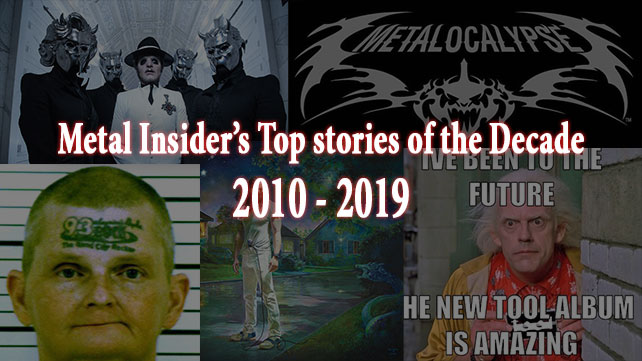 Many events that have occurred within the last ten years have been both exciting and sad. We hit significant losses in the metal community including Lemmy Kilmister, Peter Steele, Ronnie James Dio, Jill Janus, Chester Bennington, Chris Cornell, Warrel Dane, Scott Weiland, Vinnie Paul, Paul O’ Neil, Keith Flint, Kyle Pavone, Jon Schnepp, Dolores O’Riordan, Dave Z, Nick Menza, Wayne Static, Jeff Hanneman, Dave Brockie, and many, many more. The Dillinger Escape Plan said farewell, Megadeth won a Grammy, James Hetfield went back to rehab, Faith No More released a new album, Threatin happened, Arch Enemy banned a photographer, and so forth. We had the chance to highlight our top albums of the decade, and now, we are curious about what 2020 and beyond has to offer. We went through the Metal Insider archives to look back on this decade and compiled a list of our Top Ten stories.

Given, this article is from 2011, but it does more or less sum up the decade. How many memes and updates have we heard on “the new Tool album?” We have no idea, but after a quick Google search, you will discover there’s an entire Facebook page devoted to Tool memes. On this particular story, frontman Maynard James Keenan wanted to make sure fans can read. He made an April Fools joke in 2011, stating how the album will arrive in 2009, and fans most likely reacted before they finished reading the sentence. Ironically, this can also sum up how the internet has evolved. Regardless, Tool’s new album, Fear Inoculum, did progress as it was finally released eight years after this article.