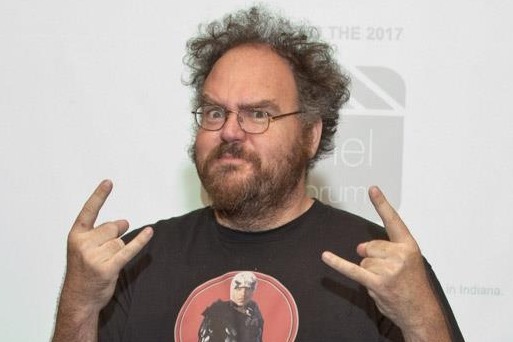 We are saddened to report that Jon Schnepp passed away yesterday (19th). The Metalocalypse director was hospitalized and in critical condition after suffering from a massive stroke on July 12th. The 51-year-old’s partner Holly Payne broke the news sharing on social media, stating:

“It is with a broken heart that the Schnepp family and I must announce the passing of our beloved Jon Schnepp, who died peacefully on July 19, 2018.

Jon ultimately succumbed to the effects of a massive stroke. He had a blood clot removed from his left carotid artery, but the bleeding could not be stopped. Irreparable and catastrophic damage was caused to both hemispheres and all brain activity ceased. His sister Deborah and I had to make the difficult decision to take him off of life support. There was no possible way for him to recover. Please understand.

I spent the last hour of his life with him holding him, laying my head across his massive chest, kissing him, stroking his hair, playing his favorite songs, and telling him over and over again how much I love him. My life has been forever changed by Jon. I feel endlessly grateful to have shared 16 years of laughter, love and incredible adventures together, including the making a feature film, as well as a television series that I hope to complete and release later this year in his honor.

Jon’s mother Miriam, his father David, his sister Deborah and I are devastated beyond measure. We appreciate your love and support, and most importantly your understanding of our privacy at this time as we grieve.

Schnepp has worked on a number of films, TV shows and music videos as a director, producer, animator, voice actor and more throughout his career. Titles include Metalocalypse, The Death of ‘Superman Lives’: What Happened, The Venture Brothers, and many more. A gofundme page was created for Schnepp’s medical bills and you can still make your donation here. Our thoughts go out to Schnepp’s family and friends during this difficult time.

The hardest thing I’ve ever had to write. Our statement regarding @JonSchnepp from myself & the Schnepp family. Our hearts are heavy. Please respect our privacy. We are still raising money for his costly medical expenses. Thank you for your support. https://t.co/2qg7a9LcJG pic.twitter.com/hBfW7l7A5M

Jon Schnepp, a truly creative and good-hearted man, has passed away. If you can, please help Holly with the massive, life-crushing medical bills? Let’s help someone who’s been devastated. https://t.co/Ortz4wmGS2

The Collider family is heartbroken over the passing of one of our own, Jon Schnepp. We will be releasing a statement at 1pm PT.

I’m sitting in the lobby of the Grand Hyatt in tears over the loss of @JonSchnepp The WORLD as a whole has lost a light, a ball of energy and a dope ass human being. My prayers are for @hollykpayne & his family. I will.miss being on #ColliderHeroes with you.

I knew @JonSchnepp as a filmmaker in Chicago. He made music videos & shorts that were really cool, very comic-book/Jack Kirby graphic inspired work. I had a little edit suite in wicker park called Bramd X and he used to edit late at night. So sad to hear about his passing.

It is with a heavy heart that I post @hollykpayne ‘s statement about the loss of our BIG SWEATY @JonSchnepp . Producing #ColliderHeroes with him was always an experience! I’ll miss him & our banter greatly. Please send out a special thought for Holly and Jon’s family. RIP Jon 😔 https://t.co/ofdv5dnba7

RIP @JonSchnepp, director on METALOCALYPSE, DEATH OF SUPERMAN LIVES, VENTURE BROS and many others. A gofundme, originally started by his family to help with issues following his recent stroke, is linked below.

This one hurts, folks. Please be kind and take care of eachother. https://t.co/8q5iy3DNx2

Just a few weeks ago @JonSchnepp and I were together in Vegas & having a great time. Cannot believe I’ll never share another nerd filled conversation about the latest movie or show with him. @hollykpayne thinking about you and sending love. https://t.co/zH4pBcnryH

Jon’s energy and love for art helped to make our nerd world a better place.
One of my favorite memories was the two of us having lunch at a Steak Shack and throwing out our crazy theories about the Kirby Cosmic Characters.
I’ll miss his passion. Goodbye @JonSchnepp RIP pic.twitter.com/adDNQRtFTU

Heartbroken to hear that Jon Schnepp has passed away. Have been a huge fan of his all the way back to the early days of AMC Movie Talk. My condolences go out to his friends, family and colleagues. Rest In Peace.

Very sad to hear that Jon Schnepp passed away. I didn’t know him personally, but he was an awesome dude