Whether it’s a Drive-in concert, a socially distanced event, or a live-streamed festival, we know nothing could replace a live show before the COVID-19 pandemic started. As cases continue to increase across the globe, the uncertainty of when life will return to “normal” remains unknown. To move forward, we should adapt to change and a new normal for life to go on, and businesses to stay open as we continue to wait until normalcy, a vaccine, aliens, a cure, etc. unfolds.

While we’ve seen concerts take place in locations such as Tennessee and Idaho, when social distancing and masks didn’t seem to exist, it’s time to reinvent and move forward with events during a COVID-19 world. Ultimately, it will prepare us for the next pandemic. It may not happen again in our lifetime, but it could happen, and this has definitely been a learning experience with a substantial amount of growing pains. Suicide Silence is one of the groups who are willing to adapt to concerts reimagined as they are currently on a Virtual World Tour, and will be touring in your living room for the rest of the month. Grab your ticket here.

We were lucky to watch the opening night of this unique and interactive experience on Thursday (2nd) for their performance exclusive to their New York City fans. Let’s face it; we weren’t going to see them live in person to promote their new album Become The Hunter, which arrived just before the pandemic in February via Nuclear Blast. It doesn’t look like their tour with Jinjer and Toothgrinder will be happening anytime soon. Therefore, seeing this virtual event is all that you can get until venues open up again, safely. We can also have another debate on if and when international acts would be able to tour in the states, what post-COVID concerts will look like, etc.

Suicide Silence went above and beyond for their fans as they’ve more than showcased their devotion. Not only do they care about their safety they also know the importance of live shows as they’ve accomplished to make each virtual stop feel personal. To “Check into” the virtual show, first you goto the website, then you hit the “Get Ticket” option to buy your ticket and move onto the next “Ticket Login,” and you have arrived at the venue. A chat box is available next to the video for fans to make new virtual friends as everyone’s invited to discuss all things Suicide Silence. At the bottom of the page, you get to enter the “merch line,” as the group has merch available just like any tour with an exclusive tour shirt and more.

Once the event begins, it is what they say it is unique compared to other live stream shows, and they’ve included many surprises. You’ve entered the Suicide Silence realm. The show opens with an introduction to the band, seeing the group’s history as the video cuts to the band in an empty venue. However, the group isn’t playing for just anyone. On this particular night, they were performing for their New York crowd, as frontman Hernan “Eddie” Hermida said hello to the New Yorkers telling all to envision the band performing in a packed Irving Plaza. As the group continued to play, there were breaks as fans were taken to an extraordinary Suicide Silence TV alternative universe-like world where anything goes. Members of the group showcased fake advertisements from meditation, disgusting pizza, a commercial filled with “hate” songs, and more.

During the performance, fans were invited to take a poll and vote which song they wanted to hear as they voted between “Destruction of a Statue” and “Feel Alive.” Ultimately, fans voted for “Destruction of a Statue.” As the show progressed, fans were invited to “text mosh” as they revealed they destroyed their own living room. Others went into a bit of role-playing, saying how they kicked the security guard in the face. After a 45min-hour long set, the group closed the night with classic footage of the band being on a tour van as though fans had an all-access pass, and everyone was invited to party on the tour bus.

Following this mentality, after another Suicide Silence TV ad, the group invited all of their New York fans who attended the show backstage for a live Q&A. This part makes their virtual event stand out more than any live-stream event we’ve seen thus far. The group explained how each gig is performed live exclusively for the city they have virtually entered, and they sit for at least a half-hour (New York went over) to chat one on one with all of their fans who attended the event.

The virtual VIP concertgoers were able to ask questions in the question box. We gathered a select few of them, and you can check them out below. One of the highlights was when someone asked about rescheduled tour dates with Jinjer, and they were honest expressing how they don’t know when shows will go back to normal. They decided to accept the unknown and move forward with what they can do now instead of wait, hence the virtual tour.

Ultimately, Suicide Silence’s virtual event is a performance like no other, and it’s an excellent formula for other bands to try out as well. It’s an intimate, exclusive, and unique experience and ultimately a close second to what we all miss: live concerts.

Check out some of the Q&A highlights below:

Favorite venue to play in NY:

“NYC is one of those places when all of the venues are gonna be sick.”

Will they do another virtual tour:

Depends on the response

What have they been doing during quarantine?

Hermida inspired to build his own computer.

Scream, I Know What You Did Last Summer, Original and remake of Night of the Living Dead

Bands that inspired them:

Meet any musician dead or alive?

What’s it like performing live without an actual crowd?

Eddie: “I wasn’t really feeling the crowd not being there because I knew you were there. I just imagined you were all there. Like every show, I imagine that there’s thousands of people. That’s how I treat every show. This is nice because it feels like we are in our own little space practicing and it helps we are doing these breaks in the middle. It keeps everyone focused and us prepared for the next jam.”

We don’t know yet. Not die from the coronavirus.

Favorite album of 2020 (aside from Become the Hunter)?

Deftones (that hasn’t come out yet)

Best and worst part of this virtual tour so far?

Worst part – putting it all together. Best – playing the show.

What city are you looking forward to playing the most during the virtual tour?

Whitechapel or I Declare War?

“Make us pick between friends.”

Whitechapel are going strong and aren’t afraid of changing their sound.

Will the tour with Jinjer be rescheduled?

“We don’t know. hopefully. We don’t know when shit will be over. You can be home and believe whatever you want but there is a virus and there isn’t a cure. We have to act like this isn’t going to end and this is what we are going to be doing and hope to make cool stuff for you later on.”

Favorite song to cry to?

Song on the Stand record… “Spleen”

“Take it to the Limit”

Do you think virtual tours will be a new thing?

Yes. “I think other people will follow-suit.”

What other bands would you like to see doing this?

“Eddie”- How did you learn to scream?

He learned to scream by people asking his name.

I learned to scream when I was in my first band and I heard Slipknot for the first time and I thought to myself that is the coolest sound a human can make and I want to be as burley as that.

Setlist:
Unanswered
You Only Live Once
Disengage
O.C.D.
Wake Up
Meltdown
Two Steps
You Can’t Stop Me
Destruction of a Statue
Hold Me Up, Hold Me Down 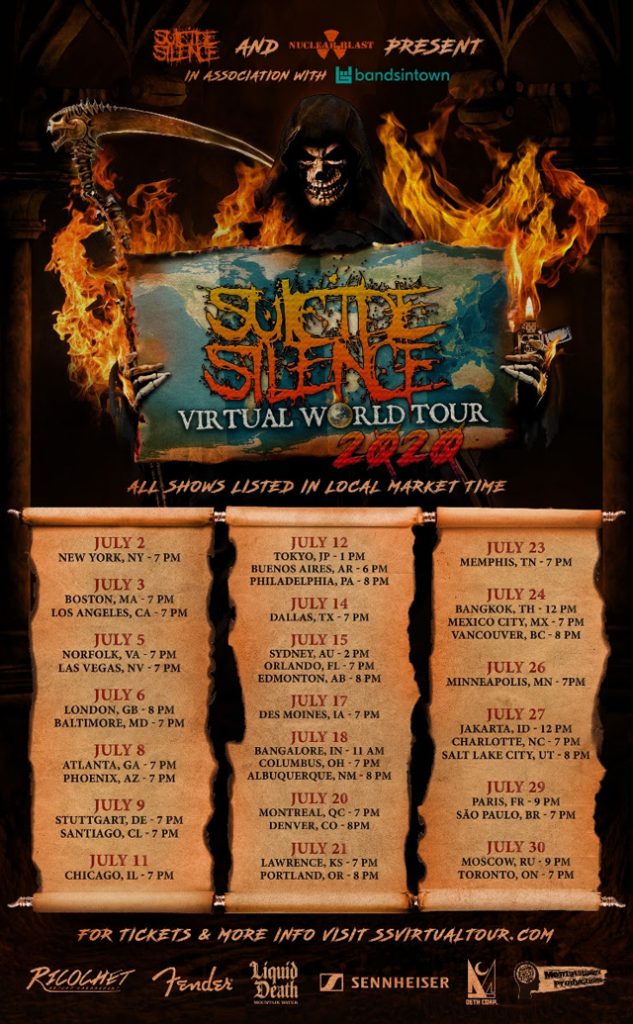