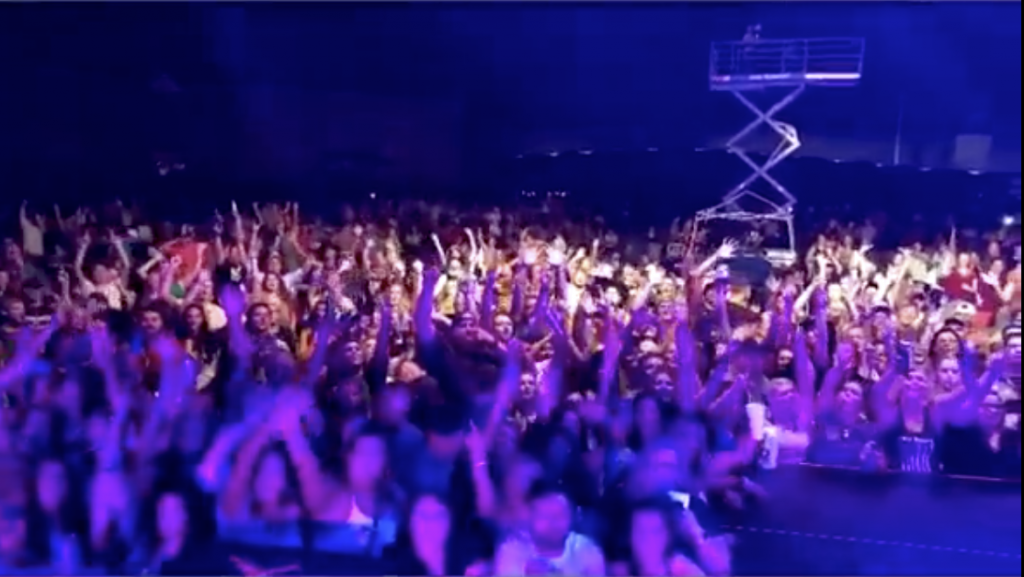 This past weekend saw two states, Tennessee and Idaho, hold concerts where social distancing seemed to be far from anyone’s minds.

On June 27, concertgoers attended a show put on by country singer Chase Rice at Tennessee’s Brushy Mountain State Penitentiary. A now-deleted video shared by Rice on his Instagram showed a packed house with no one social distancing or wearing masks (said video was shared by others before its removal). The amount of people in attendance is disputed, with some saying there were 4,000 people at the typically 10,000-capacity outdoor venue and others, like venue vice president Brian May, saying there were less than 1,000.

May told Variety that while attendees underwent temperature checks and were provided hand sanitizer, they were unable to enforce further measures. “We were unable to further enforce the physical distancing recommended in the signage posted across the property and are looking into future alternative scenarios that further protect the attendees, artists, and their crews and our employees.”

A similar scene was painted in Idaho, where the Hwy 30 festival went on as planned June 25-27. The penultimate set on the 27th was performed by Chris Janson, who drew a reported 2,800 attendees, all packed together with virtually no one wearing facial coverings. Said one attendee to Variety, “I personally one saw one person wearing a mask the entire day, and that was a merch seller.”

Both shows have been receiving backlash from fans, critics and other musicians. Tweeted country singer Kelsea Ballerini, “Imagine being selfish enough to put thousands of people’s health at risk, not to mention the potential ripple effect, and play a NORMAL country concert right now. @ChaseRiceMusic, We all want (and need) to tour. We just care about our fans and their families enough to wait.” Mountain Goats frontman John Darnielle expressed similar frustration, tweeting, “the people in this audience, along with the presenters of this show, are assuring that conscientious musicians won’t be able to work their jobs for a while, and that conscientious audiences won’t be able to see shows for the foreseeable, and to be blunt, that fucking sucks.”

The US isn’t the only country itching for live music. Israel held a beachfront concert in May at Tel Aviv’s Charles Clore Park in an effort to raise money for artists whose careers were affected by the virus. The show was put on with a permit as the country was just starting to reopen. What was meant to be a socially distanced effort was difficult to enforce and the crowd of 3,000-5,000 attendees did not fully abide by the rules. Israel has been seeing an uptick in cases as well in the last few weeks, with renewed efforts being put into place this week to avoid a second wave.

That isn’t to say that socially distanced concerts are not attainable. Arkansas was home to the US’ first socially distanced indoor concert in May, timed to coincide with the state’s reopening of concert venues. Temple Live in Fort Smith, AR operated at 20% capacity with concertgoers separated into “pods” and required to wear masks during the show, among other safety precautions. That show went off smoothly and presents one way we could see concerts make a return.

Other successful socially distanced shows have included those presented in a drive-through format. In June, German metal queen Doro played a couple of drive-through concerts in Germany where concertgoers viewed the singer from their cars (though video shows her getting a little too close to the crowd). Similar drive-through shows have been tested in other countries, as well as the US, including a recent show from country singer Keith Urban that took place in Nashville, Tennessee in May for a group of 200 medical first-responders.

There were even other shows that took place across the country that were better socially distanced than Rice and Janson’s sets. Variety reports that country artists Jimmie Allen and Jon Pardi both played shows on Saturday, though Allen’s was a drive-in and Pardi’s had boxes on the ground forcing people to be at least six feet away from one another.

Covid-19 ravaged the music world, forcing shows all over the world to be cancelled and postponed. While things are slowly going back to “normal,” it will still be awhile before concerts come back in any meaningful way. Both Health experts and Live Nation predict that live music and events won’t go back to “normal” until at least 2021.