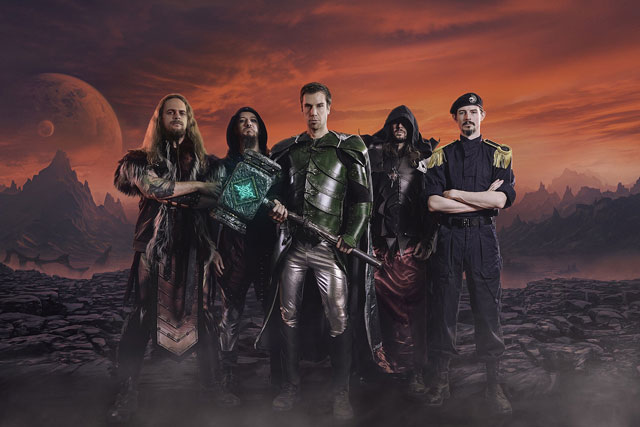 This Friday (31st), Gloryhammer’s new album Legends from Beyond the Galactic Terrorvortex will be released via Napalm Records (pre-order here). We caught up with the group’s mastermind Christopher Bowes (Alestorm) to discuss the new album, plans, and learned a bit more about Alestorm’s famous mascot, Duckie aka the inflatable giant duck.

I wanted to say, all though you didn’t attend this year, how did it feel to bring pirate metal (Alestorm) to 70000tons of Metal last year followed by Galaxy metal (Gloryhammer) this year?

It was pretty cool it was actually one of the main reasons I started Gloryhammer was because I wanted an excuse to play on 70000tons of metal more often. The POD they don’t like having the same bands back every year, even every couple of years so I thought, you know, you start a band every year, and every year I get to come back. It’s worked, it’s great. It’s fun to fuck about on a ship and get drunk and play songs. But it’s kinda the same sort of audience that comes for both bands I guess. So it was kind of, much of the same, but you know, it was the good same.

We sure enjoyed it and, can you discuss more about the distinct themes both bands have?

You can sing about anything in a band. You don’t have to, there’s no such thing as a lyrical topic that’s metal or not metal. It’s just fun. They kinda both come from the same place, just daft fantasy nonsense. Obviously, with Gloryhammer, there’s a much bigger solid storyline and characters and real fantasy storyline. Whereas Alestorm, it’s more of a setting than anything else, the whole pirate thing, but yeah, there’s gonna be some stuff about pirates, but there’s no real story line or no characters … In a way there’s more scope, because you don’t have to think about, “Oh how will this affect the storyline?” You can do whatever you want, it’s just fun. It was kind of fun with Gloryhammer ’cause you don’t have these constraints to the story, you try and write this big epic- that you know that makes sense across the albums. So yeah, it’s a challenge but it’s definitely good fun.

How is it for you to juggle both projects?

It gets stressful because you know we just finished writing and recording the last Gloryhammer album very recently and as soon as that was done, I wiped my desk clean and then instantly started writing the next Alestorm album because I handle the writing needs from those bands, like quite a lot of it so, I’ve been rushing to write another Alestorm album now and it’s literally non-stop. I never get a chance to explore any other musical avenues ’cause it’s like fuck have to write an Alestorm album, and fuck in no time it’s a Gloryhammer album. Actually I have to go back and forth just writing for one or the other non-stop. But you can’t really complain it’s something very nice to start two bands that have both got quite popular. I mean people listen to the music which has been worth it.

With Alestorm, you invented pirate metal and people love it and the latest album, No Grave But the Sea, is really good. I have noticed a significant increase in demand for Alestorm over the last few years.

Yeah the touring schedule for Alestorm is ramping up, but probably so is the touring schedule for Gloryhammer. ’cause originally, you know like I said, obviously I want any excuse to play on the cruise but the plan wasn’t to tour that much, it was gonna be we played now and then a couple of shows here and there. It wasn’t supposed to get popular, and it did ’cause we are, “oh crap that’s popular now,” so it’s really tough to juggle both bands schedules to make sure they can both do things. ’cause they both have, both bands deserve a part of this, there’s a demand for both bands to play huge tours all around the world so it’s a logistical nightmare to say the least.

Can you talk more about Gloryhammers’ new album, Legends from Beyond the Galactic Terrorvortex?

It’s much of the same. What our first (Tales from the Kingdom of Fife)was very much sort of know getting that album where we just wanted to do a part from play pirate metal. With our last one, Space 1992: Rise of the Chaos Wizards, it’s about how Gloryhammer started and all the chaos that comes with it, all that good stuff. It’s bass, keyboards and blazes and things, and now we’ve definitely expanded on that to this new album; but it’s just more huge choruses and keyboards, outer-space nonsense, battles and narration and things. It definitely doesn’t sound like any other band right now, I think Gloryhammer’s absolutely evolved with its sound, which is good ’cause you’ve gotta be unique, there’s so many bands that just sound like every other band, so it’s good fun. Gloryhammer’s sound is in some little part of the world… But it’s excellent there’s so many good songs. There’s so much to discuss, am so excited for people to hear it and react to it and, I can’t wait.

It sounds very exciting and that’s what I love about both projects. Alestorm and Gloryhammer are both different from what you hear everyday and are very creative and inventive. It’s interesting that Gloryhammer’s Legends From Beyond the Galactic Terrorvortex is coming out during the time the first photo of the black hole was taken.

Yes sweet because we were actually talking about with the band today that the timing of things because when Alestorm got popular when, 10 years ago, I don’t know that was right when all those Pirates of the Caribbean movies were getting really big, so like obviously the timing worked. And now these days it’s all about crazy superhero movies and suddenly you know we credit now from it. It’s almost like this new Gloryhammer album, it’s almost like a superhero album ’cause heroes flying across the galaxy to save the world. That sort of stuff, it’s very much super-hero kind of stuff. We’re riding the wave of pop culture.

What plans do you guys have after the summer tour?

Well this time of course there’s a bunch of festivals, you’ve got your usual European big festival nonsense. Then there’s gonna be a big tour in Europe, supporting Powerwolf who are huge in Europe like it’s your marina’s and things, 5 000/6000 casting venues, it’s gonna be insane. Then there’s gonna be a headlining UK tour in November I think and then after that it’s gonna be another Gloryhammer headlining tour in Europe and- It’s just going to be non-stop for the next eight to ten months really, just really getting the word out and just playing all over the world. And then hopefully people will love it and book throughout the shows and when more people come to the shows it means we can afford to do an even bigger show. So we have all these crazy plans of ridiculous production value, we wanna give our singer Tom (Winkler) an actual jet-pack so he can fly up into the sky during the crowd, you know during the show. There’s loads of ridiculous plans but we’ll see how it goes. It’s definitely going to be a very busy 12 months, that’s for sure.

It’s definitely gonna happen in some form or the other. Maybe it’ll be a little shitty thing with like a couple of c02, coming out the bottom. Or he can fly up on a rope, we’ll see.

With Alestorm, how often do you guys have to purchase new Duckies after your shows?

There’s a time during the summer, we were playing one of those big festivals, and every time the show went great, we would throw the duck into the crowd. We always do this thing where the duck goes into the audience and it’s crazy, and the people like throwing it around. And it makes for great photographs, so honestly the duck’s the best thing ever. I went to buy some more ducks, and then I found out that they stopped making them. And I think I bought the world’s entire supply of giant, inflatable ducks. These things they cost like 200 bucks each, and I bought like 50 of them over the last year.  I promise you it wasn’t a thing they need many of so like, we’ve run out of ducks. We don’t know what to do now, but we’re gonna probably find some Chinese supplier and get some more ducks. See what happens there. Right now there’s very much a duck shortage going on.

I remember at 70000tons last year, I saw Duckie get deflated, I was curious what was going to happen to Duckie? It’s insane that it’s out of stock. Wow.

Yeah, so we’re gonna have to make our own custom, bespoke, artisan ducks. Maybe get some Alestorm ones.

That’d be cool. For fun, do you ever for watch or read about conspiracy theories for inspiration when writing music?

Well actually for Alestorm, our last album we had this song about how the World is flat and I started reading into these weird scary stories. This guy, this thing called TimeCube, which is this crazy guy called his name was Gray, and he had this weird theory that there’s four earth’s at the same time and each rotated 90 degrees to each other, like the four seasons and then the morning, evening, afternoon, night all this stuff… There’s this weird sort of theory of how it’s four worlds and we only experience one of them. And I said, “Wow this guy is completely insane,” So I turned down to write it and I love that kind of stuff. Nothing beats a bit of controversy, you know, to get people into your band. We might have you keep thinking, “I wanna write a song.” People go “What, you can’t say that, that’s fucked up,” and it will have all these crazy fans coming together. Any publicity is good publicity. So we’ll see.

Is there anything else that you wanna say or add about the new Gloryhammer album?

I just want people to listen to it, but I don’t care if you buy it or stream it, or watch the videos. I just want people to hear it, and realize it’s awesome, and then come to shows and sing-along ’cause it’s good; it’s so good. It’s probably the best power metal album ever. And I’m not even exaggerating. It’s literally that good. 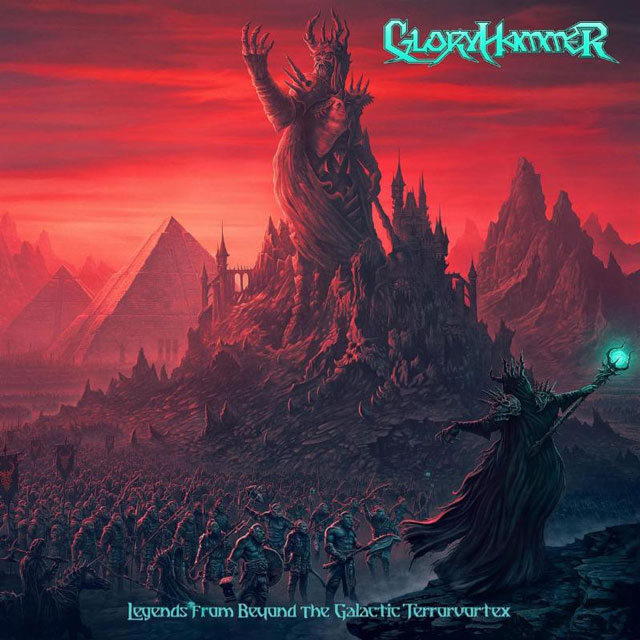