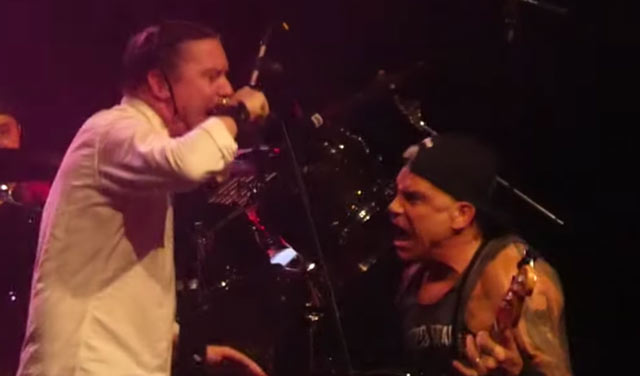 Last night (10th), Mr. Bungle were joined by Cro-Mags’ Harley Flanagan onstage to perform the classic Cro-Mags cover, “Malfunction” at Brooklyn Steel in Brooklyn New York. The concert is part of Mr.Bungle’s first round of shows in nearly twenty years. The iconic trek kicked off on Wednesday and Thursday (5th & 6th) at the Fonda Theatre in Los Angeles, where actor Danny DeVito was spotted in the audience. It’s sad to see Mr. Bungle’s reunion tour is coming to a close on Thursday (13th) in San Francisco, CA, which we can only hope they will decide to return sometime soon. Tonight (11th), the band is set to return to Brooklyn Steel for a second night featuring original members Trevor Dunn, Mike Patton, and Trey Spruance, and joined by Scott Ian (Anthrax), and Dave Lombardo (Dead Cross, ex-Slayer, Suicidal Tendencies). The group will continue to perform their 1986 demo The Raging Wrath of the Easter Bunny as well as cover songs and more surprises.

Watch the fan-filmed clip of “Malfunction” below: