Chris Adler hasn’t had the best of luck this summer considering he is no longer with Lamb of God and his Megadeth drum kit was lost in the Betraying the Martyrs’ touring van fire. However, just like everything in life, there’s always a balance. Last month, we were curious who Adler was returning to the stage with. Now that it has been revealed, Adler will be teaming up with Exodus vocalist Steve “Zetro” Souza, Vio-lence/ex-Machine Head guitarist Phil Demmel, and former Megadeth/ Black Label Society bassist James LoMenzo for a handful of shows under the name of Hail!

The group will embark on a short trek this fall, which kicks off on October 18th in Dubai, UAE and run through October 26th in Beirut, Lebanon.

“I’m looking forward to meeting the fans and exploring all of these off-the-beaten-path locations, and I’m psyched to be doing it with three of the coolest and down-to-earth guys I’ve met over my career. HAIL!”

“We’re back! In always creating that once-in-a-lifetime experience for all our fans around the world, HAIL!’s newest lineup for this tour will feature Chris Adler, Steve ‘Zetro’ Souza, Phil Demmel and myself, James LoMenzo.”

“I am so stoked to jam with all my bros Zet, Chris and James in HAIL! and bring our brand of metal insanity to the lunatics overseas. Strap in, you maniacs, it’s going to KILLER!!!”

“I’m absolutely excited to head to some places I have never played to bang my head with such loyal metal fans, and I’m honored to be surrounded by such heavy hitters like Phil Demmel, Chris Adler and James LoMenzo. HAIL!!! To anyone coming out for this metal onslaught — buckle your seatbelts, your lives will never be the same! HAIL!!!” 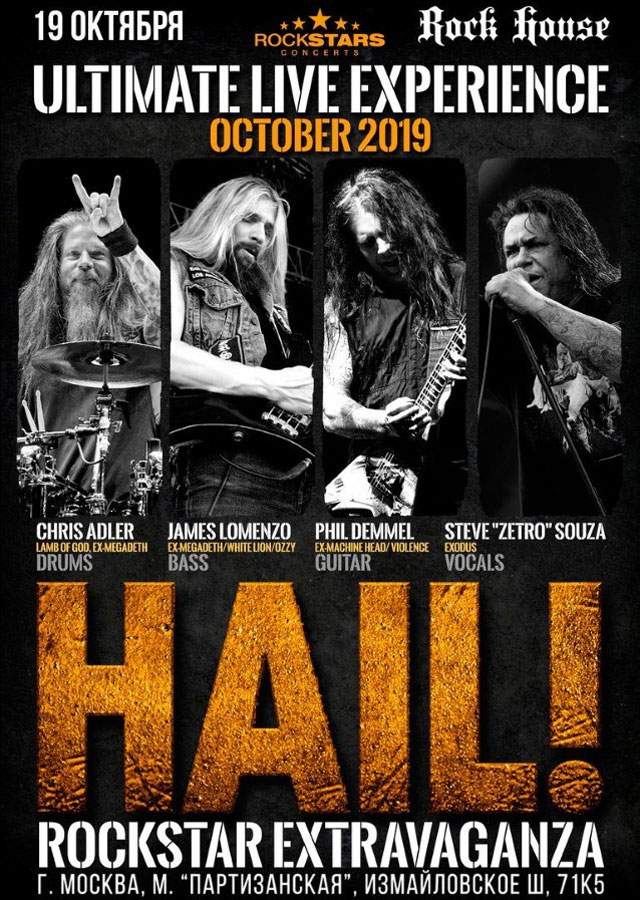