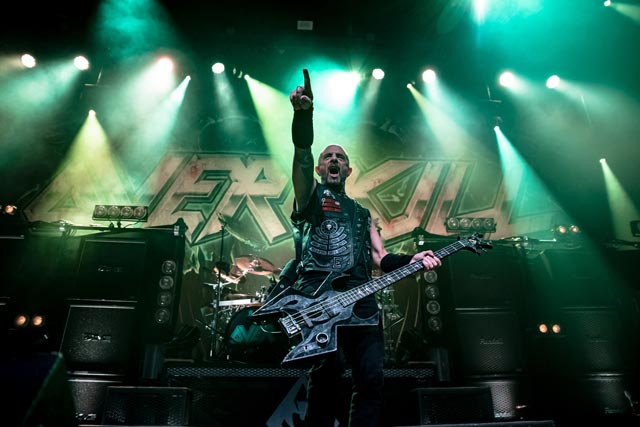 On November 13th, a frigid Saturday evening, Overkill returned home to New Jersey along with Demolition Hammer and Sworn Enemy to play a nearly sold-out crowd at the Wellmont Theater in Montclair. Overkill’s first hometown show in quite some time, over ten years to be exact. These thrashers have played close by in New York City and Philadelphia over the past decade, but nothing in their actual hometown state. For the band and their fans, this was a big deal show. In December 2019, just six months after the first leg of the Wings Over The U.S.A. tour, it was announced that Overkill would embark on a second leg spanning 17 cities from February through March, ending in Montclair, New Jersey at the Wellmont Theater. It was initially scheduled to feature Exhorder, Hydraform, M.O.D. with Billy Milano, and Demolition Hammer.

The 2020 Wings Over The U.S.A. tour would start without a hitch. Unfortunately, it didn’t last. With only two shows remaining, Silver Springs, MD., and Montclair, NJ, Overkill had to announce that those last two shows of the tour had been canceled and would need to be rescheduled later. It would be 609 days later and a slight change of bands in the shows line up, but fans would finally get the chance to see Overkill play in their hometown state of New Jersey.

It was unusually frigid for this time of the year that night, and my only thoughts heading to the show was I hope there isn’t a huge line to get in and pluck have it there wasn’t. It was also good to see that staff were asking that attendees mask up before entering. I even saw them with an extra mask for those that showed up not wearing one. Once inside, well, that was totally on you. The show was supposed to kick off at 7 pm, but for whatever reason, the first band, Sworn Enemy, didn’t go on till 7:30 witch didn’t seem to bother anyone, myself included. The delay in the set time allowed me to settle in warm up a bit before getting my gear ready.

New York City’s Sworn Enemy hit the stage first to get things heated up. I wasn’t that familiar with Sworn Enemy at all, only that they were a local hardcore band out of N.Y.C., so I wasn’t sure what to expect from them. Without much time to spare on stage, Sworn Enemy got things going right away with a sound much reminiscent of late 80’s early 90’s Biohazard, with a bit of metal and some hardcore rolled into one hard-hitting sound. With most of the crowd there for a night of good wholesome old-school thrash metal, the fans in the crowd were quickly taken in by Sworn Enemy’s set and showed their gratitude by stomping their way around the floor in a friendly little circle pit. 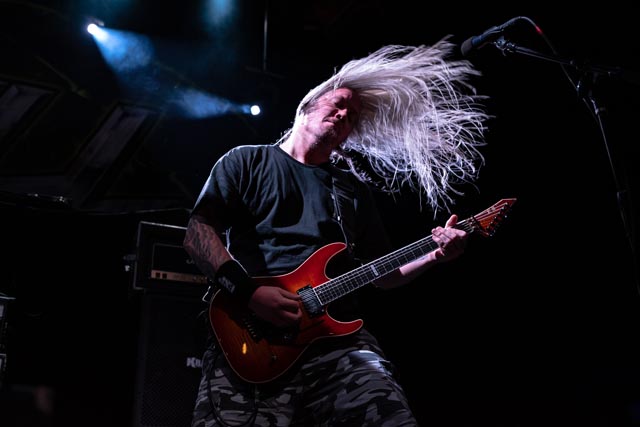 The old school Bronx thrash metal band Demolition Hammer, originally scheduled as a special guest for the original 2020 date, found themselves in the main support slot. Growing up as a young metalhead, for whatever reason, I never actually got the chance to see Demolition Hammer play live before the band broke up in 1995. Tonight was the night. It was the night I finally got my chance to see Demolition Hammer live and with the original lineup of vocalist/bassist Steve Reynolds, James Reilly, Derek Sykes, and the band’s newest member, drummer Angel Cotte. As the show got off to a late start, the clock was ticking during the band’s set time. Without any waste, Demolition hammer went right into the crippling crowd with the opening track off their 1992 Epidemic of Violence release and subsequently the title of their 1988 demo ‘Skull Fracturing Nightmare.’ In between songs, Sykes reminded fans they didn’t have much time and would waste any either. Sykes would keep it simple by announcing the title track and get right down to business. While a circle pit that had grown almost the entire floor diameter was in full swing, Sykes and co hammered through a stage pounding set. Including only songs from the group’s first two albums that ended only how it should with the opening track that started it all ‘.44 Caliber Brain Surgery’ from their 1991 debut album Tortured Existence. 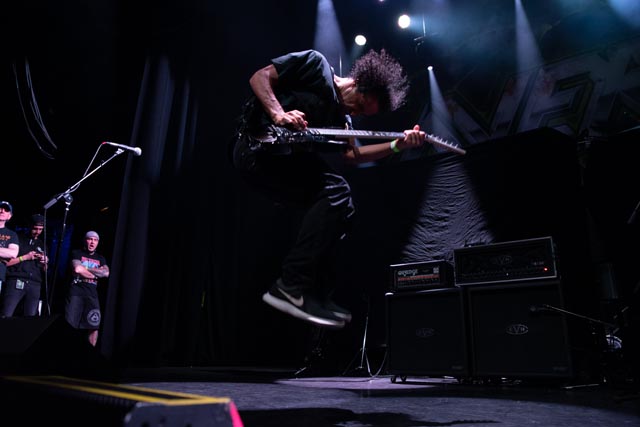 The time had finally come! It had been 609 days since the show’s original date. It was time for Overkill fans to finally get to see their band play their first hometown state show in over a decade. The stage was dimly lit in the signature Overkill green. Greeted first by drummer Jason Bittner, as he took his rightful place behind his drum kit middle finger held high, fans cheered right back with their middle fingers held high, another Overkill signature greeting, by the way. Before the band came out on stage, while the techs were doing their thing, I spotted something and thought no, it couldn’t be. I spotted the guitar tech readying a polka-dotted V reminiscent of the Randy Rhodes model.

With the stage only lit by the green lights towards the back, silhouettes of the members appeared as they made their way out on the stage. The intro for the set opener’ Last Man Standing’ began to echo through the house speakers with bassist D.D. Verni front and center for the opening seconds of the song, the lights would hit just as the thrashing would ensue with frontman Bobby “Blitz” running full speed to take his spot center stage in front of their hometown fans with guitarist Derek Tailer to his right, bassist D.D. Verni to his left, along with a special guest on lead guitar Phil Demmel of Vio-Lence/Machine Head, yes, I was right about spotting the dotted Jackson V. These veteran Jersey thrashers sounded great. Only one mishap went down when the cord from Bobby’s mic unplugged, but Blitz didn’t miss a step and just moved on to the next mic stand over.

Blitz was his usual self running on and off stage in-between solos giving his bandmates their time to shine, flipping off the crowd, cracking jokes. He even joked about his age, saying, “We’ve been doing this a long fucking time together. We’re all grey and wrinkled.’ D.D., however, seemed to have gotten a bit winded a few times during the set, but seriously can you blame them, they haven’t played a show for over a year, and they go hard when they do. One thing I didn’t feel was the vibe from the crowd. I thought going into the hometown show would be bananas, but it was the exact opposite. The pit was small. Bodies weren’t flying over the barriers like I usually see. There were a lot of people standing around just watching the show. I got the vibe you would when an opening band that no one has heard of is playing. Despite the crowd, Overkill crushed it, and what a great surprise to have Phil Demmel on the lead.

Blitz would also joke about Demmel when introducing him to the crowd stating, “After the show Phil’s only got 15 minutes to get the fuck outta here and go back to the bay.” Whether true or not, it was funny and left a few chuckles from the crowd. They finished their encore off with a nice little mix of their infamous cover of The Humans ‘Fuck You’ into ‘Welcome to the Garden State’ and back into ‘Fuck You’ to finish it all off. After a great show, it was time to leave the warm comfort of the Wellmont Theater and brave the frigid temperature back to New York.

03) Hello From the Gutter

04) Welcome to the Garden State 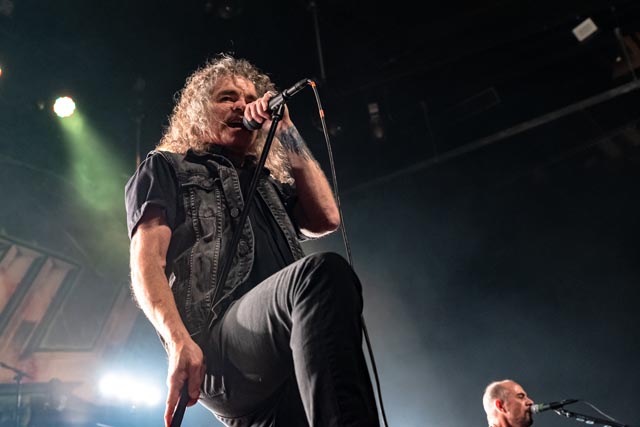 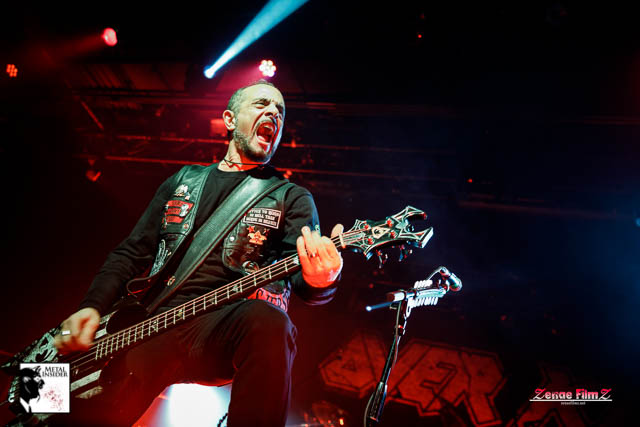