After the first day of the inaugural Exit 111 festival provided fans with an amazing showing, Saturday (10/12/2019) had a lot to live up. The longest day of the festival, doors opened at noon with headliner Def Leppard’s time on the stage set to go well past midnight to 1:15 AM. With over twelve hours of content, fans had a lot to look forward to. Sorely missing from the first day of the event, the second day highlighted even more phenomenal acts. For instance, The Heaven Stage welcomed acts, including Nothing More and Ghost, which sported a new addition for the second day. A catwalk had been added, allowing acts to walk from the stage halfway into the crowd. The Paranormal Cirque and Red Bull Motocross Experience were back for another day as well. As fans woke up from their tents or arrived at the grounds, the first soundcheck of the day filled the air with a sense of excitement.

The fun-filled day started at 1:00 PM, with Them Evils, who attracted attention over at the Hell Stage. For the Rise Above Stage, Astronoid took the opening nod. One of the more recent breakthroughs of the festival, the Massachusetts based Progressive Rock quartet, has been tearing things up since 2012. Brett Boland (Vocals, Guitar), Casey Aylward (Guitar), Daniel Schwartz (Bass), and Matt St. Jean (Drums) readied the audience for a day of music with cuts off their newly released self-titled album. The album conveys a range of emotions that tell the tale of the band’s ups and downs and perfectly captures the group as a whole, which made the self-titled record more meaningful.

Starting the show off with the album’s opening track “A New Color,” the band’s crowd grew as the morning chill wore off, and the sun arrived. The four dug into their first album, Air, with “Up and Atom” and returned to it later with tracks including “Resin” and the title track. The self-titled record remained at the forefront with “I Wish I was There While the Sun Set” and “I Dream of Lines,” highlighting the set. Much like the band chose to open with the album’s opening track, they decided to end things with its closer “Ideal World.” Indeed a treat for the live crowd, Astronoid has been keeping busy since their Exit 111 stop, touring day in and day out. Currently, in the UK, the band continues to make a name for themselves. 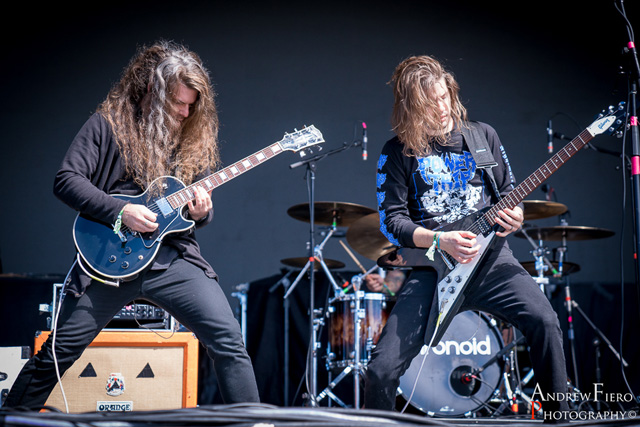 After Alien Weaponry started things off for the Heaven stage, attention turned to the side stages at 2:15 with Swedish rock group Graveyard on the Hell stage while New Years Day was set to go on the Rise Above stage. Hailing from Anaheim, California, the goth metal group were ready to energize the crowd. With vocalist Ash Costello’s unmistakable look and voice leading the way, New Years Day has been rising up the ranks touring alongside other amazing acts, including In This Moment and Halestorm. Costello is joined by equally talented musicians with guitarists Nikki Misery and Austin Ingerman and bassist Frankie Sil. The band has also employed the help of touring drummer Longineu W. Parsons III, who previously had worked with acts including Yellowcard.

After Rob Zombie’s “Living Dead Girl” provided the perfect welcoming track through the speakers, New Years Day joined the stage and immediately kicked things off with “Come for Me.” After “Kill or Be Killed,” Costello asked the crowd if they were ready to make a sacrifice. No need for a virgin or goat, this sacrifice was simply the act of throwing up their rock hands and not letting them down during the band’s cover of Pantera’s “Fucking Hostile.” While the weather was wonderfully bright and sunny, even Costello was quick to point out that it wasn’t a typical New Years Day show, which is usually set with darker lighting to set the atmosphere. That didn’t stop the band from hypnotizing fans through cuts of “Shut Up” and “Epidemic.” “Defame Me” would later act as the band’s closer before the five thanked fans before heading off stage. New Years Day growth is undeniable, and they’re quickly becoming unstoppable. Their live show screams of a band destined to very soon be headlining the shows they now open. Now touring with Halestorm in Europe, fans can’t be suggested enough to get in early to the shows to get a close look at New Years Day. 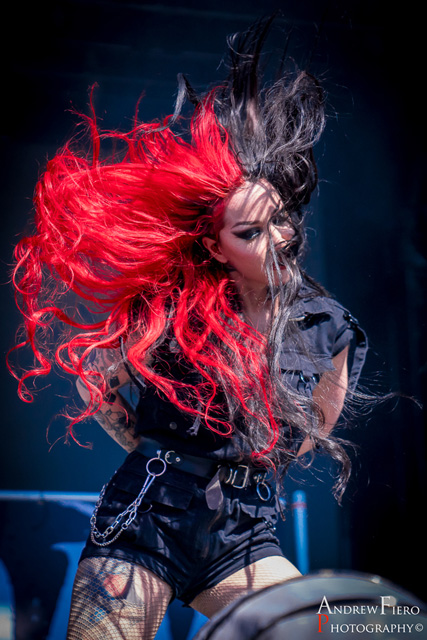 At 3 PM, rock group Fever 333 was ready to go on the Heaven Stage. The California based trio comprised of vocalist Jason Aalon Butler, guitarist Stephen Harrison, and drummer Aric Improta has only been together a couple of years and has quickly gotten the attention of their peers and fans, winning the Kerrang! Award for Best Song with “Burn It.” Lead by the always chaotic and unpredictable behavior of Butler on stage, their live show was set to become proof that even the extra-large Exit 111 main stage may have been too small to contain them. Throughout the performance, all three members took advantage of every inch of the platform. Both Butler and Stephen Harrison ran up and down the catwalk to get a larger scope of the fans playing in front while Improta took every opportunity he could to jump from his drum set.

Of course, that all means Nothing if the tracks aren’t worth listening to, and that’s where Fever 333’s shows become whole. Opening with “Burn It,” the three immediately had fans crowd surfing and headbanging. “Only One” continued the fun as Butler threw the mic down the catwalk before baseball sliding down while collecting it. Before “Made an America,” the vocalist took some time to address shortcomings in our nation that he’d like to see addressed, promoting a need for unity between us and those around us. A beatbox and drum solo would break up the setlist halfway through before tracks, including “Pray for Me” and “The Innocent,” continued the hard-hitting tracks, closing out with “Hunting Season.” Fever 333’s live shows, or more accurately demonstrations as the band prefer they be called, pack both an amazing punch and meaning into every single lyric. By the end of the set, the band had left it all on stage, right down to Butler’s coveralls, which were shed during the latter portion of the set. The group continues to spread its message, currently touring through Europe. If the last two years are any sign of what’s to come, the sky may be the limit on Fever 333.

The spotlight once again turned to the side stages at 4 PM with thrash metal band Power Trip rocking out on the Hell Stage while Indie Rock group Dead Sara was tasked with the Rise Above Stage. The hard rock group out of Los Angeles is fronted by the very talented Emily Armstrong, who’s backed by guitarist Emily Armstrong and drummer Sean Friday. The trio provided the tour with a completely different sound for the day, one that showed inspiration from various rock genres, including blues and soul, while ultimately becoming its own unique thing.

The sun was heavily shining down on the Rise Above stage as the group graced it. Opening quickly with “Radio One Two” before the band sped things up a bit with the more gritty “Monumental Holiday.” Hints of legendary guitarist Kurt Cobain was visible in Armstrong’s blonde moptop and delivery. This may not come as too much of a surprise to fans of the group as their 2015 cover of Nirvana’s “Heart-Shaped Box” gained notoriety after being picked up for Playstation’s Infamous Second Son. While that cover wasn’t on display on this day, their cover of Rage Against The Machine’s “Sleep Now In the Fire” mere weeks before the band coincidentally announced their 2020 return. The group closed out their set with “Weatherman” as fans gave the group some love. Taking the rest of the year off, Dead Sara will build off their past of amazing live shows when they’re set to hit the road throughout the US in early 2020. 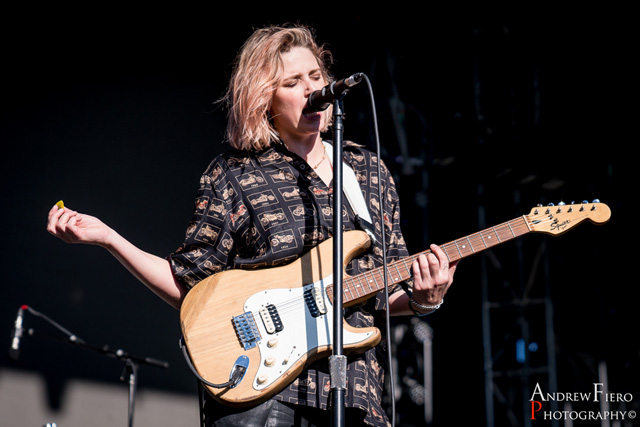 All eyes soon turned back to the Heaven Stage, where Nothing More’s band logo lit the platform in a bright red hue. The Hard Rock group from San Antonio, Texas has become a bit of a festival mainstay the last few years with Jonny Hawkins (vocals), Mark Vollelunga (guitar), Daniel Oliver (bass) and Ben Anderson (drums) continuously working in perfect harmony to create one of the best live shows around. A band that could comfortably rest on the absolute strength of their music, Nothing More adds to their set with the use of the famed Scorpion Tail along with various other contraptions. The Scorpion Tail is a multi-use item built from scrap metal and auto parts, coming in at 14 feet tall and has, in many ways, taken on a life of its own. In lesser hands, the use of it could have easily come across as a gimmick, but Nothing More’s integration of it throughout their sets has made it more akin to a 5th member of the group.

Right from the outset, the band set themselves out from the pack as Hawkins climbed a giant ladder to sound the alarms that Nothing More had arrived. This led to “Let ’em Burn,” with cuts of “Christ Copyright” and “Don’t Stop” soon following. The band put their gadgets to the test with a bass solo that saw not only Oliver but soon Vollelunga and Hawkins joined in. As the three men plucked and drummed on the bass, Anderson kept a steady beat. The bass was able to orbit around them as they pushed it one way or the other and also flip quickly between riffs. After a masterful set, including the emotional “Jenny,” the band turned all attention to the Scorpion Tail. Fully extended and raised into the air, Hawkins used the contraption and his voice to lead the group into a cover of “Skrillex’s “First of the Year,” wreckless rocking the tailback and forth as the song continued. The band closed things out with “Salem (Burn the Witch)” as the sun began to recess for the night.

It’s easy to feel out of breath after witnessing Nothing More play live. The ingenuity and uniqueness of the set have earned them a spot on many festival’s main stages. It would not be far fetched to believe that before long Nothing More will be precisely the kind of band headlining festivals such as Exit 111. With their intoxicating live performance, look for the group to continue towards their dominance of the music world. Nothing More next set their eyes on Mexico’s Knotfest on November 30th, sharing the stage with bands including Papa Roach and Godsmack before ultimately being closed out by Slipknot themselves. 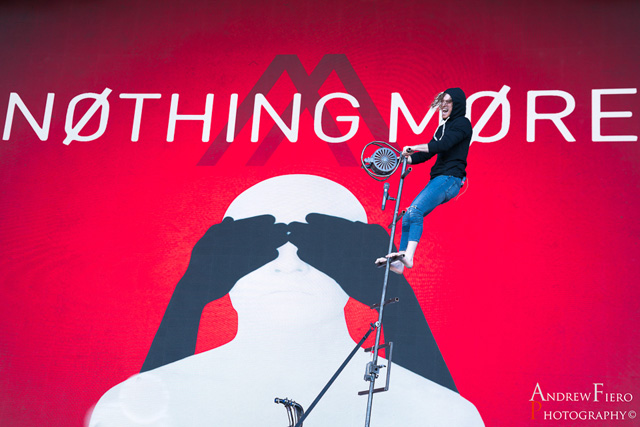