While the dinner rush started amongst the various food vendors, Blackberry Smoke and Whitechapel were set to play at 6 PM on the Rise Above Stage and Hell Stage, respectively. From nearby Knoxville, many of the Tennesee fans treated Whitechapel as the hometown heroes of the day. The deathcore band made up of Phil Bozeman (vocals), Ben Savage (guitar), Alex Wade (guitar), Gabe Crisp (bass), Zach Householder (guitar) and touring drummer Alex Rüdinger have been enjoying the wave of their seventh album, The Valley, which released earlier this year to critical acclaim. Often imitated, though rarely successfully duplicated, the three guitar set-up backing Bozeman’s vicious vocals have kept the Metal band at the forefront for fans.

The adrenaline-pumping set kicked off with “Forgiveness is Weakness” and didn’t let up once for the thirteen-track set. Strobing lights and tons of movement kept fans banging along for tracks, including “The Void” and “Elitist Ones,” with songs rarely introduced. Instead, the group rattled one track off after the next in quick succession, fitting as much as they could within their pre-allotted time. Perhaps intentionally saving them for a local crown, the band debuted the live offering of two tracks with “Third Depth” and “Hickory Creek” both getting their first taste of a live show.” “The Saw Is The Law” marked the end of Whitechapel’s time.

Whitechapel is currently delivering the goods overseas throughout Europe. The band returns to the US, and in fact, to Tennesee, mid-December, for a show in Knoxville. The group’s no BS approach to Metal leaves fans with no choice to move but to get in the mosh pits and enjoy the show. 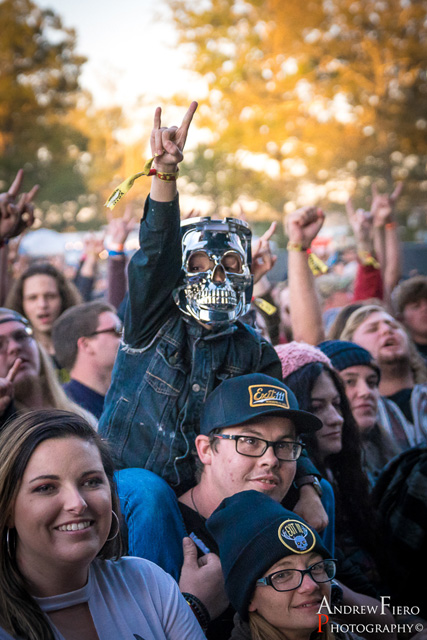 Much like the monster, they’re named for, the Heaven stage’s next act was ready to burn things up for the massive crowds. Originally calling themselves Godzilla, the French metal band has since become known by its universally known name Gojira. While the Heaven stage’s acts before and after them focused on innovation and over-the-top theatre, Gojira’s roll on the mainstage was to provide technical perfection. A straight forward metal band, Gojira’s magic is in their music and lyrics, with both leaning far away from tried and true methods, setting them apart from the rest of the metal scene. Together since 2001, Joe Duplantier (Vocals, Guitar), Christian Andreu (Guitar), Jean-Michel Labadie (Bass), and Mario Duplantier (Drums) form an act seeking, and often achieving perfection.

Dark blue hues would make lit the stage through opening tracks “Oroborus” and “The Heaviest Matter of the Universe.” Heads banged, and bodies surfed as the fun continued with “Flying Whales” and “Love.” Fog machines worked overtime, and the band did too with “The Cell” and “The Shooting Star,” taking their time in the spotlight. There was no need for pomp nor circumstance throughout the set. The focus was clearly on delivering a metal set worthy of the band’s lineage. Each track was given the dedication it deserved from the quartet. Emotions rose for the wild track “L’Enfant Sauvage” before the group seized the night with “The Gift of Guilt.”

Wanting to take part in the fun both sides of the US were having, Gojira was in California the next day as part of the Aftershock Festival, taking place in Sacramento. Sunday’s Lamb of God performance would mark the only other act to make the trip across the US for both shows. For Gojira, with the sunshine, a thing of the past, one thing entirely out of the festival planner’s hands started to threaten the fun of its goers as the temperatures began to dip noticeably. Off the road for a while, Gojira heads back out in May of next year in support of nu-metal kings KoRn in a combo sure to satisfy fans. While some made the trip to their cars or campsite to add on the layers, Sleeping with Sirens and the Cheap Trick treated fans to hour-long sets, both perfect for keeping fans rocking.

As the clock came close to 9, Ghost’s monstrous set production caught the attention of everyone near the Heaven stage. By far the most expansive set of the weekend, the cathedral setting was massive, with a large staircase as the center focus. For Ghost, presentation is everything. Tobias Forge led the way under the moniker of Cardinal Copia. He delivered his sermon to concert-goers while the rest of the band, collectively known as “A Group of Nameless Ghouls” created the music to back his words. While the heavy metal band hails from Sweden, they do have some ties to the Tennesee area, having recorded their 2014 album, Infestissumam, in the Nashville area. That album would go on to start a trend for the group, winning the Grammis Award (Sweden’s equivalent of the Grammy) for Best Hard Rock / Metal album that year. The group repeated that win in 2015 and 2016 with Meliora and Popestar, respectively.

With the stage set and the congregation ready in masses, Ghost burst onto the stage with “Ashes” as Cardinal Copia sauntered along the catwalk. Copia’s singing through his prosthetic face added a hellish aura to the “Faith” and “Mary on a Cross.” The Group of Nameless Ghouls, while not given identities, were given plenty of time to shine, as the guitarists each took turns on the catwalk to show off their abilities with all spotlights on them. “Ritual,” “Miasma,” and “Year Zero” were among many tracks up for display as the mood was set with lights, smoke, and even a concussion bomb kept fans enthralled and on their toes. “Dance Macabre” played the role of the penultimate song before “Square Hammer” acted as an “Amen” of sorts to end the show.

Ghost is one of those acts that could have easily been done so wrong. The over-the-top nature and direction the band chose to take could have backfired in the wrong hands. However, much like fellow Swedes in Avatar have made their deranged circus-style act work, Ghost has made the gothic church motif unmistakably theirs. Their songs capture your attention, but the show is the star. That show is currently treating European fans to an unforgettable night, but we can certainly pray that Ghost soon makes their way back to the USA. 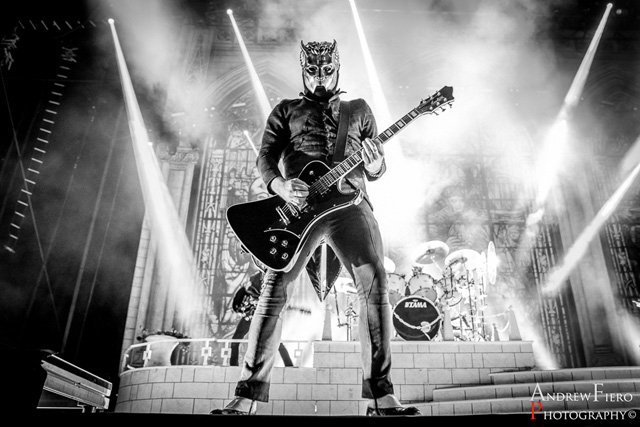