While Blues Rock mainstays ZZ Top closed out the Rise Above stage, Heavy Metal’s Mastodon was tasked with giving the Hell Stage its final show of the night. The Atlanta Georgia based band composed of Brent Hinds (guitar, vocals), Bill Kelliher (guitar), Troy Sanders (bass), and Brann Dailor (drums) have been earning tons of respect from the metal community since coming together in 2000. Their second album, Leviathan, was awarded album of the year from multiple publications such as Revolver. More recently, the band won “Best Live Band” in 2017 by Metal Hammer Golden Gods Awards alongside the Grammy Award for Best Metal Performance in 2018 for “Sultan’s Curse.”

Utilizing trippy lighting patterns and fog machines, the band’s live show opened up with “The Motherlode” with “Crystal Skull” and “Megalodon” soon following. The cold weather wasn’t just felt by the fans, with Kelliher noticeably reaching into the heating tubes that warmed the stage to heat his hands between tracks. Still, the band was focused on delivering a killer set to the Tennessee crowd. The tie-dye patterns continued to light the night’s sky through “Black Tongue” and “The Czar” before “Mother Puncher” arrived. The night’s sky continued to light up for “Steambreather” before the band ended their night on “Blood and Thunder.” An advanced course in headbanging, Mastodon’s live set had fans moving throughout. The lighting and colors an other-worldly feel to the band. 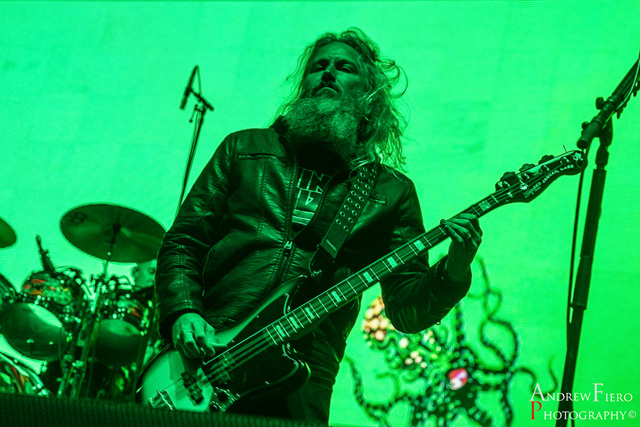 Even with the temperatures reaching very frigid, the Heaven stage was jam-packed with fans. Many of them were wrapped in blankets and dressed in heavy jackets, still fully anticipating the arrival of Rock legends Def Leppard. The band almost needs no introduction, with their entry earlier this year into the Rock and Roll Hall of Fame perfectly encapsulating the triumphs the band has achieved in their over forty years together. Since 1977, the group has been cranking out number one hits and is one of just five bands with two original studio albums selling over 10 million copies in the US, alongside standout acts like Van Halen and Pink Floyd. It became instantly clear that neither the band nor the fans were going to let that stop them from partying well into the night. At a quarter to midnight, Joe Elliott (vocals), Phil Collen (guitar), Vivian Campbell (guitar), Rick Savage (bass) and Rick Allen (drums) were ready to heat the crowd.

The band went right into high gear with “Rocket” as the giant screen canvasing the back of the stage portrayed a battle-torn cityscape. Soon later, the screen would illuminate up the crowd with a Vegas-style theme as the band went on with “Animal.” With the band gearing up to take on a Vegas residency, the backdrop has become more fitting. The temperature dropped into the ’30s, but it didn’t stop fans from singing along with hits including “Animal,” “Too Late For Love,” and “Hysteria” while keeping together for warmth. “Switch 625” provided the festival-goers with a little extra, as Allen enjoyed some alone time on stage, providing the crowd with a riveting drum solo. Def Leppard closed out the set with “Pour Some Sugar on Me” before leaving the stage to huge applause.

Even with the time pushing 1 AM, and the cold making things close to unbearable, fans stuck around as the band returned to dole out an encore featuring hits “Rock of Ages” and “Photograph.” It speaks volumes to the band’s live show that the grounds were still packed with fans as the night came to an end. Def Leppard’s continued dominance over the hard rock genre is unparalleled. Travelers may always say “What happens in Vegas, stays in Vegas,” but rest assured that their upcoming residency will have fans left with an impression they’ll be dying to talk about.

Unlike the night before, fans were quick to recess after the final band’s performance. The chill in the air made for a less social experience on the campgrounds. Some fans chose to sleep in their vehicles for some extra warmth. Still, Mother Nature aside, day two brought the festival-goers a full day of fantastic music to check out and was easily a huge success. With one day left, fans were excited over what the final day of Exit 111 would bring. 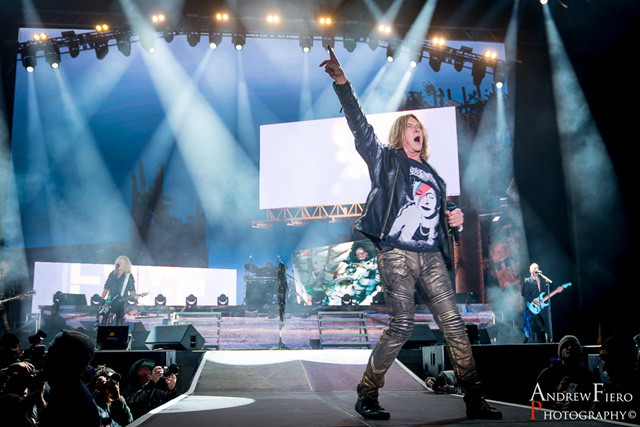