This Friday (28), Brooklyn photographer Nathaniel Shannon will be expressing himself in an entirely different medium, as his debut album Trespasses will be released via Aqualamb Records. The album, released under the name Nathaniel Shannon and the Vanishing Twin, is a dark Tom Waits-like collection of Shannon’s bedroom recordings from over the last decade, and wasn’t initially meant to be heard by anyone. The collection was mastered by Today is the Day’s Steve Austin. Well known in the metal and hardcore community for his concert photography, we thought we’d ask him to go over some of his favorite photographs and the stories behind them.

Coalesce did a reunion tour in 2007, and I made this photograph of Sean at the Magic Stick in my hometown of Detroit MI. They decimated the stage and brought back for a night what was one of the good things of ’90s hardcore. Dudes that could shred playing challenging music for music nerds.

I made this photograph of Jake in 2002 in Detroit. I always loved this shot because he’s wearing a Gordy Howe jersey, the strongest man of all time on the ice.

Dillinger is breaking up soon, and I’ve fortunately been able to document the chaos of the band from coast to coast. This photograph was made at the Crazy Donkey on Long Island back in 2009 or so. Probably the sickest spit shot I’ve ever captured of anyone.

Another band I’ve been friends with since I started shooting, well over a decade ago. Sammy Duet is one of the gnarliest dudes I’ve ever met, as well as a great song writer. I’ve made a lot of really great photographs of him over the years, but this shot at Saint Vitus in Brooklyn from 2015 captures the soul of his being ripping faces off.

Fall of 2014 I ended up in mexico for one of my best buds weddings. My girlfriend and I were lurking around Mexico City and saw that Green Jelly was playing. What a rad band to see from my childhood playing to one of the most sincerely stoked crowds I’ve ever witnessed. William Manspeaker commanded the crowed to bow to him and they followed.

Rollins played at Saint Andrews hall in Detroit in 2000. I was pretty young in my career and getting to photograph one of the most hilariously loudmouthed dudes in punk rock/hardcore/whatever you want to call it was pretty exciting.

I had seen king diamond several times, including him jumping out from behind a curtain and putting a curse on me years ago. I finally got to shoot him in 2014 in New York. I love this jam because he’s looking right into my soul. It was sick.

When I first moved to New York in 2008, a buddy called me and asked if I wanted to shoot Motorhead, Dio, Sabbath and Priest. How could I turn that down? Motorhead was obviously fucking sick and I’m grateful I got to photograph Lemmy and Dio both before their passing.

A friend asked me to photograph Type O at Harpos in Detroit in 2007 for him. Upon pulling up to the club, my buddy and I saw a car burst into flames in a White Castle drive thru. Type O is still one of the heaviest bands I’ve ever seen.

Goatwhore were out with Watain and I was hanging on the side of the stage and got goat blood all over my clothes and smelled like death for days. One of the most visually engaging live bands touring today.

Nathaniel Shannon and the Vanishing Twin’s Tresspasses will be released on Aqualamb Records this Friday, October 28. You can pre-order it, as well as a 100+page book with photo-collages made especially for the album, here. Shannon will be celebrating the release of the project this Friday at Brooklyn’s Church of the Ascension in Greenpoint, Brooklyn. 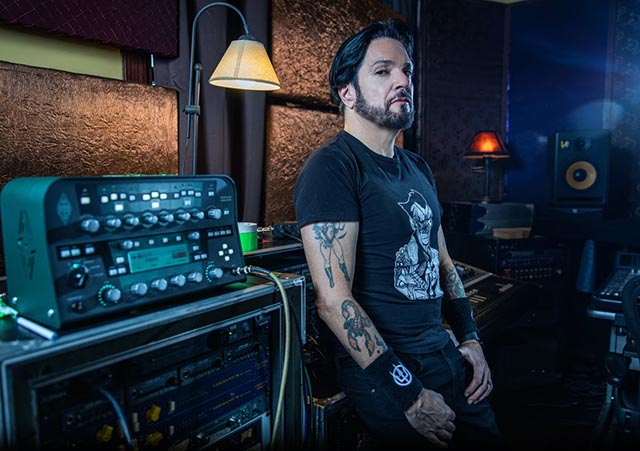