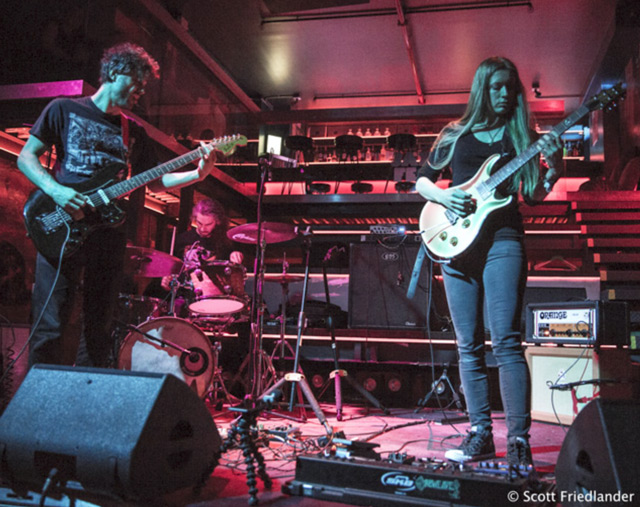 Metal Inside(r) Home Quarantine is Metal Insider’s new column during this time of isolation due to the COVID-19 pandemic. We asked artists five questions on what’s been keeping them busy ranging from their favorite movies, food they’ve been eating, music they’ve been listening to and more. We caught up with Titan To Tachyons’ Sally Gates as she’s been spending this time working on the group’s debut album Cactides, which is now available to stream via Brooklyn Vegan.

I’ve spent most of the time working on the Titan to Tachyons album release, and composing for a feature film soundtrack. Creating pieces for the film involved teaching myself to program midi instruments and drums. It’s been a pretty fun learning curve, and I’ve gone down a ton of wormholes messing around with different sounds and composing styles. As a result I’ve been writing and improvising on the keyboard more than my guitar lately. I also had a couple of art commissions, and worked on some of my own pieces, using paint and charcoal. For sanity purposes I’ve been exploring beaches, forests, and reserves around NY, as well as getting burnt out with video calls, reading, exercising, and most recently have been able to play with other musicians again! We just filmed a live set with Titans at The Sultan Room in Brooklyn, which almost felt like playing a show. 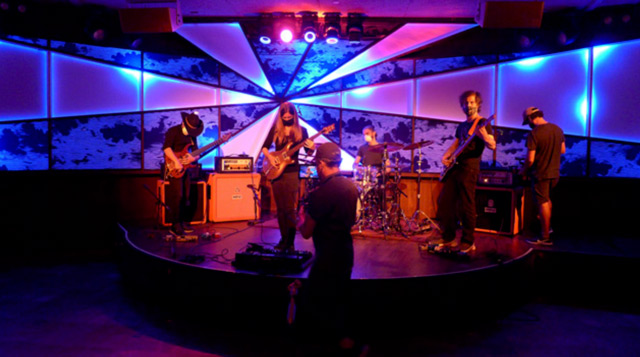 My food prep routine didn’t change too drastically, as I usually cook every meal anyway. I think the most extra effort I put in with all the extra time was making Thai curries and experimenting with eggplant recipes. Still haven’t touched bread-making, and now that restaurants are open again I’ve gone through excessive amounts of sushi.

I have a stack of 5 or 6 books right now that I’m reading sporadically.. which probably shows how shot my attention span is. These include: DMT: the Spirit Molecule, Aldous Huxley, Hunter S Thompson, Fun With Your New Head, Kafka, George Orwell, The Secret History of the World, as well as combing through a lot of art books for inspiration. For TV and movies I’ve gone through Eraserhead, The Witch, Parasite, The Wicker Man, and a few documentaries such as What Happened Miss Simone, Quincy Jones, Epstein. I just finished the Hannibal series and followed that up with Silence of the Lambs. Also Midnight Gospel, which I would highly recommend for anyone interested in philosophical and existential discussions.

I think for anyone who’s a creative or hard working type, it’s been a bit of a mind-fuck trying to stay productive and motivated during this time. We’re used to everything being full-on all the time, with a never ending set of deadlines – shows to prepare for, music to write, recording sessions, etc. When that all drops away in an instant, it can be hard to know how to react and carry on. Personally, I always felt useless if I wasn’t consistently producing, whether that was through music, art, or landing gigs. I think isolation is a great opportunity in many regards, as it allows you to step away from that constant hustle, really evaluate what you’re doing in life, and spend time on things that actually make you happy. Sometimes this would allow for periods of exploration and growth, but on the other side, there would be weeks at a time where I couldn’t bring myself to do anything productive. This wasn’t something that I was proud of, but after talking to a lot of friends who were going through similar experiences, I was able to accept that sometimes it’s ok, and necessary, to take time off.

So I guess to sum up, my advice would be to realize that that’s all ok. Whatever makes you happy, and allows you to cope with the most unprecedented period in our lives so far, is absolutely fine. I think looking around you and being grateful for what you have is key to remaining positive – even for simple things like having a roof over your head or having good friends and family in your life. Look after yourself and your mental health – exercise, meditate, get outdoors for walks if you’re able to. Realize that even though the time off seems infinite right now, (which makes it easy to waste it), appreciate the current moment, and use it to do something positive for yourself or others. Conversely, keep in mind this is still only a blip in the greater scheme of our lives.