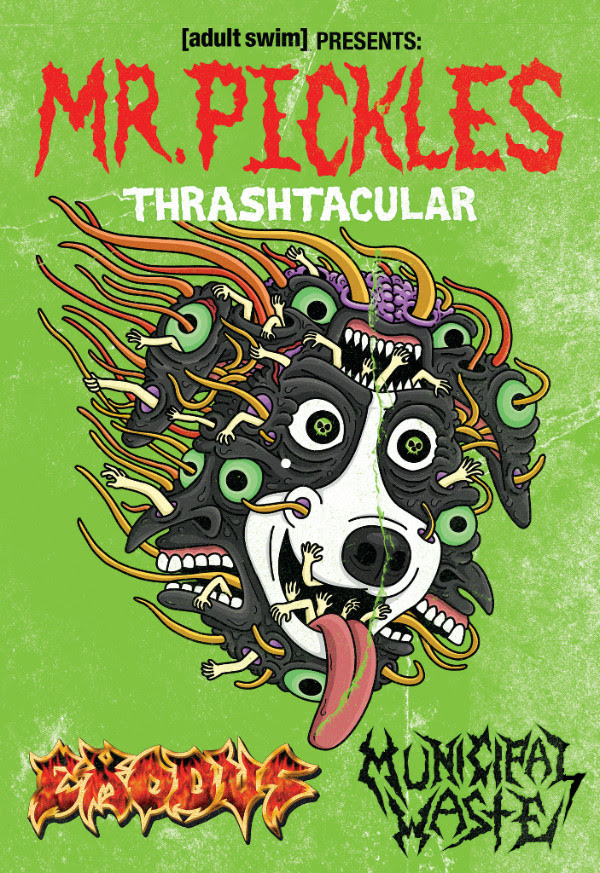 Next Thursday (22), Exodus and Municipal Waste will kick off the Mr. Pickles Thrashtacular tour, which might be the most metal tour ever sponsored by an animated show. However, Mr. Pickles isn’t just any animated show. Inspired by Lassie, it’s a show about a family and their lovable dog. Unbeknownst to their family, however, their dog is a satan-worshipping serial killer. It’s dark, twisted, and hilarious, much like the promise of a tour featuring one of thrash metal’s all-time greats as well as a band that they’ve inspired. We caught up with the show’s creators, Will Carsola and Dave Stewart in advance of the February 25th premiere of the show’s third season to discuss the tour, the Richmond arts scene, and if they’re ever recognized in public.

Tell me a bit about the Richmond scene that allowed for this tour to happen.

Will: Adult Swim pitched us the idea to do a tour in support for the show. We knew from the start that we wanted to get Municipal Waste on board because they’re friends of ours, and I feel that their energy fits the energy of our show. We’ve always been big supporters of the whole Richmond scene, regarding the music and all, so it just seemed like the perfect fit.

Was Exodus on board from the beginning, or did they join in later?

Will: That was more so Adult Swim’s doing. They pitched us the idea of Exodus joining us and we thought it’d be great.  When we mentioned it to the guys in Municipal Waste they were pretty excited. I’m sure they’ve toured together before so they’re all familiar with each other.

And you’ve worked with Municipal Waste before, right?

How established were you guys at that point when you worked on that music video?

Will: We had already put out a DVD called Teenagers from Marz, and I think we were pretty established in the underground subculture scene of graffiti, skateboarding, punk/hardcore music, etc. We were no strangers to the scene by then.

When the idea of an Adult Swim show sponsoring a tour came about, were you on board from the get-go?

Will: Oh yeah. We were really excited actually. I thought it was a unique way to promote a show. It fit well with the sort of things that we like to do.

Let’s talk a little about Mr. Pickles in general. It has a super metal sensibility. Was it like that from the jump? Obviously the idea of the show is metal as fuck in the first place, but did you know it would be this ridiculous when it started?

Will: The general idea of the show is twisting the original concept for Lassie. The characters are more modernized, there’s much more crazy things happening in the town, which we think feels a lot like an old town close to something you’d see in Lassie. We have the ol’ classic family and their house pet is a murder-crazed, evil dog. So we thought about the intro for the original Lassie and how it was very soft, and we figured we’d do the exact opposite and make it as metal as possible.

I’m assuming you guys are fans of metal.

In what ways does metal influence the show?

Will: I think it’s more about the attitude of metal and punk music, this do-it-yourself mentality. You do it for yourself because you love it, you don’t really give a fuck how other people feel about what you’re doing or making. That’s always been our attitude when we create stuff. We’re not really making it for the world necessarily; we’re making it for ourselves. We’re just lucky that people like it. And I feel like that’s the attitude of metal people, too.

Is there anything that Adult Swim has said no to?

Will: They don’t usually give us notes on something being necessarily too crazy.  Their notes are really about story. We have a lot of crazy ideas in here all the time that we’d love to do, but it’s all about finding the right story to tell the crazy idea.

In terms of the third season, which is coming out soon, how has it evolved since the first two and what can we expect from it?

Will: This season is really heavily themed, or rather we have a lot of episodes that are heavily themed. We have one that’s like a western. We have another episode that’s very 80’s themed, feeling a lot like a TV show or movie from the 80’s. Another one we’re super excited about is like a play on Cops, but it’s a ‘Sheriffs’ episode, handheld camera style and Sheriff is the subject so they follow him around the whole town for a day. We went about it a little differently, but it’s still true to the Mr. Pickles world.

In terms of voice-overs and such, are there any crossovers from this tour and the show itself?

Will: No, none of those guys are going to do voiceovers on the show.

Is that something you would consider doing in the future?

Will: We get excited about working with musicians, but we’re really particular about the voice being absolutely right for that episode. We did get Henry Rollins to do a voice this season, which we’re really excited about. He’s awesome to work with.

Dave: Yeah, he’s a very militant, commander type of character in this episode and it’s all about a pair of shoes.

Are you going to be at any of the shows coming up?

Will: We’ll be at the Anaheim date, for sure. We’ve each got a lot going on right now so we’re not really sure when we’ll be able to get out for other dates.

Dave: We’re going to try to make it to some of the other shows. But as of right now Anaheim is the only one that we’re sure about. We’re excited about it.

Do fans of the show recognize you?

Will: Occasionally. I had someone recognize me the other night. It’s a little weird. You know, it means they’re really creeping on us, using the Internet to figure out who makes the show and what we look like.

Dave: It’d be easier if we talked in the characters’ voices all day long when we’re off work, but I don’t walk around all day talking like Sheriff. Although, that would be fun.