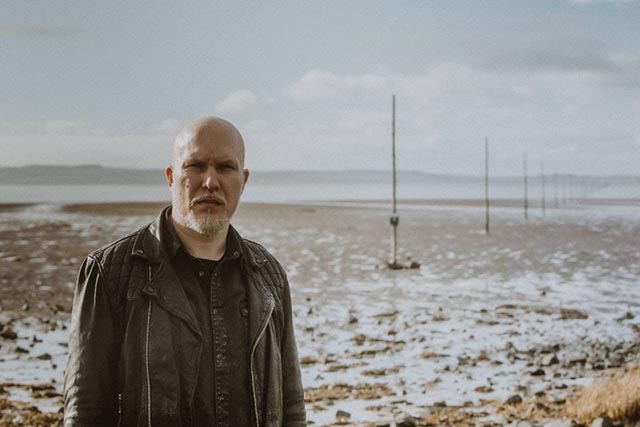 Northumbrian doom project ARÐ have released their debut album, Take Up My Bones on February 18th via Prophecy Productions. The name of the band is taken from an Old English word meaning “native land,” in the dialect of the Anglian Kingdom of Northumbria. The record revolves around the relics of the Northumbrian saint Cuthbert (634-687). We caught up with the group’s mastermind Mark Deeks to discuss the new project.

What was the process like creating the debut album, Take Up My Bones during the pandemic?

Is it wrong to say that it possibly helped, in the nicest possible way? Work-wise it’s true to say that life as a professional musician was really challenging as lots of my regular kind of musical work either disappeared or needed some significant virtual reworking. But yet, somehow, being stuck at home a lot really focussed the mind in some ways. The writing for the album actually began back in 2018, but things really started to take shape in early 2020 and we recorded in November of that year. The recording session actually took place at a time where there was great debate publicly as to what did or did not constitute “traveling if absolutely necessary” from the point of view of the pandemic restrictions here in the UK. Also, as I live in the north east of England and the studio was in Wales, and the Welsh government were operating somewhat stricter restrictions at the time, I was ready to argue my cause at the border if stopped!

Really humbling to be honest. I hadn’t expected such a passionate response from people. This isn’t music for everyone and requires a longer attention span than is the norm these days. Obviously, every musician loves the music that they make and thinks that other people should like it too. But the way that people have been reacting, both in messages from people who have bought the album and in a lot of reviews, has taken me by surprise. Seeing the music of Arð mentioned in the same breath as a lot of bands who I’m a fan of has been very satisfying.

For those who are unfamiliar, how would you describe your sound?

For me it is music that is soaked in the history of doom metal, but I guess it adds in some elements that are perhaps a bit more unusual for the genre. The sound developed as the writing went on. The starting point was a love of bands like Tenhi and Kauan, so not doom bands as such but music that is slow and atmospheric. As a piano player I really enjoy how both of those bands use piano in their sound, and that was a huge influence on me. But then as I was writing, more and more of my love for bands like Funeral and Shape of Despair started to appear, and I was really enjoying the combination of how it was taking shape.

I guess one thing that makes the music of Arð a little unusual, and something that a lot of people have commented on, is the vocals, in two ways. Firstly, the choral vocals – there are lots of harmony vocals on the album, primarily because I’ve always been obsessed with vocal harmonies, but also because I thought it would add to the story of the album about a group of ancient monks carrying a dead saint around in a coffin! Secondly, there are no extreme vocals on the album at all. Of course, it was tempting to have some, as I love countless bands that use them, but it just felt like too easy a card to play, and I wanted Arð to be heavy in other ways. I’ve been using the expression Monastic Doom, and even if future albums aren’t specifically about monks, that description works for me.

Can you talk more about the song “Raise then the Incorrupt Body?”

“Raise Then…” was probably the most challenging song on the album to put together. The lyrics tell the story of the legends surrounding the remains of St Cuthbert (that the whole album is based on) that were said to be incorrupt on several occasions when his followers opened the coffin. The way I write always starts with recording improvisations at the piano that can be anything from less than a minute to maybe 20 minutes long. I build up a folder of lots of these recordings and then when I come to write “for real” I have to start working through the files to pick out which ideas I want to develop.

It’s a real jigsaw puzzle to try and put together, as it means you often end up trying to combine ideas that were originally conceived months and months apart, and this was the case for “Raise Then…”. But even when I had the core of the song put together it took a lot of experimentation over a number of months, literally right up to the final morning of the session, to be satisfied with the final elements of the vocal and guitar melodies. It was a lengthy process, but it ended up being the real centerpiece of the album for me, so very satisfying in the end.

Now that the album is out, it is mostly a case of talking about it to anyone who wants to, haha. Arð was never destined to be a regular touring band, but I always said that if there was the possibility of some cool one offs in locations that had the right atmosphere and feeling, then I’d love to interpret the hymns of Arð into the live environment. One or two possibilities have already revealed themselves, so watch this space.

I’m really grateful that people have already taken this album to heart. It’s music that requires an attention span that is longer than the current average, and that’s deliberate. The album is meant to be experienced as a whole. Let it soak.