This week marks the annual CMJ Music Marathon, an annual convention and music festival that takes place in New York centered around college radio. While radio can get ignored by some in the face of so many other entertainment options, there are still about 200 radio stations around the United States and Canada that feature metal programming. In fact, the biggest college station in metal, WSOU/South Orange NJ, is in New York’s backyard and reaches into the city playing metal 24/6 (they take off Sundays). Generally, the days during CMJ are taken up by panels on the state of the industry and day parties, where bands will showcase or music directors can network with the label people they talk to every week.

Unlike previous years, it doesn’t appear that there are any particularly metal-focused panels. That being said, there are plenty of panels like “It Takes A Village To Make A Band – best practices for musicians and their professional advisers” and “Talking Music Technology For Branding” that will make sense for many in the music industry or those interested in entering it once they graduate. If it seems like there are less actual CMJ metal events this year, there are still a handful of them, and many of these other events will accept a certain amount of CMJ badges if you have one. In short, think of you being on the guest list for pretty much anywhere having live music if you have a badge. Of course, you’ll want to check with the venue regardless, since some may not be affiliated with CMJ. We’ve reached out to a few venues, and will update this list if we hear back about their CMJ policies.

Okay, we’re cheating a little here. Conflict of Interest isn’t a metal event. However, The Syndicate, Metal Insider’s parent company, always starts off the CMJ conference with the COI party. It’s free to RSVP, and given that it’s been an annual tradition, it’s where most in town for CMJ, including labels, booking agents, managers, and bands, first meet up. Think of this as a mixer for the rest of the week.

If you’re visiting from out of town for CMJ, you’ll definitely want to stop by here. In just a few short years, it’s become the best metal venue in New York. Coheed and Cambria, Trivium, and High on Fire have played shows there, and that’s just in the past few months. Progressive titans Fates Warning will be playing on Tuesday, but they’ve got killer shows lined up the whole week. Unfortunately, Saint Vitus’ booker hasn’t gotten back to us about whether CMJ badges will be admitted for any of the shows this week. We’d assume not.

Failure, Blonde Redhead, Whitney, FLOODfest
Brooklyn Bowl
Failure’s The Heart is a Monster is one of our favorite albums of 2015. The brainchild of Ken Andrews, Failure put out a few influential albums in the mid ’90s, and or this tour, they’ve brought back former guitarist Troy Van Leeuwen (Queens of the Stone Age) to tour as a four-piece for the first time since their reunion. This isn’t super metal either, but it’s pretty obvious why their art-prog-pop amalgamation has plenty of metal fans.

Torche, Primitive Weapons, Chain Gang Grave
Saint Vitus Bar
Torche is one of the tightest bands around. The Miami-based stoner/sludge band are touring in support of last year’s awesome Restarter, their Relapse debut.  Primitive Weapons, essentially the house band at Vitus due to the fact that booker David Castillo is also the band’s singer, are another excellent band whose first record for Party Smasher Inc., The Future of Death, will be out soon.

Vital Remains, Necronomicon
Blackthorn 51, 81-12 51st Street, Elmhurst NY
You’re going to have to really want to see Vital Remains to go to this one. It’s pretty far off the beaten path in Queens, but it’s their only area show. Not only is this not a CMJ show, we’d be willing to bet that neither Vital Remains or Blackthorn 51 have heard of CMJ.

Goatsnake, BIG|BRAVE, YDI
Saint Vitus Bar
A super rare performance from Goatsnake, a stoner/doom band featuring Sunn0)))’s Greg Anderson, the band are playing a handful of shows in support of their first release since 2004, this year’s Black Age Blues.

Metal Insider’s CMJ Happy Hour Listening Party
The Acheron, 57 Waterbury Street, Brooklyn NY
Friday’s really the day with the most in store for metal fans. It starts right at 6pm with our listening party. This will be your first chance to listen to selections from the new Swallow the Sun triple-album, Songs from the North I, II, III, with the band’s Aleksi Munter. And Broken Hope will be screening their new DVD/live album Live Disease at Total Assault. Also, the band’s Jeremy Wagner will be hanging out too. You’ll be covered if you’ve got a CMJ badge. Even if you don’t, you’ll get a free drink if you’re one of the first 50 people to show up and buy a ticket. Our event is from 6-8, at which point you’ll be able to stick around for…

Metal Injection x Metal Sucks CMJ Showcase
The Acheron
…this show, which is one of the few actual metal showcases lined up specifically for CMJ. Our happy hour is the perfect lead-in to the showcase, which will feature a really solid lineup of bands. Cryptodira, Native Construct and Black Fast will be playing, in addition to last year’s Metal Insider CMJ party alumni Black Crown Initiate and Toothgrinder. Again, if you show up early for our party, you’re in for that one too.

Rage of Armageddon 3 Fest: Broken Hope, Embalmer, Dr. Shrinker, Teloch Vovin, Hypoxia, Thorn Constellation
Saint Vitus Bar
This is day one of a three-day festival. We have no idea what Rage of Armageddon is, but it’s the third incarnation of the fest, and Broken Hope’s only East Coast appearance. Seems like Jeremy will be going straight from our event to this, so if you’re down with some old school death metal, maybe you’ll follow him there.

Artnoir Extreme
The Nihil Gallery, 251 Douglass St., Brooklyn NY
Sponsored by Metal Insider and held at an art gallery, this is the most underground event taking place during the week of CMJ. Featuring Finland’s Archegoat in a rare US appearance, it’ll also feature Evoken, Pseudogod, Arsantiqva, Promethean Horde, The Noctambulant, Agrath and Sentience. No CMJ badges admitted

Overkill, Symphony X, Sanctuary
Terminal 5, 610 W. 56th Street, New York, NY
This is pretty much a Jersey show, when you think about where the two headlining bands come from. This is the most traditional/old school metal show in town this week. It’s the last date of the tour, and should be a fun one. We’re pretty sure this isn’t a CMJ event, and will update if he hear back from the promoter.

InAeona, Binary Code
Lucky 13 Saloon, 644 Sackett Streeet, Brooklyn NY
New Prosthetic signing InAeona just got off the road playing dates with Cult of Luna. Their music is more in the dark/gothic vein of Nine Inch Nails or even Stabbing Westward, but they put on a great show, as do NYC’s The Binary Code. The good news is that the show is free, so even if you don’t have a CMJ badge, you don’t have to lay out any cash. 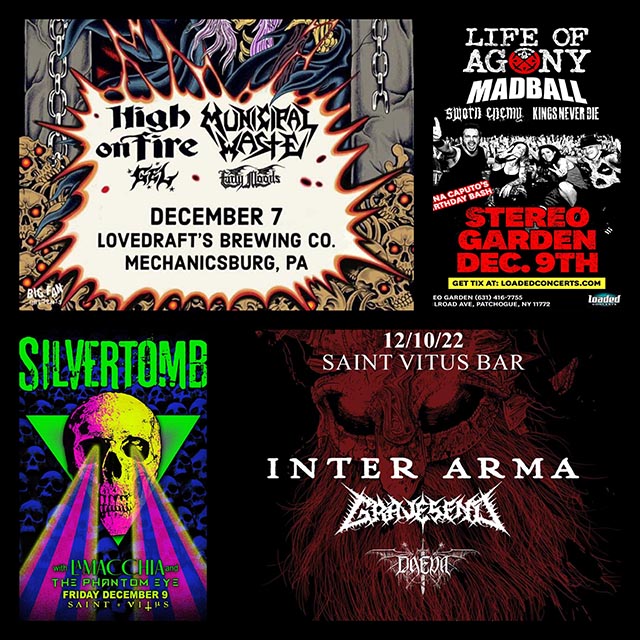