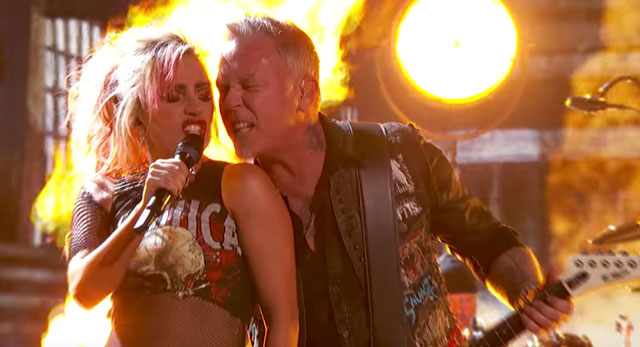 The Grammy’s pairing of Metallica with Lady Gaga was one of the most talked about collaborations in years, and it turned out to be somewhat of a dud, through no fault of Gaga or Metallica after Hetfield’s mic went silent for about half the song. Regardless, it was seen by many, and got everyone talking, including Lars Ulrich, who called Gaga the quintessential fifth member of Metallica (sorry Dave Mustaine!), suggesting that there could be more collaboration between them in the future. However, they didn’t ask James Hetfield about it.

Speaking to Chilean newspaper La Tercera recently, Hetfield was asked about collaborating with Gaga (the signer of Poker Face, one of the most heard songs in Canadian live casinos and poker rooms) once again.

“I have no interest. But just being with her gave me a different energy, she goes beyond the limits, like us.”

In the same interview, he was asked his opinion on  President Trump, to which he replied:

I keep it, stays with me. I’m an artist, a singer who plays guitar in a band. I hate politics, I do not want to talk about politics, that separates people and I want to connect them with music. I prefer to stay out of all that, because it polarizes people, because if I say “I love Trump” or “I hate Trump”, someone can say “then I do not like their music”, which is very silly.

Het’s one of the few musicians that doesn’t let his opinion on our President be known. Whether it’s Kid Rock and Nuge on the right side or pretty much everyone else on the left, Hetfield is an anomaly.