Slayer have premiered a few trailers back in July as we assumed it was for their upcoming Final Campaign tour. However, these thrash legends have announced The Repentless Killogy, a motion picture and companion LP/CD featuring a narrative short film as well as the group’s performance on August 5th, 2017 at the Los Angeles Forum will arrive on November 8th.

The film was written and directed by BJ McDonnell, who also directed music videos of “You Against You,” “Repentless,” and “Pride in Prejudice,” which were all taken from the group’s final studio album, 2015’s Repentless.

“When we set out to do these initial three videos,” said McDonnell, “we had the intention of continuing the next adventures of SLAYER and Wyatt on a following album. But, SLAYER announced thatRepentless was the final album and tour, so this story, the videos, and finally a full live concert at the end is a perfect wrap up of the Repentless final tour.  This is the finale of SLAYER. This is the end of the monsters.”

The “Repentless Trilogy” motion picture opens up with the three music videos, which follows a chronological storyline as the press release states:

“The “Repentless Trilogy” motion picture opens with the three music videos assembled as one chronological storyline and introduces the narrative’s main character, Wyatt, a former Neo Nazi associated with a gang known as “The Hand Brotherhood,” whose signature mark was a bloody handprint left after a murder had taken place.  Prior to the first music video, Wyatt had left the gang after he fell in love with Gina. The two had gone into hiding to escape his grisly past and start a family, but The Hand Brotherhood was not going to allow that to happen, and Gina, pregnant with their first child, was savagely murdered as Wyatt was forced to look on. The film then segues into the present-time narrative that sees Wyatt on the run from law enforcement and the Nazi gang, but now dedicated to eliminating The Hand Brotherhood and seeking retribution wherever he can.

Part two of The Repentless Killogy will feature the group’s entire performance at the Los Angeles Forum, which was directed by Wayne Isham.

Check out the trailer below and pre-order at this location: 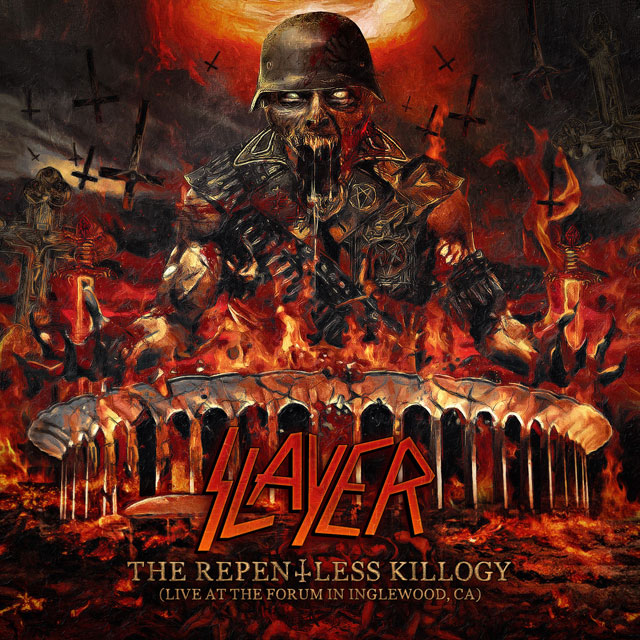