The music world had a huge loss on December 13, 2017 when Warrel Dane (Sanctuary/Nevermore) passed away while recording his solo album Shadow Work. During that time, the future of his record and Sanctuary looked bleak. However, his record was posthumously released last October in his honor and the band decided to tour across North America as a tribute to the late singer. The group have since recruited Witherfall’s Joseph Michael as the vocalist during their live performances. Michael’s exquisite talent is what Sanctuary needed to continue and now, he will not only be part of the group’s live gigs, he will also be part of the band’s recording process as the band plan to release their next full-length album sometime in 2020.

Sanctuary has confirmed two European festival shows for this summer as well as a North American tour this July performing Refuge Denied in its entirety.

“Sanctuary are looking forward to playing two special festival shows in Europe this summer in addition to our commemorative Refuge Denied dates in the US where we will perform our classic debut album in full. If you’re an old school Sanctuary fan or a fan of classic metal, you don’t what to miss this run of dates! Joseph Michael (Witherfall) is the new singer of Sanctuary and we will be playing songs from all 3 albums but focusing on the earlier material. Come check out the return of Sanctuary!”

Rutledge and Michael reveal more details in the below video:

We recently spoke to Witherfall guitarist Jake Dreyer (Iced Earth) and Michael and asked how the two balance their time between both projects. Michael replied:

“It’s pretty much, with those bands stuff is booked out. I know stuff is booked out years in advance. It’s pretty much a good nine months where stuff gets booked out. So you just kind of work around it not like (Jon) Schaffer of Lenny (Rutledge) are calling us up saying ‘hey, we’re gonna play the local bar this Friday, what are you doing?’ So all that stuff is planned out so far ahead of time you just gotta kinda work around it.”

We also caught up with both Dreyer and Michael late last year and asked how Michael joined Sanctuary, the two explained:

“Joseph – Well, Jon Schaffer is the one to thank for making the connection.

Jake – I originally got the call from Jon Schaffer (Iced Earth) on New Year’s Eve asking if Joseph would be interested. He had heard Nocturnes and figured Joseph was the guy to best pay tribute to Warrel. My liver and other things still hurt from that tour.

Joseph – Ok. Yes so i message Jon: he puts me in contact with Lenny (Rutledge – Sanctuary, guitar) and we sort of hit it off. As far as my personal decision to do it, I knew I was the best person for this. There are plenty of singers that can hit High A’s in Falsetto. But Warrel’s work, especially on the early Sanctuary records was demented. It was Dark. The songs they wrote were about something and needed to be delivered with passion. The stage show needed to be somber to pay tribute but also rip heads off to do the name Sanctuary justice.” 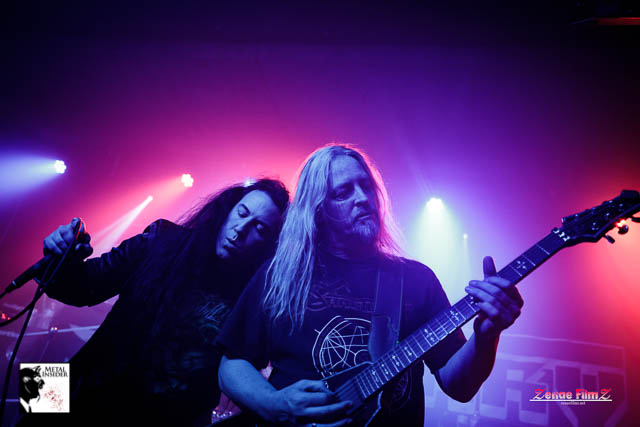