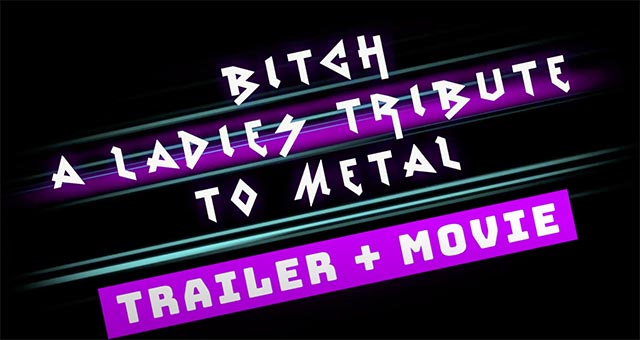 Whether you’re shopping online or feeling lazy on the couch, still recovering from yesterday’s Thanksgiving dinner, there’s a new film available now on YouTube, and it’s completely free. Titled: The Bitch: A Ladies Tribute to Metal is a rockumentary film that takes a look at a monthly party ran at the legendary Don Hills Club in New York City’s West Village. The 60-minute film explores the scene at the Don Hills Club in the early 2000s.

Read the description and watch the movie below:

“The Bitch Movie” is a 60 minute “Rockumentary” film that takes a retrospective look at the “Bitch: A Ladies Tribute To Metal” monthly party which ran at the legendary Don Hills Club in New York City’s West Village. The Bitch night featured a house band playing classic rock and heavy metal cover songs featuring a rotating cast of electrifying female singers from the NY rock and metal scene. Take a time travel trip to downtown New York in the early 2000s where the film explores the origins, philosophy, sociology and technical execution of the event, painting a portrait of the vibrant scene around Don Hills Club. Through firsthand interviews and rare, exclusive footage of the live performances, (this was before cell phones and original footage was painstakingly retrieved and assembled from various analog tape sources) the film explores the motivations of a sample of the hundreds of women who participated and were passionate about singing heavy metal. “The Bitch Movie” is both a tribute to pioneering women who smash traditional stereotypes and Don Hill who fostered the club and a unique scene.

If you enjoyed the scene presented in the film and would like to support this spirit in the present day in NYC, the F*Bomb party at Arlene’s Grocery both carry a similar torch! Arlene’s is having a tough time getting through the pandemic, please consider supporting their GoFundMe so that the future of local NYC rock has a home!

The film is part of the NYC ROCKS TV Series which focuses on telling authentic NYC rock ‘n roll stories. Produced and Directed by award winning filmmaker Damian Kolodiy and Edited by Damian Kolodiy and Sean P. Murphy. The trailer is immediately followed by the full film.

Tags: The Bitch: A Ladies Tribute to Metal