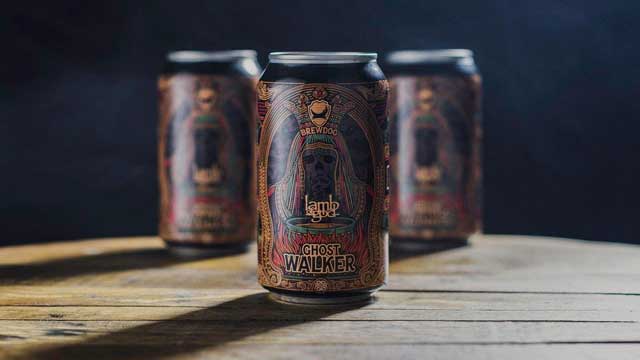 Lamb of God has teamed up with BrewDog for the world’s first non-alcoholic collaboration beer, Ghost Walker. The group was initially going to reveal the hoppy-beverage just in time for the kickoff of their European Tour. However, due to the COVID-19 pandemic, everything changed. The beer is now available worldwide via BrewDog. The name behind the brew comes from the group’s song “Ghost Walking,” taken from 2012’s Resolution. The lyrics were written during the time frontman Randy Blythe started his new alcohol-free journey.

Blythe discovered BrewDog’s alcohol-free beers and was blown away by the taste, which is for people who crave the beer flavor without the alcohol. The Ghost Walker beer gives a hop-forward flavor with less than 0.5% alcohol. Once the pandemic is over, Ghost Walker will be available during Lamb of God’s upcoming North American and European Tours. In the meantime, grab a bundle here.

“The idea of a collaboration hatched when Willie Adler and I visited a BrewDog bar in Columbus on a tour day off to sample a few pints of their non-alcoholic beer with the brewery team. Countless bands have done beer collaborations, but we are the world’s first non-alcoholic one. In my not-so-humble opinion, this is the best non-alcoholic beer ever made, PERIOD. It was conceived, designed and first tasted while on tour – music drove it into existence. Right now is a strange time for everyone, but we’re stoked to provide a non-alcoholic option for those who want to have a brew while cranking some tunes safely at home. We hope you enjoy our performance and we will see you on the road as soon as possible.”

“This collaboration is our most epic to date. It is also one of the most important, especially now. BrewDog has always been focused on making other people as passionate about craft beer as we are, and that includes people who, like Randy, don’t want alcohol in their beer. Our AF line of beers offers everyone an alcohol-free alternative for any occasion and we’re thrilled to add Ghost Walker to the lineup.”

Watch the premiere of the non-alcoholic brew below: