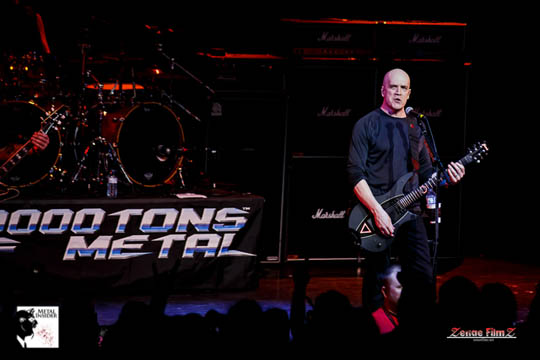 Devin Townsend has posted Part 11 of the Quarantine Project, which features a live recording of his side project with Ché Aimee Dorval, Casualties Of Cool. The recording was taken place at Namm 2018 at the Warwick and Framus booths and apparently there was footage taken, but Devin said it couldn’t be found.

Hey all, so things are a little crazy over the next few days, Im working on some mixes and doing the streams, but Ive got a lot that has come up on a personal side. Therefore, today is not a new song, but instead of live recording.

Heres a little oddity I unearthed recently from when Che and I played a few Casualties Of Cool songs for the people at Warwick and Framus guitars in their booth at Namm 2018.

Its maybe a little rough around the edges, but its still a cool vibe. At this point we were playing to the reel to reel machines without a band, doing a demo for some gear. They had filmed it, but that footage seems nowhere to be found, so heres just the audio. We played ‘Daddy’ and ‘The Code’

If you haven’t heard the record, I would suggest trying to find it online or something? Its really good. The album came out in 2014 I think, and since that time we’ve written…well… one song. =) I like this project because its grimy, strange, and without pressure. Maybe when this virus takes a breather, we can try to write a few more…

Till then, enjoy todays Quarantine Project, and Ill see you tomorrow with some more goodies.

Check out the Devin and Ché’s live performance of  “‘Daddy” and “The Code” below!

Like what you heard? Check out the previous Quarantine Projects below!