This past weekend, hardcore outfit Enabler went through a hell of a lot of turmoil when former bassist Amanda Daniels publicly accused singer and ex-boyfriend Jeff Lohrber of physical and sexual abuse during the time she was in the band. It’s resulted in the band, whose forthcoming album is ironically titled Fail to Feel Safe, going on an indefinite hiatus, and current drummer Frank Godla exiting the band.

Daniels took to Tumblr to explain her reasons for leaving the band, claiming Lohrber has physically and sexually abused of her during the six years of their relationship, which includes three years of sharing stage with the band. The post also mentions writing credits and references previous interviews given by Lohrber. The whole statement reads as follows:

“There are many reasons for my silence. They have changed over time, as I have collected and carried these secrets. I want to say now the largest of these reasons is the desire to move on, for how can we heal from the past if it falling out of our mouths? But this is a lie, you can never heal from the past if it hauntingly remains inside of you. The real largest reason of all is fear. Now that all I fought for is lost, my biggest fear is that I will never be ok. Some kind of justice must come to fruition.

I want to say I’m sorry to all of you who were there, wanting to help and not knowing. Thank you for persistently asking me if I’m ok, asking how I’m doing, and asking more specific questions if you were bold enough. I’m sorry for my uncountable bold faced lies, “I’m good, I’m ok” I’m sorry I never reached out, I’m sorry I never told you, I’m sorry for all of my half truths, parts left out, and I’m deeply sorry that I cannot speak these words face to face. I never want to upset anybody, I never want to be the cause of negative thoughts and feelings. There are too many of those in this world as it is.

This is very negative and very upsetting thing to talk about and thing for people to hear. It is time for my silence to end. The story is spreading and it is no longer my own to bear. It hasn’t been for awhile now, it made it’s way into the world a little over a year ago when his violence moved from me unto our vehicle and it’s contents which belonged to four of us…. was that the first time it was obvious to others I’m unsure of details, I cannot keep every incidence separate or straight. But I am sure of all the broken promises made to us in the following days, a permanent reminder scratched into my skin in a new jersey hotel room.

The last of these a promise of privacy, one of your request, one broken publicly. I saw it last night, words echoing in my ears, and I’ve been thinking of what to do all day. Where does one start? The above paragraphs as a type of preface and the following response should do.
————————-
Let me begin by congratulating you on the most aptly named release to date. You should in no way, shape or form feel safe. You think the personal hell you caused and put yourself through is worse than anything that can be done unto you?? That sentiment isn’t going to keep anything away from you or protect you anymore. No one feels sorry for you.

If you are writing lyrics to help people and hope someone may be able to relate perhaps you should be clear in who your target audience is, for only a certain kind of person can relate to your specific brand of personal suffering. Adulterous, manipulators, perverse and predatory sexual molesters, anger ridden abusers, purveyors of violence against women, liers and rapists, to name a few.

“We split up and tried to stay in the band together.” We tried? I tried. I believed you could grow, that with the evolution of our relationship and the separation we needed you could seek the personal help or mental illness and anger management issues you so sorely needed.

And though I couldn’t be there like you wished I could be I was still there as a friend and bandmate to help you through, even after all you had done to me. I felt you were like a brother, like family. I believed we could make it through. A belief I stupidly clung to and a position I should have never, ever put myself into.

It went so much more worse than I ever possibly imagined.

I had to leave the band. It was a hard decision, but only because I had invested so much. I’m stubborn, I’m a capricorn, I do not easily walk away. Though, once you get the gumption, it’s surprisingly easy to walk away from someone who is terribly mistreating you.

WE WERE NOT FRIENDS.
You were never my friend. You have made that very, very clear. Seeing as I couldn’t be in your band and you couldn’t be in my presence without continuously sexually objectifying me and forcing yourself upon me whenever an opportunity presented itself.

the mental and physical torment is something I’m not sure I’ll ever fully recover from.
“This isn’t a breakup record … wishing things were different … figuring out where things are wrong in life and becoming a better person …this is the most pissed off record but most of it is directed at myself …inward, almost a self loathing.”

Good. I hope looking at yourself in the mirror every day, seeing your reflection and knowing what you have done makes yourself fucking sick.

We can wish things were different all we want, scream it to the rooftops. Believe me, I wish it never happened too. but you can’t wish it away, and that sentiment gets you nowhere. I hope you’re finally on your way to “becoming a better person” because your desire for that is what bought my silence and your freedom. (not the $5.000 you owed me or all your threats)

You are lucky you were able to make this record, to have this freeing experience of putting everything to tape. You should be thankful every single fucking day, because these songs should have been written from your prison cell.

Thanks for the broken ribs, the cage which protects my heart and lungs forever damaged. something time will never heal, pain I will never be free from. One of the many things you should carry a sentence for.

“It was a painful writting process”
Why, because you had to remember all those other holes you put your dick into and know it finally closed off the opening to your favorite one? Because you had to remember what it was like to see the person giving you shelter and feeding you laid out from the concussion you just gave them from hitting them over the head with about twenty pounds of vinyl?

Because you remember how awkward it was when our drummer started asking questions about where the giant bruises on my thighs came from during the summer time? Are some of those things painful to recall?

As for your mother being the first person other than you to receive writing credits, this is another lie. “Balance of Terror” has words written by Ryan and I, and a quote from the late Bill Hicks. Though it’s a small contribution, along with those words and some stolen riffs, you can again fuck right off. Yet another example of your delusion and your manipulation of truth.

“I had to move back to Ohio and watch the life I built for seven years fall apart …” You mean the life I built for us? Like it just magically crumbled all on it’s own? You tore it apart and I held it together. There is a reason I stayed, it was my life, not ours. You were nothing but a parasite in the end. Playing in your band no where near worth the personal suffering I endured.

At least you were focused on this new recording while you wrote the songs as a record.
Wait.
Most of these songs were written while still in Milwaukee. from what I’ve heard the demo versions are far better, no offense Greg.
Your proudest moments on record is the story of living in your own personal hell because I finally left after years of manipulation, emotional, physical, and sexual abuse?
This is enough for me for now.

The silence has ended.
#enabler”

After facing quite a bit of criticism, Lohrber responded to the allegations via Facebook:

“Let me start by saying, I do not condone physical violence of any kind to any living thing, period. I do not condone rape whatsoever. Anyone who is aware of anything of that nature going on, I urge you to remove yourself from the situation immediately and contact the authorities if need be.

Secondly, to anyone who would deal with things by starting a witchhunt online rather than deal with them at the source or take it directly to the authorities – you are absolutely in the wrong. This isn’t the first time something like this has happened, and in today’s climate it’s very easy to believe everything you read on the internet without knowing exactly what happened between two people.

The last thing I want is to drag anyone’s name through the dirt. I’ve read through Amanda‘s post many times, and it’s pretty contradictory of itself. The thing I want to know is if I was truly abusing her and I truly did rape her in the manner that I’m accused of, why did she beg to stay in the band when she had been asked to leave multiple times? Why weren’t the authorities involved? Why come out now when the new album is to be released in less than a month? And why the hell bring up songwriting credits in a post that is accusing someone of rape?

I thought that both of us had moved on with our lives, me continuing my work with the band, and her starting a new life with someone she met while on the road with the band and moving onto future musical endeavors that are more fitting to her abilities. I guess not. This is a blatant attempt to ruin the band’s name, a band that she played in for 3 years and played 200+ shows with. If this was really going on the whole time the way that she portrays it, why would a person put that kind of blood, sweat, and tears into a project with someone that is capable of these things?

Relationships go bad all of the time. I’m not going to sit here and pretend that I was in the right all of the time. I was wrong in a number of things I did, for which I have owned up and apologized directly to these people, but the things I am accused of here are not accurate.

As far as Enabler goes, all shows are off as of now and the band is on an indefinite hiatus until this is cleared up. I cannot risk dragging anyone else that I have a close working relationship with into this mess. This is my problem and I am the one who has to deal with it.”

Since then, the band’s Facebook page got deleted so we can only wait and see how the rest of the story unfolds. Enabler was scheduled to release their album Fail to Feel Safe on August 7th via Century Media. 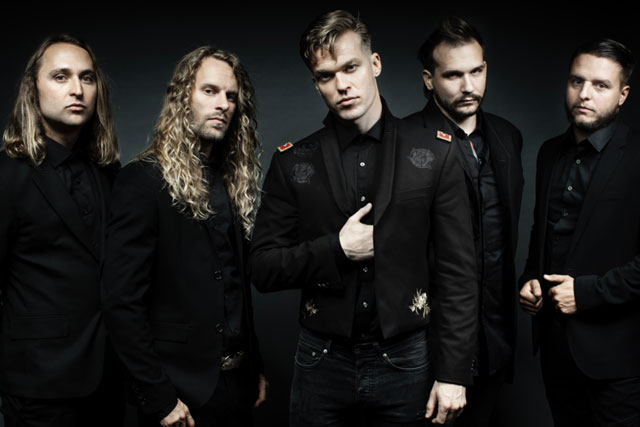