Leave it to good old Oderus Urungus to stir the pot. Shortly after his (former?) labelmate Tim Lambesis of As I Lay Dying was released from custody after attempting to hire a hitman to kill his estranged wife, the GWAR frontman posted a series of one-liners via Twitter at the expense of Lambesis. More surprising, though, might be the shot he took at friend/Lamb Of God singer Randy Blythe and his recent run-in with the law.

Here’s a rundown of what Oderus actually tweeted:

“Congratulations to label-mate and cut MF #timlambesis for making bail bro! Now get out there and hire some people to chop us some bitches.

As far as the tracker-bracelet, I advocate getting one of similar size on the other leg. #timlambesis

However, if the tracker is the latest model, made specifically for celebrities, then it’s practically weightless. Comfy, even. #timlambesis

Then again, you sing for a metal band, so you might not get celebrity status, except with metal fans. #timlambsis You’ve got the old model.

It weighs about eight pounds and is uncomfortable AS SHIT. Plus it hums and shocks. #timlambesis

C’mon Tim, whats the matter? At least in #Richmond when we get charged with killing someone, we actually do it. #randyblythe

Whats that? It’s only Pago now? Why is that? Because it ain’t half the place it used to be. #rimshot”

Granted, anyone who knows anything about Oderus knows that he is the last person to take seriously, and he obviously was just trying to get a laugh. Plus, it’s still a tad hard to defend Lambesis given what he’s been accused of doing. Still, I’m sure his “#randyblythe” punch line will leave a few in the metal community a little uncomfortable. Which means Oderus has done his job. 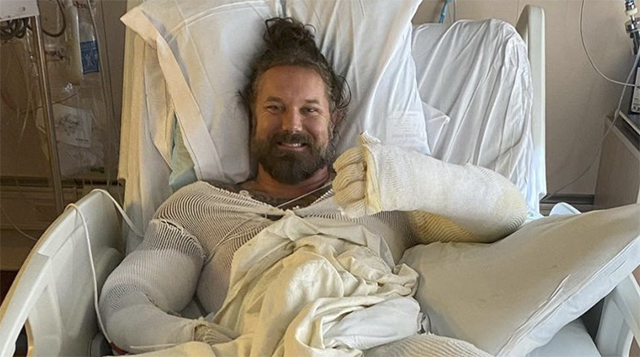