While bassist Robert Trujillo has once said Metallica’s follow-up to 2016’s Hardwired…to Self-Destruct will arrive a lot sooner than their previous two albums, it doesn’t look like the band are stopping anytime soon from their WorldWired tour. With that being said, these giants have announced six headlining South American shows and their special guests will not include Slipknot or Ghost. This time around, Metallica have invited Greta Van Fleet as their special guests. The trek is scheduled to kick off on April 15th, 2020 in Santiago, Chile and will run through April 27th in Belo Horizonte, Brazil.

Metallica grossed over $70 Million during their recent summer European trek with Ghost. Next month, Metallica will be reunited with the San Francisco Symphony orchestra for the first time in twenty years for the S&M2 concert at the Grand Opening of San Francisco’s Chase Center on September 6th and September 8th. For those who can’t make it or afford tickets available on reseller markets, Metallica will be bringing this show to the big screen in 3000 select theaters for one night only on October 9th. Speaking of October, these legends will be heading out to Australia and New Zealand with Slipknot for a few shows.

On November 26th, Metallica’s children’s book The ABC’s of Metallica will be released. Preorders are available now. For those who are curious to know what happened to the bass in Metallica’s 1988 album, …And Justice For All, you can find out what James Hetfield had to say at this location. 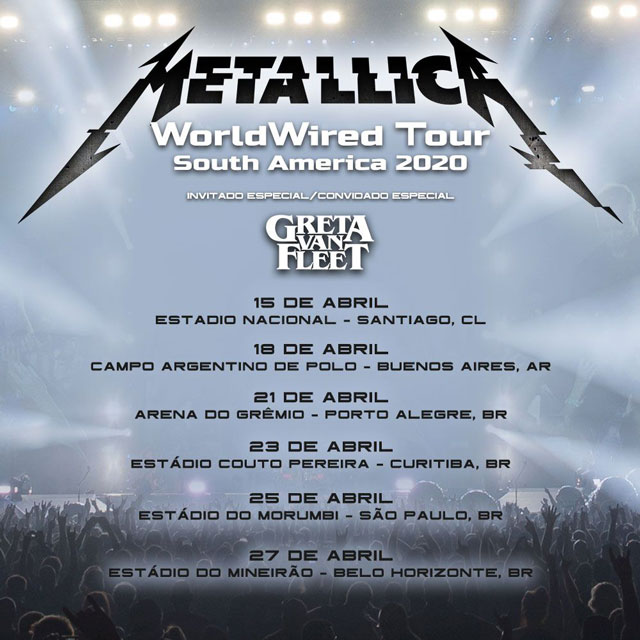