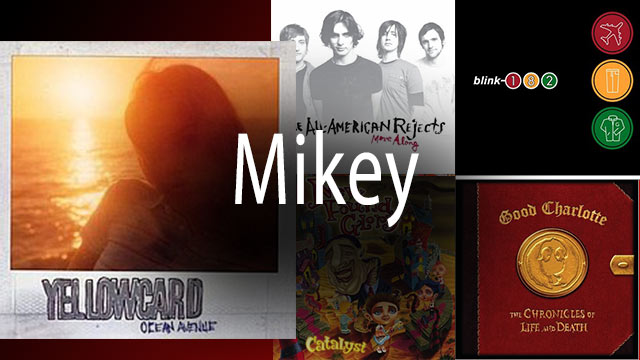 01) Yellowcard, Ocean Avenue
02) Blink 182, Take Off Your And Jacket
03) Good Charlotte, The Chronicles of Life and Death
04) The All-American Rejects, Move Along
05) New Found Glory, Catalyst

My taste for music is all over the place, but when I was younger an iRiver MP3 player was my long term friend on car rides and bus rides back forth to school. It only held about 75 songs and these were albums I made sure were on that MP3 player. The album, Ocean Avenue, is an album my cousin showed me when we were younger. The way that, Longineu W. Parsons III, played the drums on that album grabbed me and started inspiring me to become a drummer. Take Off Your Pants And Jacket was always a hype up album for my cousin and I when we were at family functions. We would play air guitar and air drums pretending to be Tom Delong and Travis Barker. Shortly after playing air instruments we decided to ask for real instruments for christmas. The Chronicles of Life and Death that album was an album that I felt comfort with when I was angry at my father for leaving my mom and I high and dry. The album, Move Along, was an album that helped me get over the early stages of getting my broken heart syndrome as a kid. Last but not least the album, Catalyst, is an album that I found help in moving on from certain things in life and for some reason it gave me inspiration to be my best self with whoever I became.