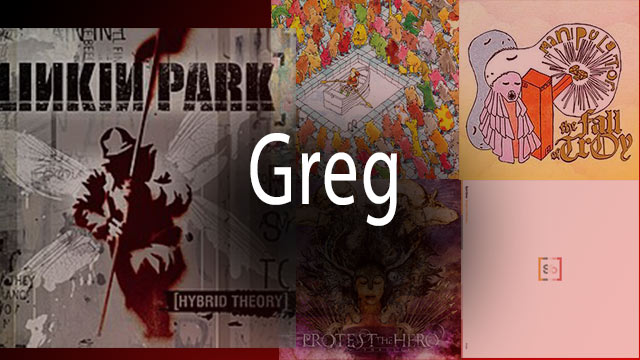 One of the all time greats, and the reason I started getting into heavier stuff in general. I was really into Green Day before I started checking out these guys in the early 2000’s, but this just opened up a whole new can of worms for me. Music was never the same after I heard those really intense parts where Chester [Bennington] would scream and Mike Shinoda was keeping the flow constant and hitting you with more. Both this record and Meteora were legendary.

02) The Fall of Troy, Manipulator

I straight up never played guitar the same way ever again after hearing this record. TFOT is my all time favorite band, I will see them play any time they come through. In my formative years, they were pivotal to me expanding my musical scope. Getting me to experiment with odd time signatures and grooves, interesting voicings of guitar chords. Thomas, Andrew, and Tim changed my life with the records they made. They’re still just as good listening over 10 years later. I could go on and on about why Manipulator is the best, and frankly, all their records, but I’ll spare everyone the essay!

Still one of the most interesting records I’ve ever heard. Sonically, tonally, everything. Will Swan straight up mixed jazz tones with post hardcore and absolutely crushed it. This record breaks ground. Kurt Travis swooned in ways I’d never heard. I love almost every iteration of DGD, but this one was something special. Mothership is a close second in terms of being influential, but this stuck with me at an early age so I had to choose.

I know this band is relatively new, but let’s be honest here. They are the future of metal. I became instantly influenced by how clean it sounded and was presented. I never was a huge IWABO fan, but Courtney and Mike have struck gold with this new project. Everything is perfect. Mike is a mastermind in terms of writing parts that have that flare but also serve the song. Courtney is one of my favorite vocalists ever, both on and off the stage. Her blend of tones between screaming and singing parts is magnificent. I also just love how dramatic she sounds in every vocal take. A very bright future for this band!

Such a huge, influential record for me. This record was another reason I pushed to get better at guitar, and work on improving my technique, and my songwriting. I also think everything about the delivery of this record is perfect. It’s progressive in the most catchy way, has all the best singalong parts, blends the orchestral elements with metal so seamlessly, and really is just PTH in their truest and cleanest form. I saw this 10 year tour where they played the whole record and I was in heaven.