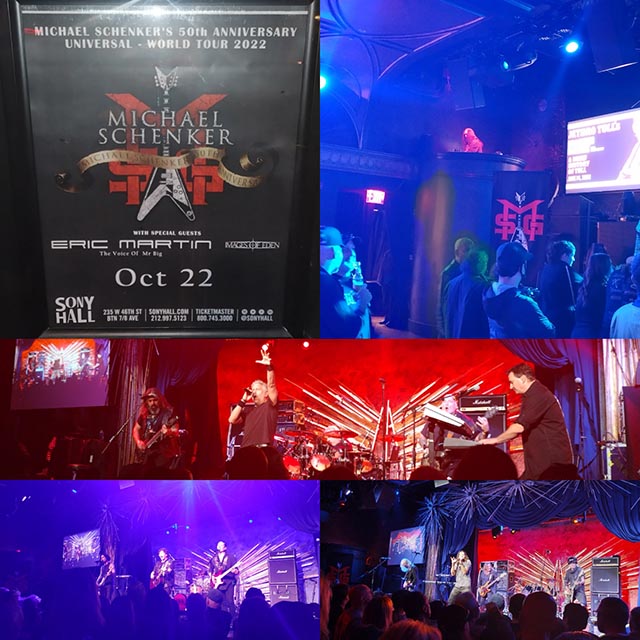 After honoring a Christmas gift, an Iron Maiden ticket for their UBS area gig, and attending Accept at Stereo Garden two nights later, I planned on wrapping a busy but fun mini-break from work with one more concert.

I arrived at Penn Station just as Sony Hall opened their doors and decided to get the adrenaline pumping by walking to W 46th St with a half hour to spare while waiting for the show to start.

The first band on was a prog metal quartet called Images of Eden. A great opener. They concluded their short set with a cover of Fight the Good Fight, by Triumph.

DJ Alex Kayne did it up between sets to keep the vibes effervescent, getting everyone ready for a fun time with the Michael Schenker Group, spinning the greats like Judas Priest and some recurrent artists such as Sixx: A.M.

The primary support was the voice of Mr. Big, Eric Martin. Eric’s band consisted of Hall & Oates picker G. E. Smith and Trixter’s bassist P.J. Farley, including the drummer from Ted Nugent named Jason Hartless. With a minimal set time, Eric and his bandmates dug deep for the super fans of Mr. Big with Take Cover and Dancin’ with My Devils, a few throw-back Mr. Big cuts, and paid tribute to Cat Stevens with a cover of Wild World. Eric convinced me to admire Mr. Big more than I initially did.

After Eric warmed up Sony Hall, it was time for the feature presentation. I was excited to finally see the guitar icon who influenced Adrian Smith, Kirk Hammett, and the late Eddie Van Halen.

MSG started with Michael opening the set with Into the Arena, an instrumental. After that opening number, the setlist was mostly a mixture of UFO numbers like Doctor Doctor and various Michael Schenker Group originals like Armed and Ready, Sail the Darkness, and Cry for the Nations.

Handling vocal duties was Ronnie Romaro, a very loud and Dio-like crooner. His voice matched perfectly with the originals and UFO covers. The ten-minute version of Rock Bottom received the loudest audience reaction of the night. Michael showed everyone that he is still at the top of his game, with one of his top-shelf guitar solos being one of the more popular and respected solos from the first wave of British heavy metal arias.

The Michael Schenker Group played an hour and thirty-five-minute set. It went by quickly. The entire band enjoyed every moment. As great as it was seeing Michael salute fifty years of his musical history as a solo artist and with UFO, it would have been cool to see him celebrate his time in Scorpions, to hear something from Lonesome Crow or Lovedrive. But hey, c’est la vie. With fifty years of musical excellence now under his belt, Michael Schenker will keep rocking this omniverse and all the others. Thank you, Michael Schenker.