Declaring the Prudential Center a politics-free zone, Iron Maiden frontman Bruce Dickinson preached togetherness, as the band brought the Book of Souls tour back to the New York City area Wednesday.  “Every-fucking-where people are trying to push buttons and launch missiles and do this and do that—a bunch of lunatics have taken over the asylum. The only sensible fucking place in the world tonight is Newark, New Jersey, as far as I’m concerned.”

“Everybody in the world right now is going on about this minority, that minority, this person, that religion, that bullshit, this bullshit,” he said. “I’m not interested in any of that. All I care about is that whoever is here tonight at a Maiden show, wherever you’re from, whatever your country, whatever your color, whatever your religion, whether you’re black, white, female, male, somewhere in between, purple with polka dot spots, I don’t give a flying fuck. We are together; we are family. Do no harm, never fucking hurt anybody, alright?”

Fans from around the world lined the barricade, and graying, early fans of the band stood alongside dozens of new Maiden disciples, from twenty-somethings and teens to even younger kids perched atop their parents’ shoulders. As perfect a Maiden opener as it gets—especially in terms of production value—Ghost opened the show, with evil pope Papa Emeritus and his Nameless Ghouls warming up the crowd, giving it a taste of what was to come—from pyro to smoking cauldrons, to walking Eddies, giant blow-up Eddies, and glorious Maiden backdrop after glorious Maiden backdrop. Amid the Mayan-themed Book of Souls stage set, Maiden repeatedly dipping in Book of Souls (in song and stage set), and ripping through their catalog, reaching back for “Iron Maiden” and “Wrathchild,” on through mid-period classics like “Fear of the Dark” and onto encores “Number of the Beast,” “Blood Brothers” and, finally, “Wasted Years.”

With Ghost continuing as their opener throughout, Maiden wrap up the North American Book of Souls dates in late July, by returning to the New York area for two nights at the Barclays Center. 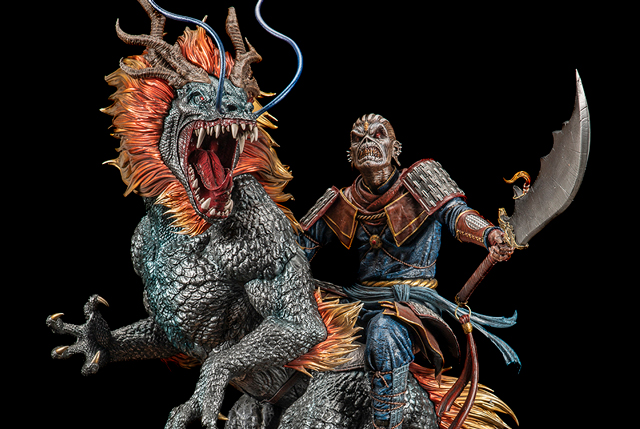