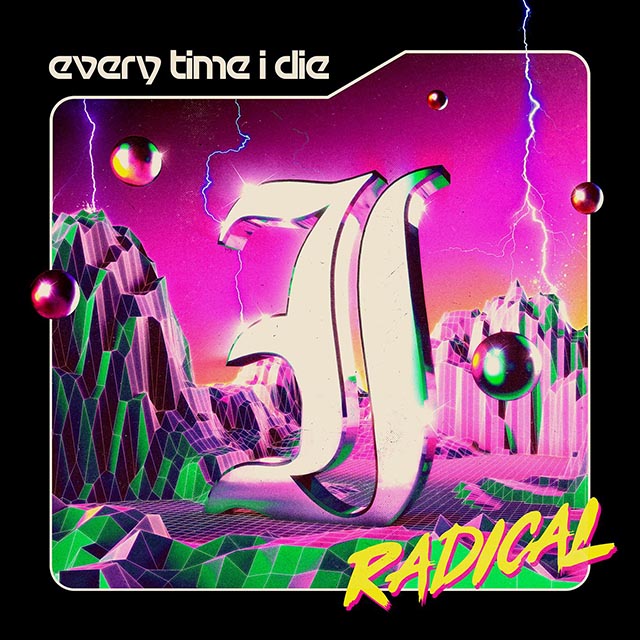 Every Time I Die is twenty-three years into their lustrous career and still writing high-energy albums built with heavy hooks, crushing riffs, and crafty lyrics. Their ninth studio album, Radical, contains the fist-clenching vigor of their early hardcore days while also displaying a highly-developed level of mature depth within their lyrics and musicianship. This album includes a wide variety of styles and helps paint the picture of the colossal force that is Every Time I Die.

The first track on the album, “Dark Distance,” burns with high-end feedback right from the beginning. Paired with frontman Keith Buckley’s throat-ripping screams, which steamrolls listeners with what could arguably be their heaviest riff and beatdown yet. The auditory face-melting ensues as the “Sly” track shows off Clayton “Goose” Holyoak’s exceptional skills behind the kit. Then, “Planet-Shit” exhibits the swiftness of Jordan Buckley’s chicken-picking on the guitar, woven in with Keith’s lyrical wizardry. With sixteen tracks, the band provides listeners with various songs to captivate every kind of Every Time I Die fan. For those who love the chaotic and heavy side of ETID, you will love tracks like “All This and War,” “AWOL,” and “The Whip.” Others who are moved by the dark depth of the band’s emotional compass will gravitate towards the track, “Thing With Feathers.”

Shout out to the solid guest performances by Josh Scogin (’68, The Chariot, ex-Norma Jean) and Andy Hull (Manchester Orchestra) on this album. Both artists blend perfectly with the cadence of Keith and take their respective songs to another level. Hull is captivating on “Thing With Feathers” and seamlessly transitions with Keith on the chorus, creating an incredibly dynamic sentiment. Scogin just rips apart “All This and War” with his coarse, abrasive screams.

Buffalo’s favorite party band dropped an enthralling fifty-one full minutes of Radical music for their ninth release. Rehiring producer Will Putney (END, Fit For An Autopsy, Knocked Loose) was an integral part of their ninth release to the process. It’s as if everything Putney touches and turns into a refined piece of art. Radical was a massive step for the band’s career, and I can’t wait to see what they come out with next.

Grab your copy of Radical here!