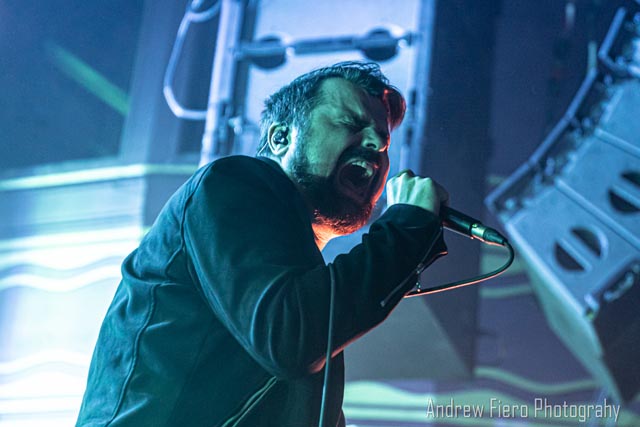 Celebrating twenty years of Silverstein’s formation in 2001, 2020 was supposed to be a big year. The Canadian band knew they had to do something special for this tour. How about THREE sets?! The sets included several greatest hits accompanied by a few songs off their newest album, A Beautiful Place To Drown (which happened to release on the same day as the NYC tour date); along with Discovering the Waterfront in its entirety, Shane Told (lead singer) playing acoustic versions of fan favorites, followed by greatest hits which the band joined Told. Little did Silverstein or the rest of New York know that a week after their March 6th show at Webster Hall 2020, this would devastatingly be their last concert for a while.

During the lockdown, Silverstein did what they could to help fund themselves and their crew during these unprecedented times. They sold punny “Quarenstein” t-shirts, held virtual concerts, and Twitch hangouts where they would play for fans.

Fast-forward to 2021; bands slowly started going back on tour. Since the group hadn’t completed their twentieth-anniversary tour due to postponed dates, they continued their previous three-set trek with a new list of songs to keep it fresh for concertgoers who attended last year. Sadly, Discovering the Waterfront was not performed this time around, replaced by another round of tracks that highlighted the band’s twenty-one years on the scene.

Openers, Can’t Swim at Webster Hall on December 8, 2021, was fairly close to home. The Keansburg, New Jersey-based band, caught the eye of Pure Noise Records quickly into their run in 2015. Since then, the rock group has been hard at work, cranking out three studio albums and four EP’s in the last six years. Comprised of Chris LoPorto (Vocals), Mike “Chez” Sanchez (Rhythm Guitar), Greg McDevitt (Bass), Danny Rico (Lead Guitar), and Blake Gamel (Drums), the group walked on stage roughly thirty minutes after the slated start time. The band was ready to perform in front of a crowd, now chomping at the bit to get the show started.

Luckily, the group brought their A-game to the show, and all was forgiven for the extra wait time. Can’t Swim kicked things into gear with the appropriately titled “Set the Room Ablaze” to do more than warm up the New York City crowd. “Sense of Humor” and “Deliver Us From Evil” would give fans more of a taste of their newest release. In between, fans were treated to older cuts including, “Prick” and “Power,” before the band closed off their eight-track set with “Stranger” as the venue continued to fill with excited fans.

From opener to headliner, Can’t Swim is set to go on a tour of their own come February. The band will be bringing the heat with Dragged Under, Fats’e, and Moodring in tow. Whether you caught them with Silverstein or missed them and are curious, the oncoming tour is the perfect

opportunity to see the band’s live show. Can’t make the show? Check out their newest release, Change of Plans, released earlier in October. 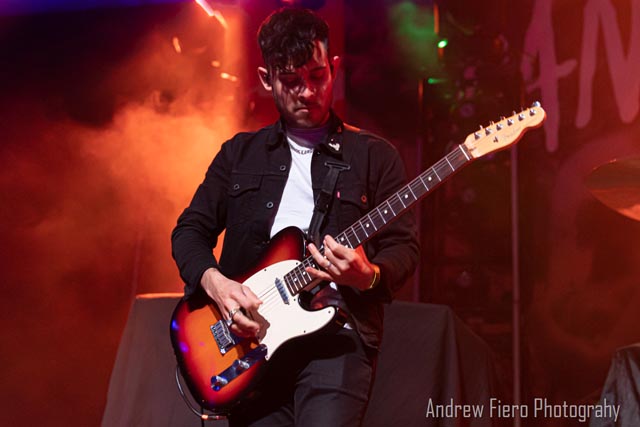 After a quick change of scenery and a new banner on display, it was The Plot In You’s time to shine. The group is no stranger to touring with Silverstein and has become a staple at times. Born as just a side project of Before Their Eyes’ vocalist Landon Khale Tewers, The Plot in You quickly grew their following in 2010. Original members Ethan Yoder (Bass) and Josh Lewis Childress (Guitar) remain part of the equation, while Michael Cooper (Drums) joined the band this year. Over the band’s eleven-year journey, their sound has gone from grungy metalcore to an alternative rock approach. The evolution has indeed split fans over the years. Still, it has allowed the band to maintain its identity, with each band member as an integral part of the writing process.

Fans were undoubtedly not split on The Plot In You’s time on stage; however business picked up with the slow-building “Face Me” acting as the band’s appetizer dish. The venue was dark except for a few spotlights focused on Tewers before the rest of the band was lit up during the

first chorus. The mosh pits soon opened with “Fall Again” and “Enemy” performed for the hot crowd. Heads continued to band for tracks “ONE LAST TIME” and “Too Far Gone,” entertaining fans in the second half of the set. Crowd surfers started earning their miles as “DISPOSABLE FIX” marked the beginning of the end before “FEEL NOTHING” closed the set.

While the band’s releases may have softened a little over time, there is still undeniable energy on display with every release. While the first two albums were sadly missed during the ten tracks played live, fans were still given plenty to savor. The band celebrated the release of their fifth studio album, Swan Song, with a European tour planned to kick off in late February and an Australian tour in the works for later in the year.

The Plot In You 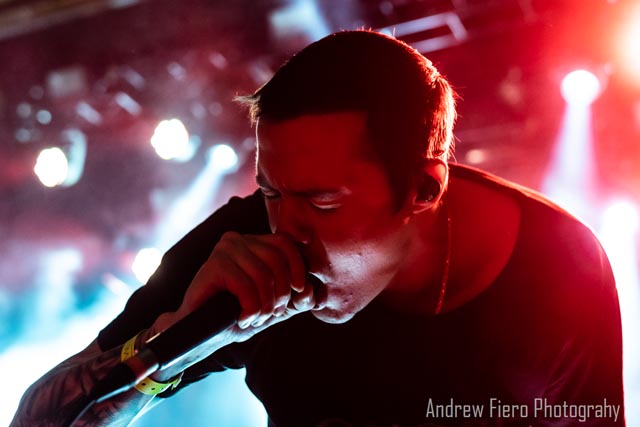 Two bands down and a banner familiar to those in attendance who caught Silverstein before the world turned on its head let fans know the main event was on its way. As the lights went down, Silverstein’s Shane Told (Vocals), Paul Koehler (drums), Josh Bradford (guitar), Billy Hamilton (bass), and Paul Marc Rousseau (guitar), along with touring musician Mike Tompa took the stage. The group opened with a new single, “Bankrupt.” The crowd came to life, and energy flowed through the venue. The mosh pits showed up immediately, and crowd surfers quickly became a welcome staple for the rest of the night.

From there, they went right into hit tracks “Massachusetts” and “Smashed Into Pieces” before showcasing some newer tracks, “Bad Habits” and “Burn It Down,” among others. Next, a medley of eight lesser-played tracks had hardcore fans excited to hear them played live, starting with “The Artist” and ending on “Broken Stars.” The frontman Told pumped up the crowd between tracks, sometimes with a quick quip and other times with a full-on story. It was easy to see how excited he and the band were to be performing in front of live crowds again. A trio of tracks, “The Ides of March,” “It’s Over,” and “Infinite,” closed out the first third of the night before Told was left alone on stage with an acoustic guitar.

An intimate acoustic performance of “Replace You” came next, changing the pace and allowing the crowd to catch their breaths. Mike Tompa soon joined Told with an electric cello and later a violin on stage afterward. In 2018, Tompa of First Ghost joined the group for live shows. Tompa now also plays the band’s keyboard and guitar. The string instruments added an extra element to “Aquamarine,” “Red Light Pledge,” and “Where Are You.”, The latter of which is a rarely played song for the band from their first studio album.

The rest of Silverstein rejoined Told and Tompa for “Smile In Your Sleep” before another surprise was unveiled. Twenty-one years together, Silverstein now had plenty to celebrate. Told brought out a bottle of champagne on stage to toast the band’s tenure finally legally able to drink. “Tonight is a night of celebration! Yes, this is last year’s backdrop.” He pointed to the canvas behind him that read ‘Silverstein 20 Years.’ “We are 21 years old as a band now, which means we can get fucked up in the state of New York!” Told went to work popping the cork, getting some good distance on it with fans trying to catch the one-of-a-kind souvenir. The champagne was poured out for the band, and whoever had a drink handheld them up in unison.

With time running down, Silverstein gave the crowd more to celebrate with one of their biggest hits, “My Heroine,” before closing out the main set with “Call It Karma.” But, of course, the celebration couldn’t and wouldn’t be complete without an encore. So a short break was all they needed before rejoining the stage. Before closing out the night with one last song, Shane let the building in on a little secret that the band would be back on tour sooner rather than later, joking that a “little bird” had told him. “Not a tweet, like an actual bird.” With that, the band closed out the hour and a half set with “The Afterglow” as fans sang back with everything they had at the group.

Silverstein pulled out all the stops for this live tour. The longest setlist fans had seen from the band allowed them to keep in all the favorites with room for plenty of twists and turns to keep things fresh. New York’s stop acting as both the unexpected end of the 2020 tour and a welcome return for 2021 were able to see two very distinct shows if they had attended both. While it was sad to see the group leave the stage that night, the act will be back soon enough, on tour with The Devil Wears Prada and Erra opening for Beartooth in 2022. In addition, this tour will almost surely introduce fans to their 11th studio album, due out sometime in 2022. 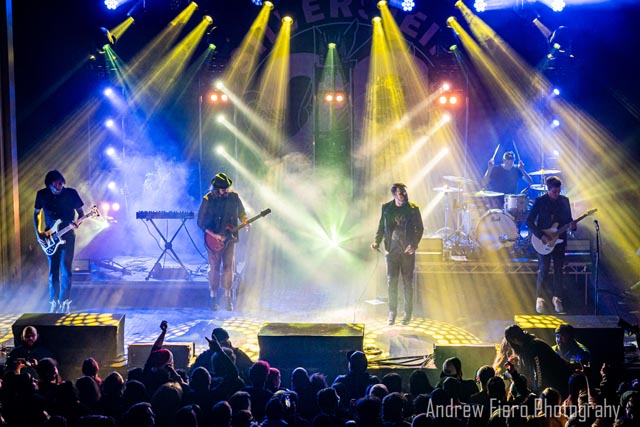 Tags: Cant Swim, Silverstein, The Plot In You