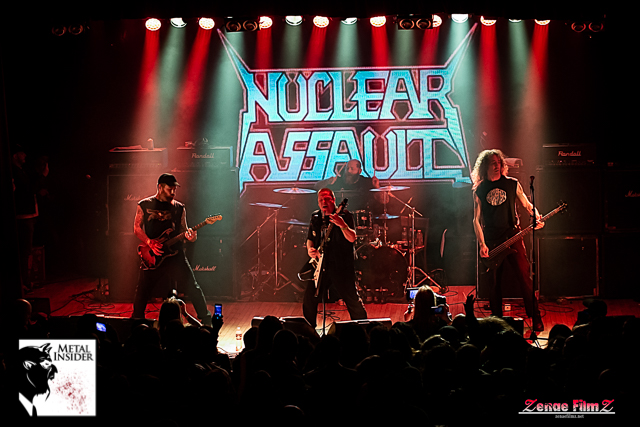 Right before Thanksgiving 2022, Nuclear Assault shared one final photo before removing themselves from social media. While it may have been a surprise to some, these thrash legends have spent nearly seven years professing certain appearances or tours would be known as “the final assault.” After promising one more blast after the next, the group finally decided to cut themselves from the social media pressure, assuring all that their appearance at the UK Deathfest in London, England, in September of last year was their absolute last assault. Bassist Dan Lilker explained their departure in a recent interview with That Metal Interview podcast, stating:

“We’ve been trying to hang it up for a while, but people won’t let us go. I know that people wanna see Nuclear Assault and everything like that, it’s just that… We’re getting a little old, and — I don’t know — it’s different. I just don’t enjoy touring like I used to. Flying isn’t what it used to be. You get fucked around at airports all the time. And I don’t really have patience. If my flight’s delayed or if my bass didn’t make it, for some reason, that shit’s getting old. It’s hard to explain, because some of it’s stuff that we don’t really discuss outside the band or anything. But it’s hard now, because John Connelly, our frontman, he’s a high school teacher. So it’s really hard for him to get away. Obviously, he could get school vacations in the summer, but he’s also got a family. Just because it’s summer and he doesn’t have to teach doesn’t mean he’s gonna run away for a month and not be able to just go do normal vacation shit with his family and everything. So it just gets more complicated like that. He’s been doing that for a while now. So, obviously, he has a teacher’s schedule and he cannot take off from that; they have a very strict vacation thing with the New York education system. So that alone is a big reason that it’s really hard to do it.”

While the door appears shut, Lilker did seem open for a possible reunion in the future: