Earlier this month, it’s been nothing but great news for Slipknot as they finally unveiled the release date for their new album as well as a major summer tour with Volbeat, Gojira and Behemoth, and supporting Metallica’s New Zealand/Australian tour this Fall. However, a few days after the major announcements, things started to shake up a bit in the Slipknot camp.

Percussionist Chris Fehn has decided to sue the band due to money disputes as he claims that the money from the band’s merchandise and touring is funneled through one company that splits the profits to each member of the band. Fehn is claiming that a few bandmates specifically frontman Corey Taylor and fellow percussionist Shawn Crahan has allegedly:

“set up several other Slipknot affiliated business entities in different states that appear to be collecting money from the band.”

For obvious reasons, the band has revealed Fehn is no longer with the group. While both Fehn and the band have been rather quiet, which is most likely due to the current lawsuit, we remain curious as to what happened between Fehn feeling “thankful” to be part of the band on February 19th and removed one month later.

Alternative Nation has discovered a piece of news that has surfaced over the weekend via Slipknot’s Reddit. Additionally, for anyone who has an extensive amount of free time on their hands, you should check out the thread as there are several theories on this subject. While the post has already been removed on Facebook, there’s a screenshot floating around via Reddit of a post that was originally made by former Slipknot guitarist Donnie Steele. While Corey Taylor has publicly shared via Twitter that he’s been wrongfully accused, Steele’s deleted post shows him defending Fehn.

“If you’re talking about Fehn I couldn’t agree more.”

“Nobody likes to get lied to and ripped off. I know first hand. And most, MOST of them can’t write. In the 3 years I toured with them I actually spent more time in writing sessions in the studio then I did on the road….all done behind the other members back. That’s how they roll…”

Donnie Steele is one of Slipknot’s original guitarists who co-founded the group back in 1995. He left the band in 1996 and returned in 2011 as a touring bassist shortly after the death of Paul Grey in 2010. Steele has also worked on the band’s fifth studio effort, 2014’s .5 The Gray Chapter before the group recruited Alessandro Venturella as the band’s official new bassist. 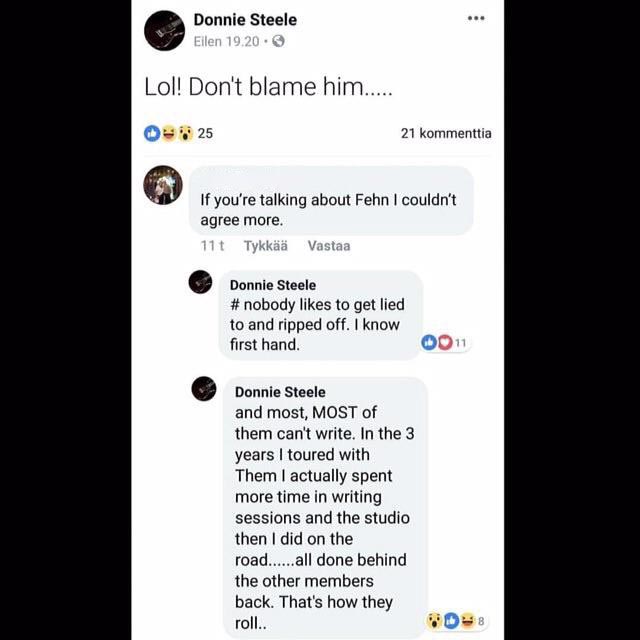