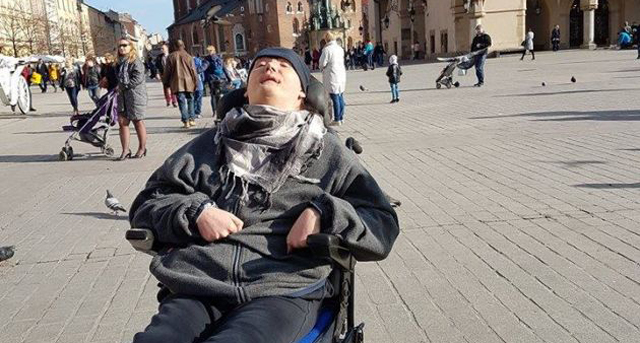 The news was shared in a Facebook update from the campaign’s creator Paula Wehbe, who posted photos of Kowanek in his new chair, along with a long thank you to everyone who helped. Writes Wehbe:

“Adrian Kowanek (Wspieramy Covana) has received his new wheelchair and he is now having his first proper quality time in Krakow square market thanks to your help! Me, Leszek, his mom Ewa and his sister Paulina are very thankful for your help! I’m so grateful I want to thank the ones who really helped me achieving this goal.”

The new wheelchair is a Carony system. Made in Sweden, the chair converts between a car seat and wheelchair, letting Kowanek remain seated while getting in and out of his parents’ vehicle and eliminating the stress and danger of lifting him.

Wehbe launched the campaign back in October in an effort to get Kowanek a new chair to replace his nearly 20-year-old, second hand one that he had been using since his accident in 2007. Initially launched with a goal of €9,500, the campaign raised more than €11,000.

Kowanek was injured in a tour bus accident in Russia back in 2007 that also killed the band’s drummer Witold “Vitek” Kieltyka. After slipping into a coma, Kowanek suffered both cardiac arrest and cerebral hypoxia, which left him completely paralyzed and in a wheelchair.

This is the second campaign Wehbe has created for Kowanek. Back in March she launched a fundraising campaign to help with the family’s day-to-day expenses regarding his care and therapy.

The current campaign will continue on through January 1, 2020. Anything raised until then will go to paying for Kowanek’s various weekly therapy sessions.