With their seventh album, Luminiferous, coming out next week, High on Fire and their frontman Matt Pike are making the press rounds. And while getting interviewed by the increasingly more metal Rolling Stone is certainly a high point, it pretty much outs Pike as a conspiracy theorist to the Dave Mustaine degree.

We knew that the album’s concept was a little over the top when he described album opener “The Black Pot” as being about “aliens abducting people and manipulating our past, present and future. It’s about the top of the pyramid, so to speak. And it’s also about alien hybrids, and how we’ve been immersed amongst this culture of E.T.s for thousands of years, and how no one has woken up to it until recently.” Okay then, but even before he gets asked about the alien subculture, he tells Rolling Stone the following:

It’s not even like, wake up and smell the coffee; it’s like, dude, wake up and realize that it’s not a theory anymore – it’s a fucking conspiracy fact. We’re being manipulated on a daily basis. And yes, 9/11 was an inside job, but that’s like the least of my fucking worries. That was so that everybody could piss on the Constitution. Everybody’s gonna see when they have fucking FEMA camps and the military takes over the general populace. It’s gonna be fucked up. And it’s gonna be NATO; it’s not going to be American military. Because the minute a bunch of marines realize that they’re violating the constitution that they swore to defend, there’s going to be a problem – so NATO will come in and make that not a problem.

Then he gets asked about aliens being the cause of all of the above, and he says that he believes there is an alien component:

Yeah. They’ve lived amongst us since Ancient Sumer. It’s documented, and they knew about all the planets on their way in from the outer solar system. Dude, it’s documented that they lived alongside us! The Epic of Gilgamesh, for instance.

Listen, if it helps him write an album as good as Luminiferous, then Pike can believe whatever he wants to. If you haven’t heard it yet, you can listen to it here and preorder it here. 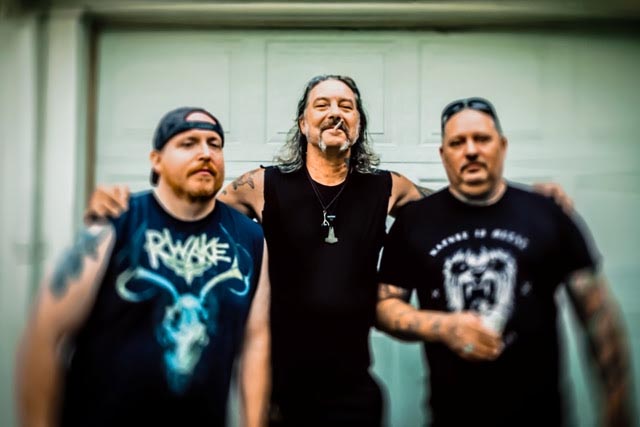