Nowadays, you can associate a handful of stereotypes with the folk metal genre. Yet Metsatöll further differentiate themselves from the pack with their new album, Karjajuht, taking its Estonian folk roots and injecting it with a nice dose of brutal thrash. That’s why we’re excited that we not only had the chance to speak with the band’s Lauri Õunapuu (vocals/guitar/flutes/bagpipes and more), but to also premiere a new song off of Karjajuht (available in North America on May 27 via Spinefarm Records).

Check out the song “Lööme Mesti” in the stream below, followed by our chat with Õunapuu.

Metsatöll is typically categorized as folk metal, yet has been able to incorporate a vast array of musical influences. What did you hope to accomplish Karjajuht that you felt the group had yet to do?

During our gigs, we realized that we were missing a lot of fast songs. And we truly enjoy playing trash metal. So we dug out all our old motives, songs and ideas, added +120bpm and we almost had the tempo of Karjajuht.

Actually, there are absolutely two different sides of making music – onstage and offstage. You may feel it’s best to play in a studio, but sometimes it can’t match [the energy of] moshing and stagediving [at shows]. With Karjajuht, we surely did have some fun in the studio, but I think it really mirrors how the songs will sound when we play future gigs.

If you could go back in time to 1999 when the three original members first met in Markus’ basement to start work on what would eventually become Metsatöll, what would you tell yourself?

“Lauri, be a good boy, it’s me from the future and here is a book of all Bingo and Powerball lottery numbers to the year of 2014. Take it now!”

A key part of Metsatöll’s sound is its use of Estonian folk instruments, and the fact that the lyrics are entirely sang in Estonian language. While this certainly helps you stand out in the metal scene, has it also been somewhat limiting in regards to how fans perceive Metsatöll? Has the band ever considered singing in English to appeal to a larger audience?

I think in nowadays somehow, contrary to mass globalization, there is more honored original cultures and languages and there is a bigger will to preserve traditions and to research them, as maybe people are realizing that cultures are melting together. But everyone wants to be something different and being different also gives to the people one more little answer to the big question: “Why?”

And as a native Estonian speaker, it would be weird if I started to write not-so-good lyrics in English instead of writing better Estonian ones. And, honestly, I don’t think that a folk metal band would ever achieve madly high glory only because it did start to finally sing in English. And of course, there is more Chinese speakers than English speakers. Even Spanish would be wise to consider, when one would want to change a band’s language.

What is the metal scene in Estonia like? How is Metsatöll received in Estonia?

It’s my personal view, but I see that metal is not so popular any more than when it was around 80-90s. It’s not a “fashion hit” anymore and most of the metalheads who went with the flow are doing something else now. In Estonia, there have been very great metal bands and artists, but only a few are still playing.

I see Metsatöll in Estonia as not only about being about metal, it’s not a fashion, not a hit. It’s something to do with being an Estonian, singing Estonian, playing Estonian instruments and saying that we love our homeland. Estonia is very kind to Metsatöll, we have received many music-awards, we are played in local radio-shows, all the albums are somehow in the top of any kind of list,s and our most famous fan is the Estonian president!

How, in your opinion, do you think Estonians interact with music differently than Americans?

People in different places do take in music differently. And of course metal, as music style, is in different positions in the different corners and subcultures of the world. The main difference between Americans and Estonians is that Estonians are roots-centered (it has both positive and negative sides, but of course positivity and negativity depends on interpret). We have lived here for at least 11,000 years. We have songs so old that nobody actually knows how old are they and they are still sung nowadays. And there is a little psychological complex – a member of a small nation cannot say that he/she cannot love their culture/music. He is forced to love his traditions subconsciously. Americans do love their roots consciously, and also enjoy other cultures because they are not tied with them. 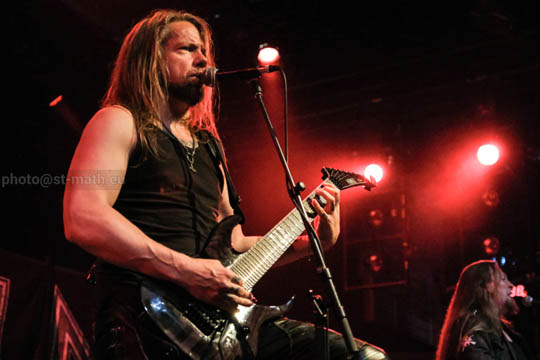