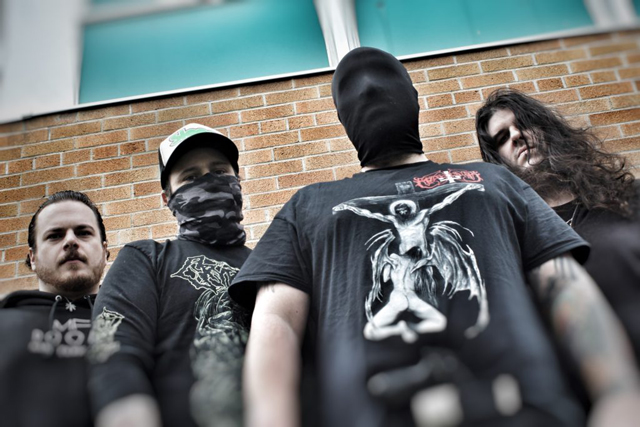 Metal Inside(r) Home Quarantine is Metal Insider’s new column during this time of isolation due to the COVID-19 pandemic. We asked artists five questions on what’s been keeping them busy ranging from their favorite movies, food they’ve been eating, music they’ve been listening to and more. We caught up with Concrete’s Jon Dorn as he’s been spending this time supporting Black Lives Matter and police reform.

So the easy answer is that we’ve been practicing so that when shows return we’re ready to go! We’ve also been playing a lot of video games, while Doug has been busy building a guitar. Then there’s been a lot of marches in our communities in support of Black lives and police reform, so we’ve been attending those and making sure we show our support.

We’ve been checking out Breakout Metal on Apple music and Death Metal Chaos on Deezer because our single “World Tomb” is featured on them. They also happen to have a ton of music by artists we love and admire so that’s been taking care of the heavy aspect. I’ve been listening to a lot of rap on my own daily mixes which have a lot of old Cypress Hill, Viktor Vaughn, Bone Thugs and the new Run The Jewels is incredible.

I’m the cook in my house but since grocery shopping has been sporadic and sparse, I’ve been experimenting with making dishes from whatever I have at home. I can tell you that Ryan and Lenny are making vegan things, because if they haven’t told you… they’re vegan.

Lenny and Ryan put in some decent hours grinding through the new Final Fantasy 7, and for the past 2 days I’ve been completely absorbed by The Last of Us Part 2. The first one was my favorite game ever and I named my cat after a character in the game. As for movies and shows, I’ve been trying to use them as an escape lately, so a lot of nature docs and stoner movies. Ryan has been rewatching the Trailer Park Boys series and Lenny has been watching Toxic Avenger. He’s also been reading a compendium by Nietzsche. Doug has been so busy giving guitar lessons and building this guitar, I don’t think that he’s had time to watch anything.

My advice would be to try and keep a routine and not compare yourself to others right now. Some people are using the time to grind out every chore they have or writing a new record or trying to be super productive, which rules, but for other people that might be difficult for a number of reasons. It doesn’t mean you’re lazy, but people process this whole thing differently. I would definitely read up on everything that is going on in the country right now and see what you can do to be supportive and check the people around you. I also highly recommend spending time with animals. If you don’t have a pet, you’re fucking up. Oh, and jam some CONCRETE and share it with your friends.