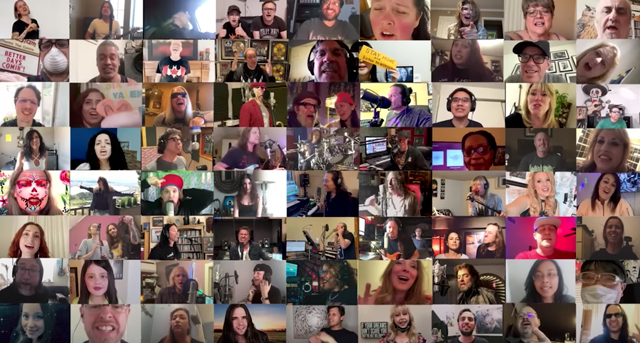 With the ongoing COVID-19 pandemic, we’re all wishing for better days. Now, progressive metal stalwarts Winger, along with some friends, is there to let you know that those days are on their way.

On Monday (27th), Winger released a new rendition of their song “Better Days Comin’” that features a hearty handful of familiar faces from the world of metal and hard rock, as well as family, friends and fans of the band, making appearances. Some of those artists include Alice Cooper, Alan Parsons, Scorpions’ Klaus Meine, Warrent’s Robert Mason, Steel Panther’s Michael Starr, Kix’s Steve Whiteman and television/radio personality Eddie Trunk, among many others.

“Better Days Comin’” is from the band’s sixth album of the same name, released in 2014.

Said frontman Kip Winger to Metal Talks about the album title and song back in 2014:

“Well, it’s funny. It’s more of a sarcastic title, actually. There’s so much shit going on in the world that there’s gotta be better days comin’, basically. How much further down can you go? So there is an element of sarcasm to it, but the song is a feel-good song. The actual track ‘Better Days Comin”, it was our answer to ‘Down Incognito’. When we wrote that, we were thinking that might be a good name for the album ’cause it’s so fresh. There wasn’t any huge concept behind it or anything like that.”

Winger announced last year that they have begun work on a new album. It will be their first since Better Days Comin’. Last year, Kip Winger released a concept album/musical theater project with writer/director Damien Gray called ‘Get Jack,’ a story about infamous serial killer Jack the Ripper.