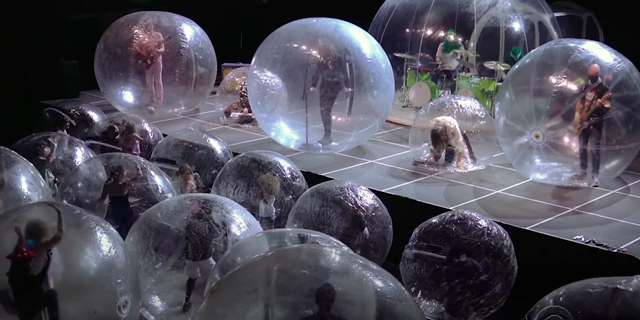 The Flaming Lips have found a creative way to perform in front of an audience while continuing to social distance.

On Wednesday night (10), The Flaming Lips made a guest appearance on The Late Show with Stephen Colbert, performing a rendition of “Race For the Prize,” a cut from their 1999 album The Soft Bulletin. The band performed encapsulated in their own individual bubbles on stage in front of an audience who were also encapsulated in their own individual bubbles.

The Flaming Lips have always been unique performers and inflatable bubbles are not uncommon in their act. Frontman Wayne Coyne routinely ventures out into the audience at shows while secured in what he calls the “space bubble.”

With COVID-19 having ravaged the live music industry, closing down venues all over the world and bringing touring to a halt, many ideas have been floated as to how concerts might be able to happen in the future. However, the only similar idea to the inflatable bubbles has been a concept from Los Angeles, CA design firm Production Club, who developed a spacesuit-like garment with a helmet and filter aimed at protecting concertgoers in crowded venues.

The Flaming Lips announced in March that they will be releasing their sixteenth studio album, American Head, some time this summer. The album will be the follow-up to Kings Mouth, which was released in 2019. In March, the band released a collaboration with garage rockers Deap Vally called Deap Lips. Last month, they released a new single and video, “Flowers of Neptune 6,” which features country singer Kacey Musgraves on back-up vocals.

Video of the performance can be seen below: