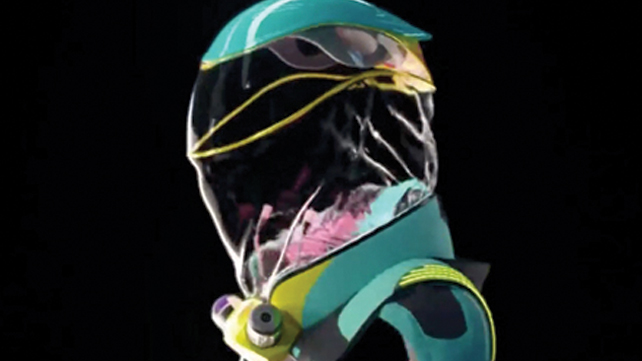 In the wake of COVID-19, many would-be concert goers are apprehensive about heading back out to venues where they would be in very close proximity to others. After all, no one wants to get sick, or for another outbreak to ravage the world.

One design firm is working on a unique solution to ease people’s fears about that very problem.

Production Club, a design firm based out of Los Angeles, CA that usually specializes in creating stages and live experiences in the music, gaming and technology realms, has created a protective suit meant to keep particles away from the wearer at events where social distancing is near impossible.

Dubbed the “micrashell,” the space suit-like garment includes a tight helmet with a N95 filter, as well as LED lighting accents for decoration.

“Micrashell is a solution for bringing people together safety,” said Production Club’s head of inventions Miguel Risueno (aka Mike 808) to NBC 4 New York. “It’s a half suit that kind of takes your safety and your security in terms of being close to airborne particles or viruses to the next level.”

The idea for the suit came about while brainstorming about how the company could help the hard-hit music industry get back on its feet. Said Risuendo, “How can we bring events, how can we bring socialization back in? How can we help the industry not die?”

Though it is a bit utilitarian, the design is also meant to be wearable and allow for maximum partying. Aside from the protective elements, the suit includes snap-in canisters for drinking and vaping so one does not have to take the helmet off if they chose to partake in such activities. Said Risueno of the design feature, “It’s another thing you don’t need to remove the helmet for, because if you remove the helmet and the shield you are now compromised.”

He continues later on in the interview, “We need to make sure that people want to wear it and they feel good about wearing it. “So it’s a little bit more of a fashion piece rather than something that looks like a medical device.”

According to Risueno, the Micrashell attempts to make the return of live events more profitable for venues as well. As buildings start to reopen around the world, they are doing so at less than half capacity to comply with social distancing measures, meaning that only a small, “elite,” fraction of people will be able to attend. “With our solution we are trying to make space available for everyone because our solution depends on your own footprint rather than distancing yourself.”

The way Risueno sees this working, the venue would have a set of suits which they would loan out to patrons and sanitize after every use.

In the end, for Risuendo, it’s about the experience for the concert goer. He concludes, “The most exciting part is being able to have a deeper more emotional, physical connection with the people around you.”

A prototype Micrashell is currently in the works with already “established components,” though a patent for the complete suit is still pending.

Of course, it still remains to be seen as to whether concert goers would willingly go to that next level in terms of protective equipment when it’s hard enough to get everyone to properly wear a face covering, if at all, in public.

Protective suits or not, a full reopening of the concert industry is still at least a year away. Most promoters, including Live Nation, expect live shows to pick back up around mid-late 2021.