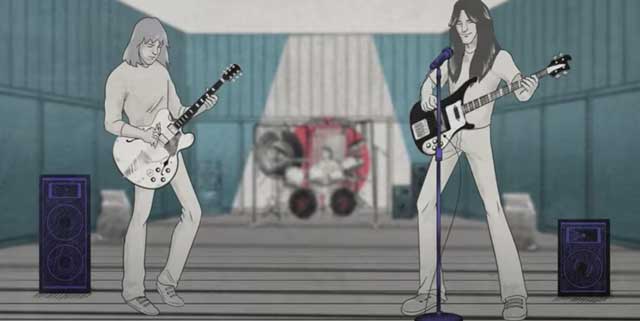 This year marks the 40th anniversary of Rush’s 1980 classic Permanent Waves. To celebrate, the band has debuted a brand new animated music video for the album’s first single “The Spirit Of Radio.”

“The animated video captures the magic, spirit and growth of the FM radio format with a nostalgic nod to the pioneering DJ’s broadcasting music into homes around the world,” the band wrote in a statement announcing the video. “The video also pays homage our late brother and fellow bandmate Neil Peart whose music and lyrics continue to capture the hearts and imaginations of the fans.”

The video is dedicated to the band’s drummer Neil Peart, who passed away In January 2020 at the age of 67 following a battle with brain cancer. A scene at the very end of the video features an illuminated animated drum kit with the dedication, “In memory of our brother Neil Peart.”

Rush’s seventh studio album, Permanent Waves was released in January 1980 and proved to be one of the band’s most popular releases. The album went on to peak at number three in their home country of Canada and numbers three and four in the UK and US respectively, as well as gain platinum status in both Canada and the US. It’s first single, “The Spirit Of Radio,” has been listed as one of the Rock and Roll Hall of Fame’s “500 Songs That Shaped Rock and Roll.”

Watch the animated video below:

Growth Rings, a short film co-written by the late Neil Peart was also released on Friday (12).

“Watch “Growth Rings,” which Neil Peart co-wrote with Jeremy Bout @EdgeFactorShow and did his own voice over. The short film—created in collaboration with @dwdrums — honours the way in which music marks moments in our lives.”