“Nedal” band Okilly Dokilly earned the highest honor of any The Simpsons tribute act this past weekend when their video for “White Wine Spritzer” was featured during the end credits of Sunday’s (April 7) episode, “I’m Just A Girl Who Can’t Say D’oh.”

“Myself and everyone involved with Okilly Dokilly are so very honored. The fact that the ‘White Wine Spritzer’ video appeared on an episode of ‘The Simpsons’ is still unreal to us. We are very excited and beyond humbled to have been a part of the show’s legacy.”

Named after Ned Flanders, the overly nice Christian next-door neighbor of the Simpsons clan, Okilly Dokilly burst onto the scene in 2016 when their single “White Wine Spritzer,” the lead single from the band’s debut album Howdilly Doodily, went viral. To date, the song’s video has been viewed more than five million times.

“We saw the video and knew they had to be on the show. We do not endorse their message of indiscriminate drinking of white wine spritzers.”

Starting out as a reoccurring animated sketch on the Tracy Ullman Show, The Simpsons debuted as its own stand-alone show in 1989. The show is currently in its 30th season, making it both the longest-running American animated program and the longest-running American scripted prime-time series. Earlier this year, it was announced that The Simpsons was renewed for at least two more seasons. 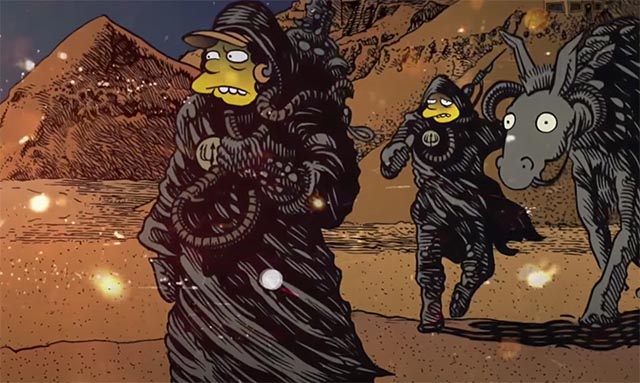