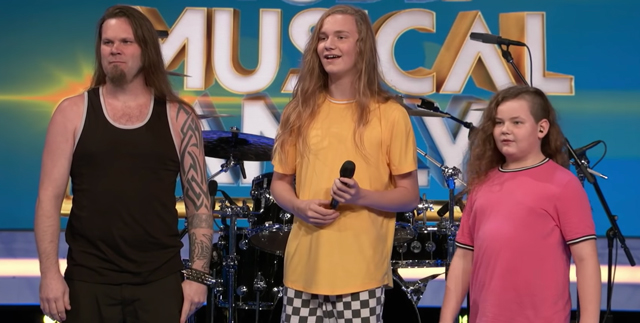 Nickelodeon jumped into the reality music competition this past November with their new show America’s Most Musical Family, offering 30 families the opportunity to win a record contract with Republic Records, and a $250,000 cash prize.

Most acts in the audition round were as you would expect, with songs ranging from full Acapella to light guitar and piano riffs.

Then… The Harris 3 happened!

During the December 6th airing, of the final audition round, Jason Harris, and his two sons, took to the stage to perform Smash Mouth’s 1999 hit song “All Star.” In what can only be seen as shock and awe by the judges, 11-year-old Trent Harris, channeled his inner demon to put down a deep vocal grindcore making the judges speechless.

David Dobrik was first to speak stating “he’s never seen death metal… EVER, especially live”. Followed by Ciara who gave them credit for taking the chance playing a style and genre that no one else had played.

To learn more about the band, and keep up to date check out their Facebook or website here.