The Adam Dubin directed documentary Murder in the Front Row is based on the 2012 book, Murder in the Front Row: Shots from the Bay Area Thrash Metal Epicenter, by photographers Brian Lew and Harald Omen. The title stems from a lyric on Exodus’ debut album Bonded By Blood, which states, “Murder in the front row, crowd begins to bang. And there’s blood upon the stage. Bang you head against the stage. And metal takes its price, bonded by blood.” The line of course, depicts what the thrash scene looked like when it blossomed in the Bay Area during the early eighties. Dubin is no stranger to the thrash scene as he also directed several Metallica films over the years. In essence, 2014’s Hit the Lights: The Making of Metallica Through the Never, S&M Documentary(2000), Metallica: Cunning Stunts (1998), A Year and a half in the Life of Metallica (1992), as well as Metallica’s “Nothing Else Matters” music video. With someone who has vast knowledge on the scene and extensive history with one of the big four thrash bands, it’s no secret that Murder in the Front Row is one of the best documentaries on the birth of thrash metal.

The Documentary is now available in 4K and HD on streaming platforms. A special Deluxe Edition DVD is also available, consisting of over ninety minutes of never-before-seen bonus footage, including an interview with Metallica, behind-the-scenes-footage taken at the infamous Berkeley venue Ruthie’s Inn, a director’s commentary, and more.

Murder in the Front Row is for just about anyone: from die-hard thrash fans to those who are just getting started with heavy music, and more. It highlights Metallica’s move to the Bay Area, leaving Los Angeles, a glam-metal destination at the time. As these bands (Exodus, Metallica, Testament, Death Angel, Slayer) craved something hard, heavy, dirty, and mean. Another avenue this film has showcased is how similar our metal gods are to us. The thrash scene started as a group of dudes who share the same passion for heavy music, aka they are just like the rest of us: fans of metal.

The animations, graphics, and overall pacing of the film will not only keep the viewer entertained; it sucks you back into the late seventies/ early eighties giving clear visibility of what the scene looked like. Additionally, it would make one understand why Gary Holt performed with Slayer after guitarist Jeff Hanneman died in 2013 as Holt explained how they’ve always been his buddies. Although the reason behind Dave Mustaine’s departure from Metallica was omitted, the film highlights Mustaine and how Megadeth started. Along with how eager he was to be “much faster” than Metallica.

The documentary swings back and forth with many interviews consisting of members of Metallica, Slayer, Anthrax, Megadeth, Death Angel, Possessed, Exodus, and Testament. Additionally, the film is narrated by comedian Brian Posehn. The interviews and stories go beyond the musicians as there are many surprises throughout the film.

One crucial moment was when Metallica frontman James Hetfield received a wake-up call from concert promoter Bill Graham. Graham called Hetfield after the group carelessly trashed their green room after one of their most notable performances in Oakland at Bill Graham’s Day on the Green in 1985. Graham reminded the young Hetfield how artists who enjoyed life on the wild side, including The Who drummer Keith Moon, ended up not living long. This phone call was the pivotal moment for Hetfield when he knew it was time to grow up.

There were also a few tear-jerking emotional segments when the film honored the late Exodus vocalist, Paul Baloff, who died in 2002 from a stroke as well as remembering the late Metallica bassist, Cliff Burton, who died in 1986 from a bus accident. There was a moment when bassist Robert Trujillo explained how much it meant for him to perform Cliff’s parts during Metallica concerts to keep his memory alive. And these are just a few highlights from the film, which we suggest you should watch in full and add to your metal documentary collection. For those who love thrash metal, this is a must-see.

Metal Injection caught up with director Adam Dubin and had a lengthy discussion on the film. One of the questions involved how long it took to complete the documentary:

“That meeting between Harald, Brian and I, where we agreed on the idea, was in the spring of 2016 and I started filming that summer. I started with an agreement from Metallica. I called up their management and asked, “If I make this film will you guys sit for me?” They were like “Yeah, but they’re not going to be the first interviews.” I didn’t even want them to be first; I wanted to talk to a lot of other people before them. So, in the summer of 2016, I started with a lot of the old-school thrash metal scene people who were there but whose names aren’t really as famous. Probably, the most famous person I got to straight away was Ray Burton, the father of Cliff Burton, who recently passed away. He became more well-known and something of a celebrity himself because of his carrying the torch for his son. He had a great interview. So, I had him and a bunch of the fans and I just kept coming back to the Bay Area.

I live in Brooklyn, I’m a Brooklyn-based filmmaker and somebody might think it’s odd for a Brooklyn filmmaker to be telling this story, but in a way I think it was also organic in that I had an outsider’s remove from it. I was able to look at it from the top down and see it from the outside. I had a certain perspective in that I had also been in a scene itself with the Beastie Boys and the like. When the Bay Area was going on in the ‘80s I was involved in a very different scene in New York which was the punk scene that morphed into the hip-hop scene. I was there for that and understood the idea of a “scene” very well. So, we kept filming and it was kind of like a snowball. The more interviews I did, the more people heard about it. This network of Bay Area fans still talk to each other and they’re still a tight-knit community where they go to dinner with each other and talk and hang out. It started to build very quickly that we were filming this and that we were getting it right. That sort of rolled all the way towards Gary Holt, the first “celebrity” interview we got. Slayer was still going at the time and they were on tour in Reno and Gary Holt said he would sit for an interview. What happened was like a domino effect, and I have to credit Gary who might have said a word to Tom Araya who was then like, “I’ll sit for an interview.” Then, it filtered down to Paul Bostaph, who used to be in Forbidden, and then Kerry King came along and suddenly I had all four guys from Slayer. That right away lifted things as each step made it more legitimate and more real. So, onward we went. I never let up on interviewing those people who were involved in the scene but weren’t musicians or famous people and in keeping that credibility, we were able to keep on with it. So, to answer your question [laughs], we started in summer of 2016 and the movie was finished and premiered in April 2019 and did its screening run afterwards.”

Testament guitarist Alex Skolnick shared an unboxing video of the Murder In The Front row special Deluxe Edition DVD, which you can view now:

Watch a few clips below and order your copy at this location: 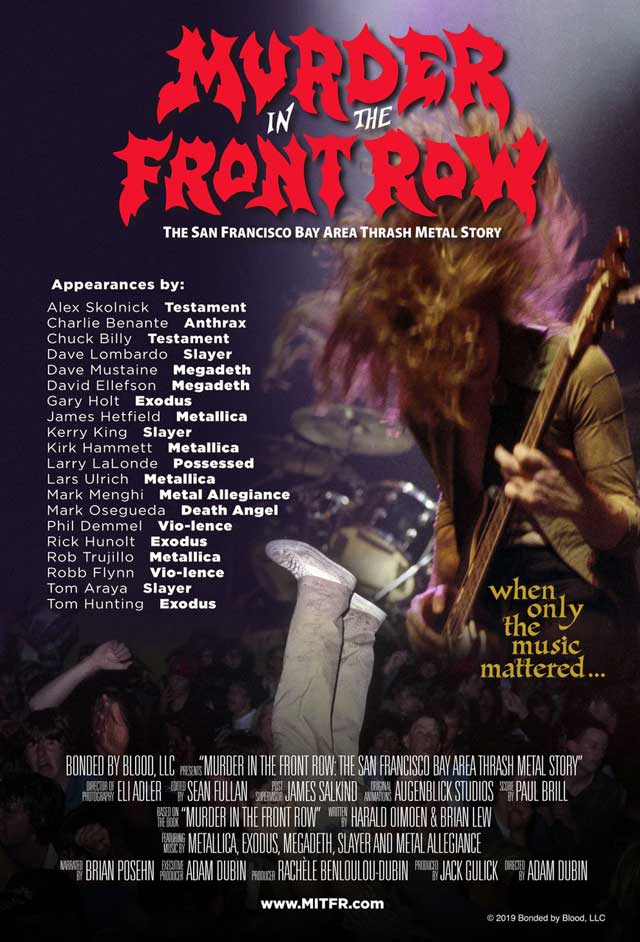 Tags: Murder in the Front Row