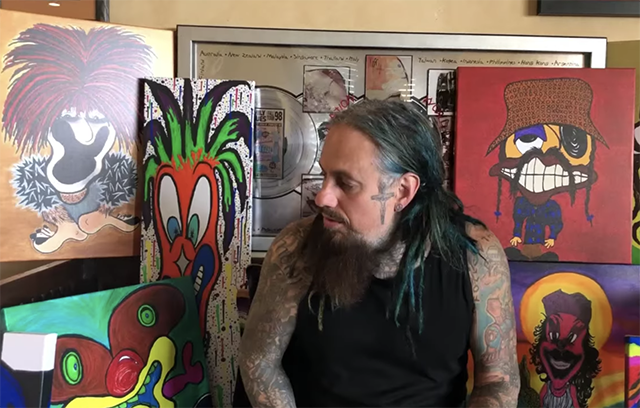 KoRn bassist Reginald “Fieldy” Arvizu is auctioning off 10 of his mixed media paintings. The announcement was made in a Facebook video posted Monday (April 15), where he is surrounded by his creations.

The paintings are of what Fieldy calls “Izms.” According to the video, these creatures have their own names and are painted with various different medias, including slime and glue, to get different textures. Each one is on metallic canvas and range in size from 16 to 36 inches.

Fieldy said the following in the announcement video:

“From February 2018-February 2019, during a difficult time in my life, I unexpectedly began a journey of mixed media painting on canvass. The result are these 10 characters I created that I call ‘Izms.’ Without any real knowledge of what I was doing, I just dove in and found a place of creative peace. Now I’m excited to share ‘Izms’ with you.”

This limited run of paintings is up for bidding on eBay. You’ll have to shell out a pretty penny for these artworks though, as the bids are currently topping out anywhere from $260 to $800. The artworks will be available to bid on through Sunday. Links to the eBay listings are included in the video’s description.

KoRn released their latest album, The Serenity of Suffering, in 2016 and are currently working on a new one rumored for release some time in fall 2019. The band will be heading out on the road for a North American co-headlining tour with Alice in Chains this summer starting in mid-July. KoRn also has a series of festival dates coming up, including Welcome To Rockville, Epicenter Fest and recently replaced Ozzy Osbourne at Rocklahoma.