Slayer’s farewell tour continues to creep ever closer to its conclusion. On Wednesday (May 29), the band announced that they would be headlining this year’s Riot Fest, an appearance being billed as their final “Chicago and Milwaukee” show.

The news comes with the announcement of Riot Fest’s official 2019 line-up. Celebrating it’s 15th anniversary, headliners for the Chicago festival include Slayer, Blink-182 (who are making up for their 2018 cancelation), Bikini Kill (who are reuniting for the show), The Raconteurs (in their first Chicago date in 11 years) and Rise Against. Other highlights include a farewell set from The B-52s, full-album performances from Taking Back Sunday (‘Tell All Your Friends’ & ‘Louder Now’), The Flaming Lips (‘Yoshimi Battles the Pink Robots’), Ween (‘The Mollusk’), Bloc Party (‘Silent Alarm’), Glassjaw (‘Worship and Tribute’), Against Me (‘Reinventing Axl Rose’ & ‘Transgender Dysphoria Blues’), Avail (‘Over The James’), Senses Fail (‘From the Depths of Dream & ‘Let It Enfold You’) and more, as well as sets from Rancid, Jawbreaker, Die Antwoord, Anthrax, Patti Smith & Her Band, Descendents, Lucero, Testament, Andrew W.K., GWAR and The Damned Things, among many others.

Riot Fest takes place September 13-15 at Chicago’s Douglas Park. Tickets are on sale now. Daily line-ups and set times have not been announced yet.

Slayer continue on their ‘Final World Tour’ with dates booked through October 11. The band finished up the final full North American leg of the tour this month and will be heading to Europe next from June 4-July 13 for a run of festival and arena dates. That will be followed by a few more festival dates in Canada, the US, Germany and Brazil, including CHAOS AB, Heavy Montreal, Wacken Open Air and Rock In Rio. Their final show ever is currently scheduled to be at EXIT 111 in Manchester, Tennessee. 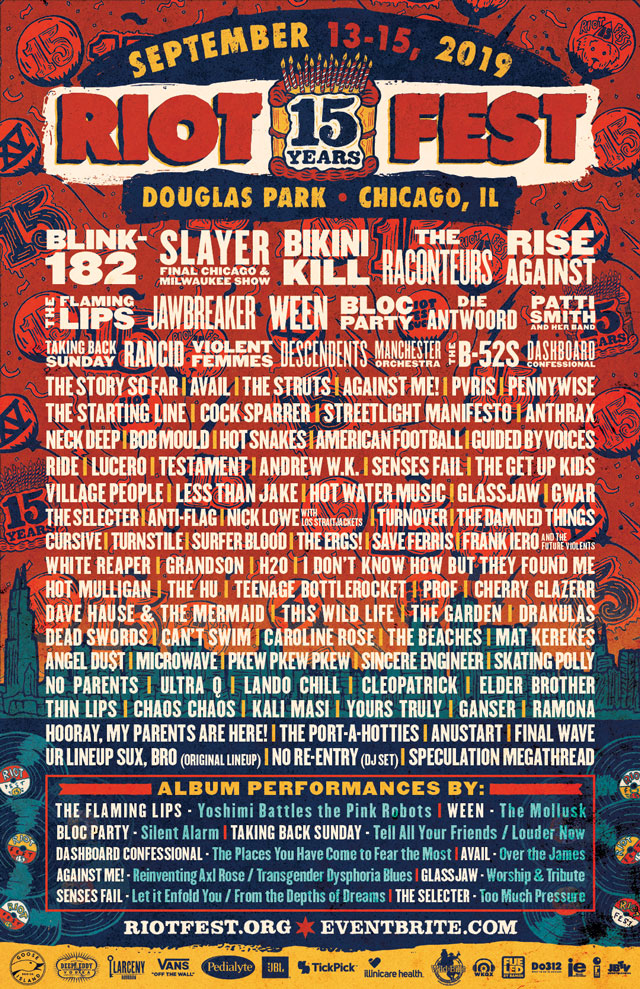