33 years in the making, last nights Riot Fest in Denver closed out with the historic reunion of Misfits with Glenn Danzig, Jerry Only, Wolfgang Doyle von Frankenstein, with former Slayer drummer Dave Lombardo hitting the skins. The 25-song set touched on the band’s entire original 1977-1983 catalog, with video showing the audience enthusiastically singing along to songs that were last played with Danzig, Only and Doyle before many of them were born. The band had plenty of swagger, and seemed like they were having as good a time as the audience. If the Denver Riot Fest show was the original lineup testing the waters, Chicago Riot Fest fans are in for a great time, and there’s definitely an appetite to see more shows.

Bullet
She
Night of the Living Dead 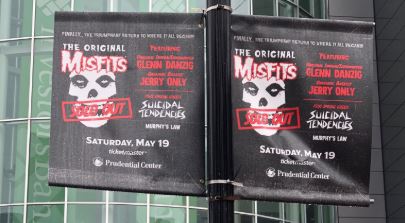