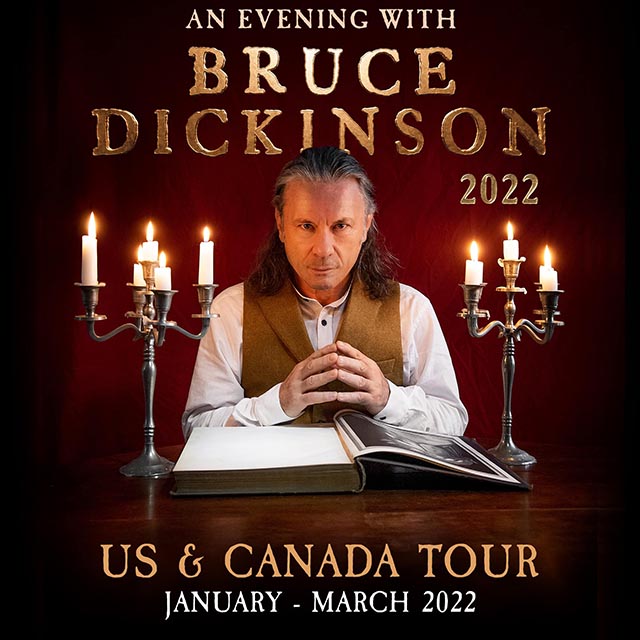 Iron Maiden’s frontman-iac Bruce Dickinson has decided to bring his spoken word tour here to the United States for a two month run. Spanning January through March, the vocalist, aviator, writer, fencer, actor, will cross North America and Canada to share stories of his life with his fans.

“Split into two parts, the first section of the show sees Bruce taking a humorous and often satirical look at the world from his own very personal perspective, treating the audience to private insights into his drive and ambition, peppered with plenty of Maiden anecdotes, and a myriad of other experiences encompassing not just the giddy heights but also the extreme lows, told first-hand in his inimitable anarchic style, punctuated with photographs and sometimes even erupting into song a-capella, to illustrate a point,” an official announcement reads.

“The final section of the evening is devoted entirely to a Q&A session, with the opportunity to pose questions on any subject whatsoever. As Bruce’s answers will all be completely improvised – the more left-field and quirky the question, the more interesting and compelling the response is likely to be!”

Finding tremendous success with his spoken word tour in the UK Dickinson had this to say about it,

“It’s hopefully reasonably amusing. It’s a look at how a spotty kid from the middle of nowhere ended up being the singer in IRON MAIDEN wearing crazy trousers, and all points in between. And it covers the cancer thing. It covers a lot of the early-days stuff, like how I learned to sing, all the weird stuff that happened to me at school and what formed your personality [and] character — all done with a very dark sense of humor, I hope. And then we take a break, and then the last 45 minutes, one hour-ish is basically improv. And so what I do is I take cue cards from the audience they write on the night, and I arrange them into kind of an improv script. Then I do that. That’s the show.”

Tickets go on sale Friday, November 5th for these dates: