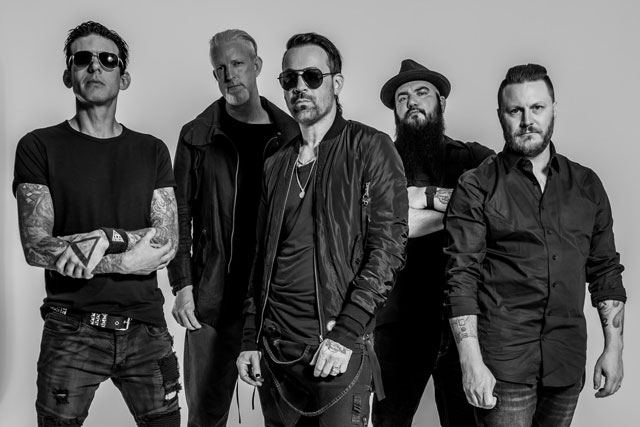 There’s been a new wave of activity circling around the nu-metal act Adema when it was just two years ago, we were shocked to see movement on the group after they announced the return of original vocalist Mark Chavez. However, we haven’t heard much since including new music. The group’s latest material was their 2013 EP Topple the Giants, which featured guitarist Tim Fluckey on lead vocals, and they haven’t released a full-length album since 2007’s Kill the Headlights that had Bobby Reeves behind the microphone. Regardless, we remember them for their 2001 self-titled debut known for Chavez vocals as he’s the half brother of KoRn’s Jonathan Davis.

Read the full message below:

I have a very special announcement.

Let’s cut to the chase:

I am going to assume the “frontman / lead singer” position with my good friends in ADEMA this Fall on a major tour and even more one-off’s towards the end of this year. Yes, you heard it correctly. AND I am still executing Julien-K’s Harmonic Disruptor schedule and business w zero “disruption” (clever right!?)!

In fact: Amir is helping me do it (more surprises there later!).

“WTF am I thinking?”

Well. Let me tell you:

As many of you know, my first band ever, SEX ART, from Bakersfield & Taft CA, was formed in my teens with some of my longest lasting friendships – Jonathan Davis & David Deroo. In many ways I feel like I’m performing w a group of my childhood best friends. I have been a fan of Kris Kohls since Cradle Of Thorns – OVER 25 YEARS AGO – when we were teenagers! The rest of the ADEMA guys have been part of my life for 16+ years. I’m having so much fun interpreting this amazing music in my own way – music that I am a personal fan of – I cant even describe the high. I simply could not sit back any longer and let my brothers music LINGER without bringing it to the fans that love this band as much as I do. You guys deserve it – the band deserves it – I fucking LOVE it.

I wouldn’t do this without addressing my other brother Marky Chavez. The proverbial “elephant in the room”. I KNOW fans love him. SO DO I.

Last year, on the very very “DL”, I was personally engaged in a major effort to put ADEMA back together – THE WHOLE BAND. I spent a lot of time working on this. These guys are my brothers. I love them. ALL of them.

I can be VERY convincing (as Mike Ransom has pointed out in many very funny situations), and I desperately wanted the band to go out a tour again, make new music, and live the life we all built. I love Marky and I love his voice. I personally talked to him on multiple occasions, sometimes for a few hours, trying to figure out why the band just couldn’t be “all together” and tour.

The conclusion of my efforts: Mark DOES. NOT. WANT. TO. DO. ADEMA. PERIOD.

He told me calmly and clearly. He told me point blank. He does not want to sing to this music anymore. So I stopped pushing him and the band, and I went on my merry way to handle my Julien-K workload and new album release. I was sad that ADEMA was not going to be out playing for their fans.

….. Until I got a totally fucking random call from Kris Kohls a few weeks ago which got me wondering…. “Can I go out and perform with my brothers and do an amazing job for the band and the fans”? “Can I do the music I love justice?” ADEMA got offered ANOTHER great tour with some GREAT bands – and they wanted to do it RIGHT. The whole band, with a real frontman that can really “do it”…. Could I do it????” “Would I be willing to do it???” “would it be FUN?”

The answer is YES. So I am going to do just that. And I’m going to do it with LOVE & GRATITUDE. I know the ADEMA community has essentially not been able to count on anything solid for … maybe 10+ years? I want to end that. Now.

So. Starting this SEPT, I’m going to do “my thing”, with my brothers in ADEMA (the entire original band) as they do “they’re thing”, onstage, 5-6 nights a week, throughout the USA, for what may be a once in a lifetime experience: ADEMA + RYAN SHUCK. Please join us this fall – It’s going to be amazing.

We will have special VIP and merch offerings to commemorate this truly exceptional collaboration and experience. I can’t wait to see you!!!!

ADEMA fans: If you don’t know me, prepare to have your fucking faces melted. And prepare to LIKE IT. Your support of this band means EVERYTHING!! And we thank you!!

JULIEN-K fans: FEAR NOT. The Supreme Commander has not left the building ………!!! JKHD IS COMING SOON. The possibilities are now ENDLESS.

ThePrp reports, Adema will be part of The Days of Disorder Tour this fall, which includes Powerman 5000 headlining with support coming from (hed)p.e., Adema, and the Genitorturers.