If you’ve been reading my work here for the past number of years you know where I stand on free speech and free expression. The nauseating politics of cancel culture have tried to ruin the global metal scene for years now, and thankfully, bands like Uada have persevered in the shadow of misguided hostility. It was only two years ago this Portland-based band was absurdly accused of Nazism and faced the salivating outrage mob. That mob much more closely resembles the fascist leaders of the past than they are capable of realizing (or would ever admit) and this is just one reason why critical thinking needs to be more readily introduced into educational systems. But that’s a story for another time as the news here is the brilliance of Uada’s latest offering.

Thankfully Uada didn’t back down one bit from ignorant over-the-top and too-quick-on-the-trigger radicals who tried to get them “cancelled,” and they not only toured successfully after the incident but also crafted, perhaps, the most important record of 2020 with Djinn. Yes, musically and lyrically Djinn is just that good.  This isn’t overhype because you know we just don’t do that here.

First, let’s address the most recent single, “No Place Here,” which is, undoubtedly a statement about misguided activism and the ugliness of the hive mind. It’s a 13+ minute song that is so expertly crafted. Extremely thought-provoking and unabashedly genuine in it’s delivery, Uada decided to put it all out there and this magnificent opus has been released to the masses at just at the right time.

Don’t believe me that Uada would put out something like this? Check out this lyric from the first verse:

Of course, interpret it as you wish, but this lyric resonated with me so much.

It is just an epic song and every verse is so bitingly brilliant, but I am especially fond of the post-crescendo at the last three minutes (starts at 10:27) where Uada just lets it all come out in poetic frankness:

“I cannot see myself in this world being found, among those who claim down is up while others swear that up is down

There is no knowledge of the inhumanity once withstood, that could cease those from weaponizing their own victimhood

Where logic holds no validity over emotion, it is the taste of entitlement that detracts the relevance of their devotion

And it darkens the sense of a greater understanding, when they’ve fallen deaf to all dialogue other than their own demandings

And they focus their faith into a chosen form of extremism, like a swinging pendulum, the behest of a subconscious hypnotism

To insist immunity in the light of a false alliance, squealing foolishness to accompany the continued acts of their defiance

In the end they’ll hear only what it is they want to hear, the weakening words of a failing campaign in which they choose to smear

The only consistency found can be within their own doubt, as they descend with communal ad hominem channeling casuistic clout

The most privileged protect their political pose, polarizing personal principle and propagating a platform for their phony prose

A fictitious brotherhood, a fraudulent kin, only projecting outward what it is that they so feel within

There is no reflection, restraint or redaction, to those who cannot take responsibility for the contamination of their own action

And they push their concepts of identity upon us all, out-thrusting nonsense so that they may have a sword on to fall

And we wait for the cowards to take their leave, for there is no trust, no virtue and definitely no honor among these thieves

Where every step is a contradiction to their last, a promenade on display, a forward march into their past

Through the intolerance of their desperate disposition shown, becoming disenfranchised by the infantile climates in which they’ve thrown

Not to be overshadowed though, is the band’s earlier single “Djinn,” which features a more evolved, more integrated sound than their earlier offerings.

There a bit more layers in this track than we’re used to from Uada and it works extremely well. There’s a bit more melody as well and less reliance on tremolo, but thankfully, the tremolo is still there and it’s still amazing. Vocals are still bleak as ever but with some varied tonal changes here and there. I love this band’s evolution.

Notice there’s a bit of groove in the title track and that groove comes back again in songs like “Between Two Worlds,” which even features a bit of a rock beat. Of course, I wouldn’t say that this is about making Uada “more accessible,” because this band is always going to be in the underground; rather tracks like this show how the band is unafraid to pull from more influences than they had in the past. Tracks like this one are versatile and dynamic.  It makes for a more interesting listen.  Mainman Jake Superchi is really at the height of his creativity here. “Between Two Worlds” is an epic, signature song and I can only chomp at the bit for COVID 19 to settle down so I can hear this absolute masterpiece live.

“Forestless” also has that same bit of a rock vibe, with lots of space for the bass guitar and just a profoundly professional job in the mixing so that all of the elements of the sonics come forth. Atmospheric, of course, the build in the early part of the track paves the way for the tremolo and pummeling blast beats that commence about two and half minutes in. This track alone is worth the price of the vinyl.

“In the Absence of Matter” has that groove again and some great riffing interspersed with Uada’s well-established bleakness. Appropriate time changes and discordant sonics are also abundantly present that will certainly make the Uada fan completely satisfied.

Overall Djinn is a five-star record. Six tracks with zero filler.  It’s all heartfelt, it’s all emotion and it’s all real.  It is, thus far, the apex of an impressive career. Djinn is going to be Uada record that metal fans will be talking about for decades to come.

Djinn is available for pre-order via Eisenwald Records now. Physical release date is September 25, 2020. Buy a shirt for every day of the week as well while you’re at it. 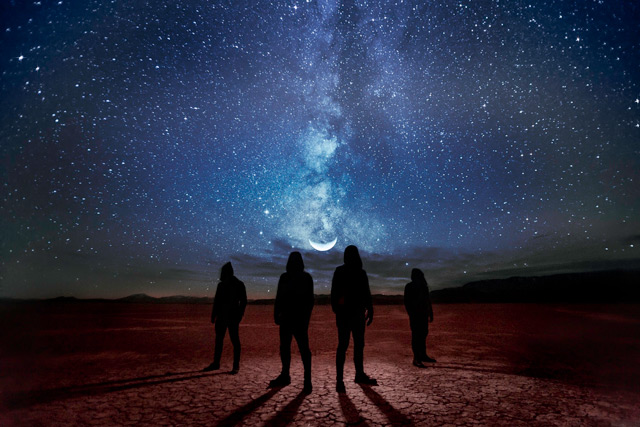